The liberal media and Hollywood left are telling you the Capitol riots were “atrocities,” an “armed insurrection” and “violent sedition against our government” and trying to link all Trump supporters to them. But last summer they were praising, defending, and donating to the Black Lives Matter movement which led to more violence against innocent Americans and the country than Capitol rioters could ever dream of doing. 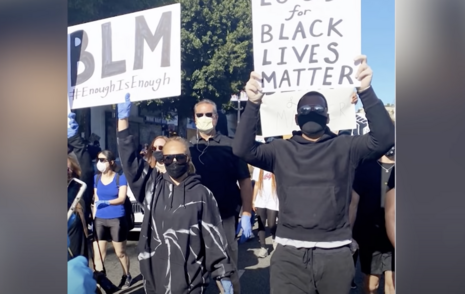 Over 50 Hollywood celebrities celebrated one set of riots and criticized the other. Famous people like Rob Reiner, Ron Perlman and Seth Rogen claimed that the events on January 6 were a “deadly insurrection,” or “violent protests” performed by a “violent mob” in order to “hijack democracy.” Others, like music legend Stevie Wonder, called them a “violent sedition against our government.” Comedians Trevor Noah and Patton Oswalt linked GOP leaders who questioned the integrity of Joe Biden’s election victory to the riot, calling them “Heroes of the insurrection” who incited the “animals” that broke into the building.

Some like singer Jennifer Lopez and pop star Halsey went to BLM marches, some of which were violent. Radical lefties like actress Gabrielle Union made claims like, “It’s not enough to just say Black Lives Matter, it’s time you show it.” Similarly, singer Lauren Jauregui stated, “Not taking a clear anti-racist stance at this point is a clear siding with the oppressor.” Even Comedy Central host Trevor Noah rationalized widespread looting in the wake of BLM, “If you felt unease watching that Target being looted, try to imagine how it must feel for black Americans when they watch themselves being looted every single day. Police in America are looting black bodies.”

But Trump’s words are the only ones that incited violence. Sure.

The Black Lives Matter movement led to over violent riots in over 140 cities, $1-$2 billion in property damages, and the killing of nearly 30 people, including retired police captain David Dorn. But because “#BLM” was a vehicle for the progressive agenda (approved by Dem politicians and mainstream media,) they defended it regardless of its damage to innocent Americans and the social fabric of the country.

Here are stand out examples of this double standard:

In a stunning display of hypocrisy, at least five of those who condemned the Capitol riot donated bail money to get people arrested during BLM protests out of jail. Chrissy Teigen, Patton Oswalt, Seth Rogen and Don Cheadle each donated money to a bail fund organization titled the Minnesota Freedom Fund (MFF), which paid the bail for protesters locked up during the protests.

Teigen herself donated a whopping $200,000 to the fundraiser, which no doubt helped get many people out of jail. But when it came to the Capitol rioters Teigen came down hard on them, condemning them for believing Trump’s lies. She also retweeted articles which referred to them as “racist ass terrorists.”

Patton Oswalt blamed Trump for “inciting” the “animals” at the Capitol riot, but paid $50 to get BLM rioters out of jail. By his logic, Oswalt could be seen as helping to bail these same kinds of “animals” out. Well Oswalt would disagree; only Trump supporters are animals.

Seth Rogen signaled that he donated $50 to the MFF, and in a follow-up, clarified that he would give “much more.” But as far as the Capitol riot went, Rogen claimed that politicians were “inciting violence by making people believe their democracy was stolen.” He added, “Until they acknowledge there was NO evidence of mass voter fraud, their followers will continue to plot.” So Rogen’s bailing out rioters, but condemning others for words that may or not be responsible for violence?

It’s simple. These GOP “leaders” NEED to acknowledge they lost the election. If they don’t, they’re inciting violence by making people believe their democracy was stolen. Until they acknowledge there was NO evidence of mass voter fraud, their followers will continue to plot.

Remember, Trump told his supporters to “walk” “peacefully” down to the Capitol to protest. But Rogen and company get to smear him as inciting violence, while they get away with paying for violent or lawbreaking protesters to get out of jail.

Celebrities like Julianne Moore, Piper Perabo, Kesha, Debra Messing, Bryce Dallas Howard, Mark Duplass and Olympic gymnast Ally Raisman were all united in their claims that Trump’s lies had led to the “insurrection” that was January 6’s Capitol riot, but about six months prior they were giving emotional PSAs filled with lies about police officers “slaughtering” African-Americans.

In an insipid video from June 11, 2020, several of these Hollywood hypocrites lamented the plight of African Americans at the hands of cops. One of the key claims of the video, which was no doubt intended to provoke outrage from audiences, was delivered by actress Julianne Moore. She stated that “Black people are being slaughtered in the streets.” Of course crime statistics don’t support the notion that cops are targeting African Americans in American streets and killing them, much less targeting and killing innocent African-Americans.

regret to inform you the celebs are at it again pic.twitter.com/pfORBiqvrX

Considering rhetoric like that inspired over 140 violent riots, wouldn’t each of these Hollywood morons be considered inciting violence? If Trump’s claims incited violence, then these lies and hyperbole about American law enforcement are at the very least just as bad.

Either way, Julianne Moore promoted these lies but stated that Trump must be “held accountable” for “inciting violence and enabling extremism.” Pop star Kesha argued that Trump’s incitement of the Capitol mob meant that Congress should “impeach the president." Piper Perabo tweeted out an article which claimed Trump’s so dangerous he should lose the nuclear codes. Debra Messing applauded on Twitter that there was a potential criminal investigation into Trump’s speech. Mark Duplass touted “horrific events at our nation’s capitol [sic].” And olympian Ally Raisman retweeted Michelle Obama’s statement that the Capitol riots were a “fulfillment of the wishes of an infantile and unpatriotic president.”

President Trump must be held accountable for inciting violence and enabling extremism through lies and conspiracy theories. He is a threat to democracy & American lives.

Send your member of Congress a message to remove Trump from office immediately. https://t.co/srMzYaLHwu

But of course these folks didn’t contribute to any “horrific events” that ensued from their rhetoric.

All 2020, lefty activists in the media like Michelle Obama exhausted themselves in attempts to separate the message of Black Lives Matter from the frequent riots that broke out in its name. But some of them threw consistency out the window when trying to link all Trump voters to the actions of the few who broke into the Capitol building.

Black Lives Matter supporter Billy Eichner epitomized this double standard. He destroyed his whole industry’s narrative on peaceful protests when he tweeted out an angry message blaming Trump voters for what happened that fateful Wednesday.

In a video message from January 6, The Lion King actor stated, “You know who I blame for what happened today? For all the disturbing shit that we’re seeing today? … Over 74 million people ... voted for Trump eight weeks ago. They voted for four more years of THIS.” Eichner made even more of a mockery of himself and the left by ridiculing an idea that he and fellow lefties have endorsed as well. He added, “A lot of those people think that they can separate themselves, their vote from what happened today … No you can’t do that.”

That’s rich. The left’s main defense for BLM last year was that people in peaceful marches were distinct from looters, murderers and rioters. But now Trump voters are to blame for the actions of a depraved few? Only last year was Eichner praising thousands of people at BLM rallies. If he were consistent, he’d say “A lot of these people think they can separate themselves - their rally attendance from what happened in Kenosha, (or Minneapolis?)” Surely if Trump voters were blamed for the riots, then even the peaceful BLM marchers would have more skin in the riot game if the roles were reversed.

Make no mistake, the Capitol riots on January 6 were shocking and terrible events that should be condemned by every American. But the left’s use of the event to demonize Trump and his supporters after their friendly and supportive treatment of falsehoods and protests which prompted terrible riots less than a year ago, show their wicked and power hungry intentions. One would be a fool to consult their moral judgments ever again.