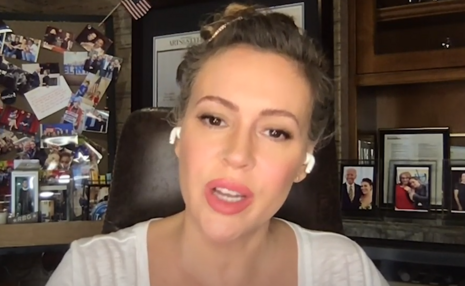 Hey, Arizona could flip red and Pennsylvania could go for Trump still -- all the while Wisconsin's within recount margins, but again, take it from Alyssa Milano and her famous friends. So far they’re on record, claiming, “we are winning this!”

Hey they could be right. Just like they were when Hillary won in 2016.

John Cusack, High Fidelity star and atavistic Bernie Bro, called it for Biden as soon as last night, so he said. The actor tweeted, “I knew last night - trump was dead - i was depressed it was close - but not in doubt biden gets to 270.” Sure, of course not. After all, Cusack can tell which color is which on the electoral map and knows that Joe Biden’s number being higher than Trump’s equals winning.

He also touted his exclusive “sources” in an earlier post, tweeting, “My sources are the pros on ground - Trumps dead. He just gets to pretend he ain’t for a little while longer - rember [sic] pandemic vote means early vote counted last.”

Charmed actress and Hollywood Biden cheerleader Alyssa Milano projected confidence instead of her usual teary-eyed complaints. “We. Are. Winning. That’s all. That’s the tweet,” she declared. OK, if she says so.

Elated, the actress exclaimed, “Who hoo! When they #CountEveryVote #Biden will be PRESIDENT!! Thank you poll workers for your tireless work!”

Roseanne’s ex-husband and actor Tom Arnold tweeted a video of himself assessing the outcome of election night, claiming, “All is well. We’re winning.” Arnold then added that the evening was going all as lefties predicted: “What a night! But of course we knew that was going to happen.”

Interesting. Tom must have been one of those rare Hollywood lefties who didn’t think Biden would have a landslide victory.