The Farce is Strong With This One: Mark Hamill To Moderate Virtual Biden Fundraiser 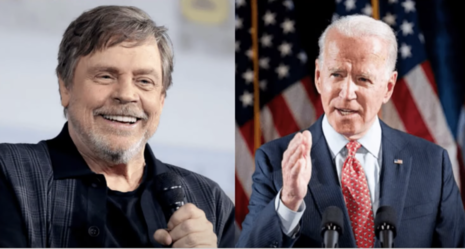 In between all the chaos and unrest in the streets and the virus from China preoccupying Americans’ brains, it might be easy to forget about Hidin’ Joe Biden and just how terrible a candidate he is. But not for Luke Skywalker actor Mark Hamill, who is reportedly hosting a virtual fundraiser for the 77-year-old gaffe machine.

Like some Star Wars character said one time, “Rebellions are built on hope.” Well if your hopes rest on Biden for saving the country, especially when the evil Chinese Communist empire shows up, you might be screwed.

Hollywood outlet Deadline reported that the Star Wars actor will headline a virtual town hall of sorts to generate money for the Joe Biden Victory Fund. The event is described by the Victory Fund website as a “Virtual Conversation about Hope & Democracy” that will be held on Tuesday June 30. It will be the “latest in a series of events the campaign has on its slate in an effort to raise huge sums before the fall campaign.”

Though we don’t know how entertaining or riveting a virtual event with Joe Biden could ever be, tickets for this simulated gathering are still pretty pricey. Deadline added that tickets will start at “$500 per person” and rise to “$100,000 for those who want to be listed as co-chairs.” Funds will go to the Biden Campaign, the Democratic National Committee and state Democrat parties.

Of course, Hamill’s appearance is probably the main draw here. Someone needs to inject some life into Sleepy Joe’s movement, so why not the actor behind the biggest hero in American pop culture history.

In between Trump-hating posts, a giddy Hamill posted tweets announcing the event. In the first one, Hamill made a cutesy reference to one of Princess Leia’s most famous lines, writing, “Help us Joe-bi Wan, you're our only hope! #PleaseJoinUs.”

In another cringeworthy tweet, the actor shared an edited photo of pilot Luke Skywalker during the death star trench run, but his face was replaced with that of the former Vice President. Hamill’s caption read, “#Red46StandingBy,” a hashtag referencing Skywalker’s famous Episode IV line, “Red 5 standing by.”

So Joe Biden can’t even string a sentence together but somehow we are supposed to envision him as the sci-fi hero who shot the “one in a million” bulls eye that killed the Empire’s superweapon. Yeah, sure.

The 2020 presidential candidate will also have other virtual events with Hollywood talent. On June 29, Biden will join Sen. Tammy Duckworth (D-IL) and Wonder Woman actress Lynda Carter for a virtual reception “to mark the 30th anniversary of the Americans With Disabilities Act.” Last week too, the candidate held yet another virtual soiree with famous folks like Jennifer Hudson, Barbara Streisand, John Legend, Jay Leno, and Andra Day.

For the month of May alone, the Biden Victory Fund has raised just over $80 million dollars and he plans on upping the cash with an upcoming grassroots event featuring none other than the previous president himself, Barack Obama.

Well, it’s going to take every lefty force user in the galaxy to get Joe Biden’s starship off the ground, that’s for sure.