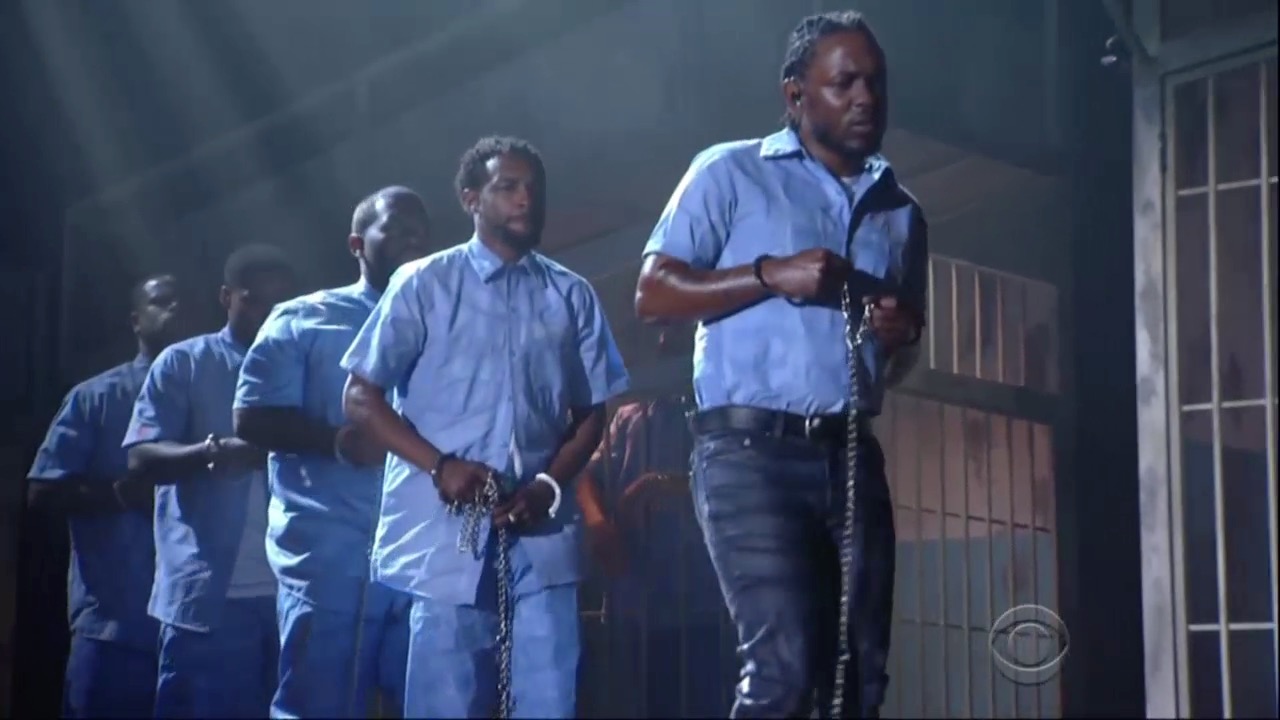 The 58th Annual Grammy Awards had many moments to celebrate. Whether it was Gary Sinise honoring veterans or great tributes to many legends we have lost this year: BB King, Bowie, Glenn Frey, and others. Compared to years past it was a pretty tame event. But it just wouldn't be the Grammys without someone making a political statement.

This year the award for biggest political statement goes to... Kendrick Lamar for showing up on stage with several other African Americans in chains and prison garb. The backdrop even included prisoners playing instruments in their cells. Apparently since Beyonce wasn't performing (only slurring her way through presenting Record of the Year), Kendrick felt compelled to carry the torch for the Black Lives Matter crowd in his performance of the song "The Blacker the Berry."

♪ I'm the biggest hypocrite of 2015 ♪ I'm the biggest hypocrite of 2015 ♪ once I finish this witnesses will convey just what I mean ♪ been feeling this way since I was 16 came to my senses ♪ you never liked us anyway, your --- friendship I meant it ♪ I'm African-American I'm African ♪ I'm black as the moon ♪ heritage of a small village, pardon my residence, came from the bottom of mankind ♪ my hair is nappy you know that it's big my nose is round and wide ♪ you hate me don't you?

You hate my people ♪ your plan is to terminate my culture ♪ you know you're evil I want you to recognize that I'm a proud monkey ♪ you vandalize my perception but can't take style from me ♪ and this is more than confession ♪ I mean I might press the button so you know my discretion ♪ I'm guardin' my feelings I know that you feel it ♪ you sabotage my community makin' a killin' ♪ you made me a killer emancipation of a real... As we procees to give you what you need, everybody get stuck.

The sad truth is that prisons are full of minorities. Most of them have no father figure to look up to so they look to athletes and rappers. But since most athletes and rappers live in rich, white neighborhoods these poor minorities turn to gangs and drugs instead. Minorities don't fill the prisons by accident or because of racism.

Shoutout to @KendrickLamar and all the artists at the #Grammys working to build a brighter future. #MyBrothersKeeper https://t.co/XM0KwV3jNB

There are no easy solutions, but “singing” songs and calling others evil, haters, and saboteurs is NOT part of the solution. The solution begins with owning up to your responsibilities as role models. How about singing songs calling men to own their responsibility for their families instead of treating women like sex objects and children as a mistake? If you want the world to believe that Black Lives Matter perhaps you should show the world they matter to you first.