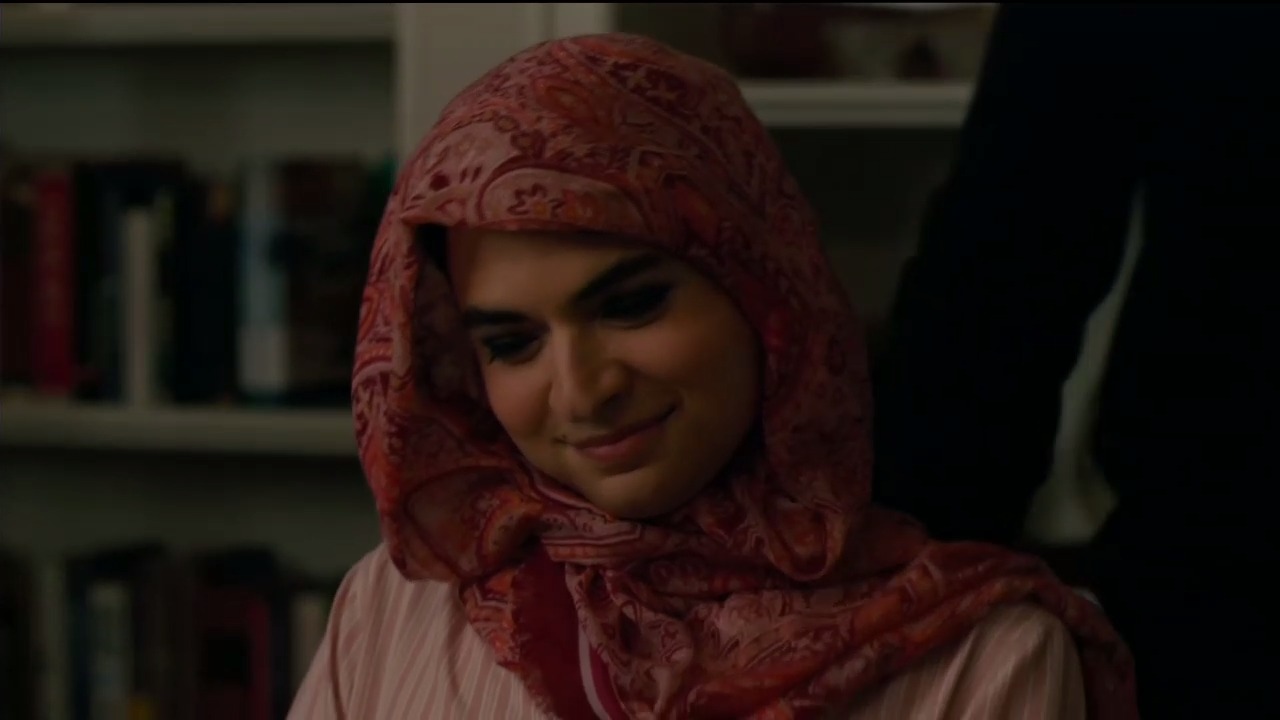 HBO's Here and Now continues to try to set the gold standard for being the most obnoxiously woke show on television. In its premiere last week, we met the main family, the Bayer-Boatwrights, who are made up of an academic, some kind of a counselor (we will see more in this week's episode), and their children adopted from around the world in a show of how "progressive and evolved they are."

In the February 18 episode "It's Coming," we get to know Farid Shakrani (Peter Macdissi), one son's therapist. He's a Muslim with a son, Navid, of questionable gender identity (pictured in a hijab in the screenshot) and a wife, Layla, who loves her hijab, but he thinks America is a pretty terrible place.

Farid: So... Navid's gonna go through life being trans and Muslim.
Layla: I don't think he's trans. I think he's more fluid... gender neutral, or... is it gender queer?
Farid: Yeah, however you wanna frame it, it just ups his chances of getting the shit kicked out of him... or worse.
Layla: He agreed to never go out like that.
Farid: Yeah, I really hope so, 'cause he's a big target. And so are you, insisting on wearing the hijab every time you go out.
Layla: That is my faith. I know women are forced to wear the veil in certain places, but in the West, we are pressured not to. Everybody-- including my husband, apparently-- wants us to be invisible.
Farid: I just don't want you to be the victim of a hate crime.
Layla: We live in Portland.
Farid: Remember what happened on the MAX last year during Ramadan? We live in America.

Yes, you live in America. Does Farid think most Muslim countries would be friendly to a young man who is gender queer or whatever other phrase he and his wife would like to use? They wouldn't. While his wife points out that they live in Portland, implying that it is a progressive utopia, which many seem to think it is, Farid does my research for me by pointing out that hate crimes do happen there.

The crime the show chooses to point out is one in which a white man attacked two people trying to protect a Muslim woman during Ramadan, but the FBI thwarted a terrorist attack in Portland in 2010 and there have been high-profile crimes that had nothing to do with ideology, some of which have been committed by illegal immigrants in the "sanctuary city." Then again, "white guys are bad" was a theme in this week's episode.

At the youngest Bayer-Boatright's high school, the straight white kids are a little upset that every other group of students gets to be proud of who they are, but they're supposed to feel guilty about it. So, they decide to start a club celebrating their heritage like other ethnic groups do. Of course, this goes over horribly, so family matriarch Audrey Bayer (Holly Hunter) is called into the school to facilitate a dialogue between the groups of students. It is one of the most ridiculous things I have ever seen on television. The students opposed to the group call the other students Nazis and fascists, which is to be expected, but then this magical dialogue occurs:

This reminds me of those corporate training videos wherein everyone says the exact right things for the situation and it in no way models real life. If these students wanted to stir things up enough to make their point by starting a straight white people club, they weren't going to quit because they had a 30-second respectful dialogue.

The youngest Bayer-Boatright, Kristen (Sosie Bacon), had another important social justice role to play. Remember last week when she lost her virginity to a complete stranger while wearing a horse's head mask? Well, she has Chlamydia now and she goes to Planned Parenthood. Of course, she's virtually attacked by pro-life protestors outside who shout at her like crazy people - including this man who is holding a baby doll nailed to a cross as they walk out and Kristen bemoans her condition:

Kristen: Yeah, but I am the most disgusting slut alive.
Ashley: Oh, stop, there are plenty of sluts way more disgusting.
Kristen: No, I'm just ashamed.
Man: Of course you are. How many babies you kill today?
Kristen: Thirty!
Man: You think this is a joke? They butcher it while it's still inside you, and then they suck the dead baby out, and they sell it for parts!
Ashley: That's been completely debunked.
Man: Oh yeah? Well, I guess then black lives really don't matter.
Kristen: Hey, fuck you, you fucking ass.
Ashley: Kristen! Get in the car. Get in the car.
Man: Yeah, Kristen. Dumb whore! Hey!

When the man points out that Planned Parenthood dismembers babies in the womb and sells off the parts, Kristen's adopted sister Ashley (Jerrika Hinton) says that that has been "completely debunked." Um, that's not true, no matter how much the mainstream media tries to cover it up. When the man comes back at Ashley, who is black, with "I guess black lives really don't matter," she doesn't have much to say. Maybe she knows that more than 15 million black babies have been lost to abortion since Roe v Wade. Nearly 10,000 per day. In New York City, more black babies are aborted than born. Maybe Ashley knows all of this and that's why she remains quiet. Kristen, on the other hand, goes after the guy and starts physically attacking him. Both women are arrested. Kristen is treated like a queen in jail and Ashley is treated like, well, a criminal. We are led to believe it's because Kristen is white.

Since Here and Now is basically farce, the man who was beaten up outside of Planned Parenthood isn't going to press charges. Care to guess why? Because he's a sex offender and the clinic was near a school, so he wasn't allowed to be there anyway.

When Kristen comes home and tells her mother that she was arrested for beating up a man outside of a Planned Parenthood, we get another conversation that could occur on no planet but this show.

Audrey: It's okay, sweetie. Your father and I have both been arrested.
Kristen: Okay. I kicked some Jesus freak who called me a whore at Planned Parenthood. But don't worry. He's not pressing charges.
Audrey: What were you doing at Planned Parenthood? Are you pregnant?
Kristen: No. I had my period like a week before I had sex.
Audrey: You had sex?
Kristen: Oh my God.
Audrey: With who?
Kristen: It doesn't matter.
Audrey: Did he give you an STD?
Kristen: Oh my God. Okay. I have Chlamydia.
Audrey: Oh. Sweetie, I'm so sorry. That truly sucks.

This 17 year-old just got arrested for beating a man up outside of a Planned Parenthood where she was being treated for the Chlamydia she got from losing her virginity to a stranger and her mom's reaction is "that truly sucks?" What kind of parenting goes on in this show? None, obviously.

Oh, that's right, we haven't checked in yet with Kristen's dad, Greg Boatwright (Tim Robbins). Still in the midst of his mid-life crisis, he kicks his philosophy students out of the classroom with instructions to, amongst other things "punch a Nazi." Maybe that's where Kristen gets her aggression.

If I had not just watched this show with my own eyes, I wouldn't believe that it actually existed. Having seen it, I can barely believe it isn't supposed to be a farce. How can this show possibly take itself seriously?