When it came to covering voters’ most important issue, networks fumbled again in August. Instead, the networks spent more time tackling a football player who protested the national anthem.

Voters and presidential candidates were focused on the economy. According to Gallup, voters ranked the economy as their top concern at the beginning of August. Republican nominee Donald Trump and Democratic nominee Hillary Clinton both laid out their respective economic plans in August speeches.

The current economic situation got less time in an entire month than the uproar over a football player’s pre-season protest. Cheerleaders in the media heralded San Francisco 49ers backup quarterback Colin Kaepernick for “taking a stand” after he remained seated during the national anthem at a pre-season game.

During a three-day period in August, ABC, CBS and NBC evening news programs covered the “firestorm” surrounding “huge star” Kaepernick. In just that short time, the media covered his “stand,” its “powerful symbolism” and the ensuing controversy for two minutes more (529 seconds) than the economy in the entire month of August (387 seconds).

Nightly News was very supportive of Kaepernick on Aug. 29, when the network ran with his social justice activism and included multiple supporters of his protest, but failed to include a single critic in person — choosing only to show critical tweets onscreen.

Correspondent Jo Ling Kent reinforced Kaepernick’s image by saying the quarterback was “sticking to his playbook, standing he says on principle.”

Like many other media outlets, ABC’s World News Tonight huddled around Kaepernick’s social justice stunt, but took a knee when it came to covering the economy. 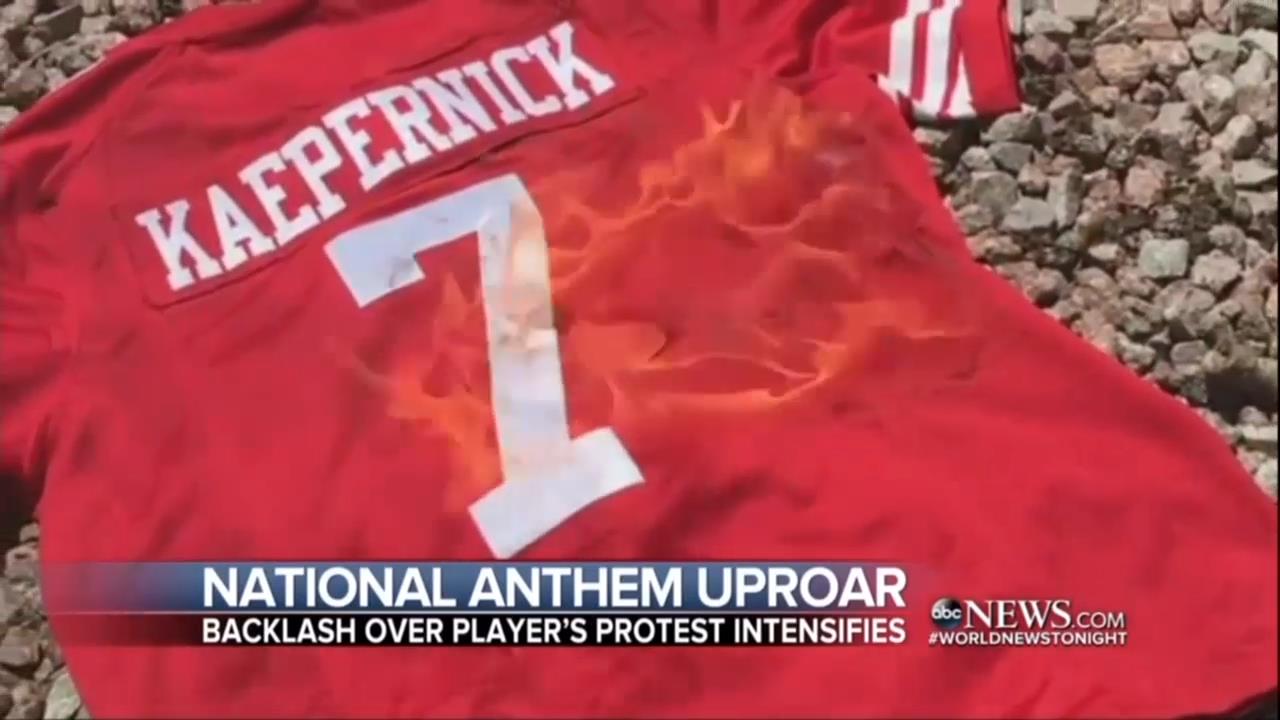 In both of ABC’s Aug. 28, and Aug. 29 reports, World News Tonight showed a clip of Kaepernick’s jersey burning to the tune of the national anthem.

Anchor Tom Llamas did mention the July jobs report during on Aug. 5, calling it “Good news for the economy.”

What Llamas didn’t mention was that more than 94 million Americans weren’t in the labor force. Only 62.8 percent of people either working or actively seeking work were in the workforce, according to BLS data.

Llamas reported that economists saw the added jobs creating a “rebound in the second half of the year.” During the entire month of August, ABC ignored the economy’s poor growth rate (GDP).

Reuters reported on Aug. 26, that the Commerce Department revised downward the already disappointing estimate of second quarter GDP. Previously the agency said the U.S. was growing at a 1.2 percent rate. Taking the revision into account, it grew at what USA Today called a “feeble” 1.1 percent rate.

Methodology: MRC Business used Nexis and video archives to search  ABC, CBS and NBC evening news shows from Aug. 1, through Aug. 31, and tracked time given to stories about the state of the economy or economic issues. MRC Business also counted the number of seconds networks spent reporting on Colin Kaepernick sitting during the national anthem.