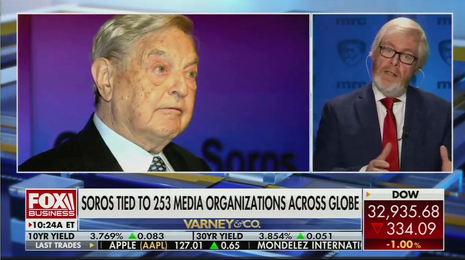 Bozell presented the findings of MRC Business’ second report in a three-part series exposing Soros’ global media ties. The first report revealed 253 organizations tied to news and activist media around the globe that help to amplify Soros’ radical messaging on issues including abortion, Marxist economics, anti-Americanism, defunding the police, environmental extremism and LGBT fanaticism. The second report exposes how much money these organizations collectively received from Soros. Soros funneled a whopping “$131 million since between 2016 and 2020” into the global media, Bozell revealed on the Jan. 5 edition of Fox Business’ Varney & Co.

One-hundred and thirty-one million dollars is “far more than any entity, any foundation, anyone else probably in the world investing in [media],” Bozell noted. “This is a man who wants to fundamentally change the world.” Bozell also rebuked the media, remarking that it’s the “tip of the spear for the left and it's George Soros who’s funding it.”

One of the Soros-funded global outlets Bozell slammed, openDemocracy — which received $1,633,457 from Soros between 2016-2020 — justified Palestinian terrorist rockets fired into Israel as “a necessary counter-discourse” to what it dubbed a “colonial power.” The outlet decried in its anti-Israel screed:

The Israeli Jewish public must understand that there shall be no security so long as they do not turn their anger and frustration at their very supremacist privilege and ideological system which is embodied in the Israeli government, left-wing, centrist, or right-wing.

Project Syndicate, another Soros-funded outlet with global reach, published propaganda by former Iranian president and anti-American extremist Hassan Rouhani. Rouhani threatened further conflict with the U.S. in his 2014 column for Project Syndicate if an agreement on his country’s nuclear program wasn’t reached.

This is the kind of insane media content Soros’ money funds.

Bozell told Varney that this dynamic provided the “rubric” for Twitter’s notorious attempts to squash the Hunter Biden laptop scandal and anyone who shared the story.