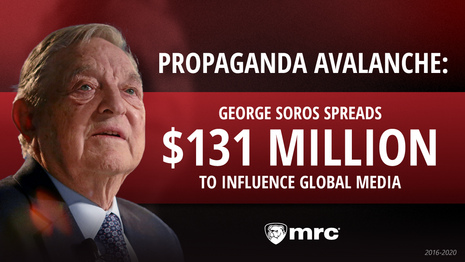 A new MRC Business analysis revealed that Soros specifically funneled at least $131,111,250  between 2016 and 2020 into 253 journalism and activist media groups worldwide to spread his radical leftist ideas on abortion, Marxist economics, anti-Americanism, defunding the police, environmental extremism and LGBT fanaticism. Soros pumped a whopping $103,236,632 into media groups that circulated his extreme views throughout the U.S. and abroad between 2000 and 2014. Fast forward to the period between 2016-2020, and Soros blew past the $100 million global media funding milestone again in just a four-year timespan.

This report is the second in a three-part series that reveals the extent of Soros’ influence over the international media to inundate the world with his radical leftist ideas. It is easy to criticize Soros’ politics. But he is a savvy investor —whether he’s trying to make money or use it to push his agenda. Soros once told The New York Times that he was working to “bend” the arc of history “in the right direction,” and he’s using his global media clout to do it.

Soros Report Part 3: MRC Business will expose who in the establishment media have deep ties to George Soros.