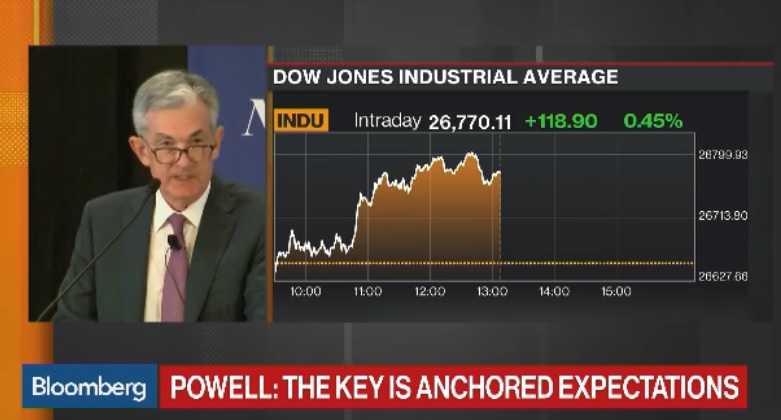 Federal Reserve chairman Jerome Powell expressed optimism about the “extraordinary times” for the U.S. economy right now at an event with business economists on Oct. 2.

Powell said, “The economy is strong, unemployment is near 50-year lows, and inflation is roughly at our 2 percent objective, and the baseline outlook of many forecasters in and outside the Fed is for more of the same.”

“This historically rare pairing of steady, low inflation and very low unemployment is a testament to the fact that we remain in extraordinary times,” he continued.

However, his positive views about the state of the economy did not make it into the ABC, CBS and NBC evening news programs that night. The networks’ silence contrasted with online and print publications that considered it important news.

Powell argued that although it was fair to ask if the situation is “too good to be true,” the Fed didn’t see signs of an “overheating labor market” and he called the recent rise in wages “quite welcome.” He also defended Fed plans to continue to gradually raise interest rates.

The Washington Post also covered Powell’s remarks, although it took a more downbeat approach than some news outlets. The headline, read “This is almost the ‘too good to be true’ economy, Fed chair says.”

The Post also cited a recent survey of 51 NABE economic forecasters that found more than half anticipating the start of a recession in 2020.

Powell’s Oct. 2 speech was at the NABE’s annual meeting in Boston.

That night, when the networks ignored Powell’s economic views, CBS Evening News found time to cover a group of veterans turned eco-warriors, working to repair hurricane-damaged coral reefs, and NBC Nightly News reported on a the female surfer who just became the Guinness World Record holder for highest wave surfed by a woman.