There’s nothing that screams potential conflict of interest like a major newspaper’s owner getting millions in subsidies from the federal government it's supposed to be objectively covering. 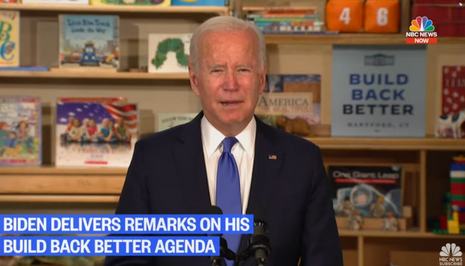 The New York Times reported that part of President Joe Biden’s “Build Back Better” (BBB) catastrophe includes funneling nearly $1.7 billion into local news outlets. Guess what? One of the recipients listed in The Times report was none other than Gannett, the publishing company that owns liberal newspaper USA Today.

The Times said that Gannett, “the largest newspaper chain in the country, could receive $37.5 million the first year and tens of millions after that.”

The relief would come “in the form of a payroll tax credit earmarked for local news organizations, a small part of the Build Back Better bill that the House passed on Nov. 19,” according to The Times.

No wonder USA Today appeared to run a bunch of public relations for BBB. It ran a puff story on the bill Nov. 16 with a glowing headline, “Biden's Build Back Better bill would give young people jobs to fight climate change. What would a new CCC look like?” [Emphasis added.]

Conflict of interest much?

USA Today ran another pro-BBB slobber fest of a news item Nov. 19 headlined, “What's in the House-passed Build Back Better bill? Paid leave, universal pre-K and more.” It makes sense for a newspaper to run such pro-Biden propaganda if doing so proves lucrative for the company that owns it. The Times noted that Gannett currently “publishes roughly 250 local newspapers, including The Arizona Republic, The Detroit Free Press, and The Milwaukee Journal Sentinel,” in addition to USA Today.

Gannett Media President of News Maribel Perez Wadsworth had the audacity to attempt to justify the apparent conflict of interest of her company receiving millions from BBB to The Times:

‘Scale allows us to solve for some things ... but at the end of the day they’re local newsrooms with local reporters and photographers and editors, up against the same headwinds.’

The Wall Street Journal Editorial Board emphasized the danger of the federal government’s scheme to fund journalism, which compromises the purpose of a free press:

A federal subsidy would do more harm than good. Subsidies from Washington conflict with the democratic mission [Sen. Ron] Wyden [D-OR] describes, which requires an independent press. Local papers in the mold of left-leaning National Public Radio stations wouldn’t serve a politically diverse public. Most Americans already mistrust the press, and making journalists more dependent on government will compound the suspicion of bias.

The idea of maintaining a free press seems to be lost on Gannett.

Conservatives are under attack. Contact Gannett headquarters at (703) 854-6000 and demand the company reject federal funding for its journalism outlets.