CNN’s cable shows have salivated at least seven times over climate activist James Murdoch’s virtue-signaling against Fox News in the past year, all while ignoring any mention of an atrocious media scandal that nearly nuked his career. 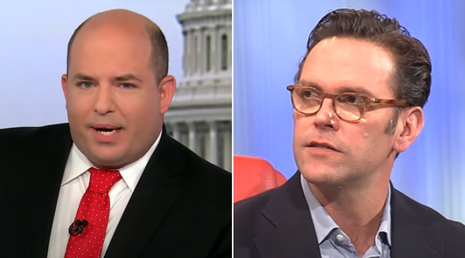 News blew up in 2011 on how the now-defunct U.K. newspaper News of the World was set to publish its last issue following a massive phone-hacking scandal that occurred in the mid-2000s, which ultimately led to its demise. News Corporation Executive Chairman Rupert Murdoch’s estranged son James was executive chairman for News International — then-parent company of News of the World — at the time. James Murdoch would later resign. The newspaper “presided over a large-scale policy of hacking cell phones and computers belonging to celebrities, politicians, and private citizens,” according to the Carnegie Council for Ethics in International Affairs. The scandal even involved hacking the communications of Prince Harry.

The pundit at CNN doing most of the pro-James Murdoch fanboying has been none other than CNN Chief Media Correspondent Brian Stelter, because James Murdoch bashed Fox News.

During a Jan. 16 segment of CNN’s New Day, Stelter fawned how Murdoch was “disappointed by the conservative disinformation coming from Fox News” regarding the shady 2020 election.  In Stelter’s words, Murdoch “could not take it anymore.” Stelter continued his slobbering over how Murdoch panned “media property owners” as having “just as much responsibility as elected officials who know the truth but choose to propagate lies.” He then tried to use Murdoch’s pontificating to attach the Capitol Hill riot to Fox News: “[Murdoch] is aiming straight at Fox News, aiming straight at his father and his brother Lachlan, who run Fox News, because we have to acknowledge that what happened in Washington ten days ago, it was a riot of lies.”

But Stelter never mentioned the phone-hacking scandal that Murdoch’s media company under his leadership tried to cover up in this segment, because it effectively blows apart Murdoch’s credibility as a media critic. The Guardian reported in 2017: “James Murdoch’s career appeared to be on the line in 2012 when Ofcom, the media watchdog, concluded he ‘repeatedly fell short of the conduct to be expected of him as a chief executive officer and chairman.’”

Over at Stelter’s own ratings disaster of a show Reliable Sources on Jan. 17, NPR Media Correspondent David Folkenflik fawned how Murdoch was “offering, in some ways, to the public, an alternative view of what a Murdoch future could look like.” It’s ironic for Folkenflik to issue a glowing statement about Murdoch presenting an alternative “future” without mentioning his scandal-ridden past. Stelter repeated Murdoch’s veiled repudiation of Fox News and pitted him against his father like Luke Skywalker against Darth Vader in his leading question to Folkenflik: “You wrote a book about the Murdochs, David. Is this a message from — from son to father?”

During another bash-Fox-News rant on the March 5 edition of CNN Newsroom with Brianna Keilar, Stelter praised the other “Murdoch son, James Murdoch. He's on the outside. He's much more liberal. He is disgusted by the Tucker Carlsons of the world.” Of course, Stelter didn’t say anything about Murdoch’s past failures as a media executive during this segment either.

But Stelter wasn’t finished cheerleading. He laid the pro-Murdoch lauding on thick during another segment of Reliable Sources on June 13 with CNN senior media reporter Oliver Darcy. Stelter slobbered over reports that Murdoch had spent $100 million largely toward helping left-wing causes. He also donated to President Joe Biden’s 2020 campaign. “Oliver, it's impossible to hear this and not hear the music from ‘Succession,’ the idea that the liberal son trying to undermine the conservative brother and the conservative father,” Stelter squealed. Darcy chimed in afterwards with his own thrill-up-the-leg-for-Murdoch moment: “That’s what’s even the most remarkable part about it, right? He's using the Fox money to undo, or at least try to undo, uh, some of what Fox has put into place, which is astounding.” Again, viewers watching the show would never know that Murdoch was once the face of a major media scandal because Stelter never bothered to bring it up in this segment either.

It’s not as if Stelter was completely unaware of the scandal. In fact, Stelter did an entire 2012 segment on CNN when he worked at The New York Times reporting on how “James Murdoch has been the most closely tied to the phone-hacking scandal in Britain.” He even said Murdoch was “wrapped up in it.” Fast forward nine years and now Stelter is whipping out the pro-James Murdoch pom-poms while he mindwipes the scandal.

The scandal was that “journalists, or their hired investigators, took advantage of often limited security on mobile phone voicemail boxes to listen in to messages left for celebrities, politicians or people involved in major stories,” according to RTE. The scandal was so bad that Carnegie noted “‘Hackgate'” as “an endemic media problem, symptomatic of the UK tabloid media's uniquely competitive market and unscrupulous practices.”

Reporting by The Guardian showed that News International under Murdoch’s leadership “denied again and again that phone-hacking was more widespread than the activities of a ‘single rogue’ reporter.”  CNN behaved like this scandal wasn’t that big enough to avoid painting Murdoch as some kind of paragon of media responsibility.

Conservatives are under attack. Contact CNN at 1-(404)-827-1500 and demand the outlet stop its biased reporting, promoting James Murdoch’s anti-Fox News crusade without noting the News of the World phone-hacking scandal.