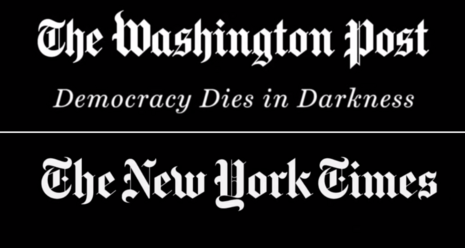 The leftist organization behind the statement that pretends to “stand for democracy” — Black Economic Alliance (BEA) — cheered how “over 500 companies and CEOs have united to oppose the 360+ state bills pending in 47 states that contain discriminatory voting measures.” The BEA, along with several other business figures, paid for the statement’s ad expenses. Signatories included liberal companies and Big Tech bigwigs like Facebook, Amazon, Twitter, Reddit, liberal billionaire Michael Bloomberg, Star Wars: The Rise of Skywalker director J.J. Abrams, liberal billionaire Warren Buffett, notorious LinkedIn co-founder Reid Hoffman and Google’s parent company Alphabet. The leftist statement was plastered as a big advertisement in both The Times and The Post.

The BEA said in its summary of the statement that “we boldly declare enough is enough. The business community has made its position clear: it is willing and ready to unite in the fight to protect our democracy.” The statement misleadingly claimed that the effort was “nonpartisan.” But the BEA’s involvement with the statement showed that it is the furthest thing from “nonpartisan.” In 2020, the BEA exploited the deaths of George Floyd, Breonna Taylor and Ahmaud Arbery to spew that America was structurally and institutionally racist:

This confluence of bad outcomes for [b]lack people is not a coincidence. It’s simply the latest manifestation of the structural, institutional, and individual racism that still exists in America. These recent incidents are not isolated, nor are they unrelated in the arc of American history. They are part of the legacy of historic and ongoing systems of racial injustice that impact every aspect of American life.

But that’s not all. BEA’s affiliated entities also revealed an extreme left-wing bias. Records showed that BEA’s political action committee, Black Economic Alliance PAC, donated tens of thousands of dollars exclusively to Democrats for both the 2018 (approx. $97,140) and the 2020 ($60,000) electoral cycles, according to OpenSecrets.org. Political recipients of BEA PAC money in the 2020 cycle included left-wing radicals like Sen. Raphael Warnock (D-GA) and Sen. Jon Ossoff (D-GA). The PAC even released a statement celebrating Warnock and Ossoff’s electoral victories in January.

If that wasn’t revealing enough, Foundation Directory Online (FDO) data revealed that BEA’s foundation, the Black Economic Alliance Foundation, was funded with $1,500,000 by the radical left-wing Ford Foundation in 2020. Influence Watch described the Ford Foundation as “a major force in American culture.” It continued: “[B]ecause of [the Ford Foundation’s] size, [it] has given a great deal of money to left-wing and center-left organizations since its founding.”  FDO data listed no other funder for the BEA Foundation.

Conservatives are under attack. Contact The Washington Post at 202-334-6000 and The New York Times at 800-698-4637 and demand they stop peddling efforts to block states’ voter ID laws.