While ABC’s, CBS’s, and NBC’s evening news shows were busy hawking psychologist Mary Trump’s anti-Trump book July 7, they ignored a glaring bias. Mary Trump had been a Democrat donor for years, donating to the party, Hillary Clinton and Barack Obama. 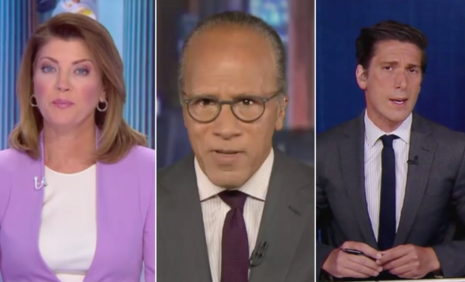 Federal Election Commission Records revealed that to-date Mary Trump had given $302.90 to Clinton’s principal campaign committee Hillary for America. She also gave $2,300 to then-candidate Obama’s principal campaign committee Obama for America in 2008, and $500 to the same committee again in 2012. In 2004, Mary Trump gave $2,000 to the DNC Services Corporation/Democratic National Committee (DNC).

She had also donated a flurry of small-dollar contributions in 2012 to the online Democratic GoFundMe ActBlue. The contributions were earmarked for Democratic candidates like Sen. Elizabeth Warren (D-MA) and Sen. Chris Murphy (D-CT).

Had a responsible unbiased media reported this information, it would have made Mary Trump look as she is — extremely biased concerning her wild claims about her uncle in her book “Too Much and Never Enough: How My Family Created the World’s Most Dangerous Man.”

World News Tonight anchor David Muir peddled the book as “explosive,” before handing the reins to ABC News Chief White House Correspondent Jonathan Karl. Karl touted how “Mary Trump describes the president’s father — Fred Trump — as a high-functioning sociopath, who short-circuited Donald’s ability to develop and experience the entire spectrum of human emotion.” There was no disclosure of Mary Trump’s past campaign donations to Democrats.

Nightly News anchor Lester Holt began the network’s segment on Mary Trump’s book by saying it was filled with “shocking claims.” He then turned to NBC News National Correspondent Peter Alexander, who pushed how Mary Trump “had to take Donald down.” Alexander pushed a propagandized quote from Mary Trump’s book: “If he is afforded a second term, it would be the end of American Democracy.” Also, Alexander said Mary Trump insisted “her uncle meets all the criteria of a narcissist.”

Alexander did not disclose Mary Trump’s past support for Democrats.

Mary Trump’s publisher Simon & Schuster was reached for comment with a close of business deadline July 16, 2020. The organization provided no response as of the publication of this article.