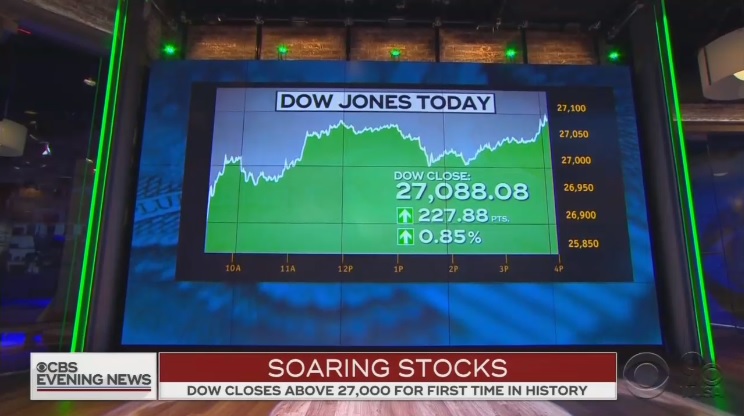 Wall Street experienced another record-setting day July 11, as the Dow Jones Industrial Average closed above 27,000 for the first time ever.

But you would know little about that new record if you were watching the three broadcast evening news shows that night. And nothing at all if you watched NBC Nightly News.

Anchor Lester Holt offered exactly zero coverage about the market record on Nightly News. That’s right, zero. NBC did prioritize coverage of an alligator discovered swimming in a Chicago lagoon. It hyped the “rock star reptile” and Chicago’s “alligator mania” with 1 minute and 9 seconds of coverage.

Even combined, that wasn’t half of a minute.

Instead of giving the Dow’s new milestone additional time or putting it in context for viewers, ABC opted to spend more time about Amazon’s new Prime Day deals and other major retailers competing to win consumers with their discounts.

According to Fox Business, “surging health care stocks” and investors’ rising hopes for rate cuts from the Federal Reserve boosted the Dow to its latest record-high close on July 11.

The broadcast evening news programs’ tendency to downplay reports on the Dow’s record highs and to exaggerate drops since Trump’s election is nothing new. Between Jan. 1, 2017, and Jan. 26, 2018, they ignored new Dow record closes 75 percent of the time.