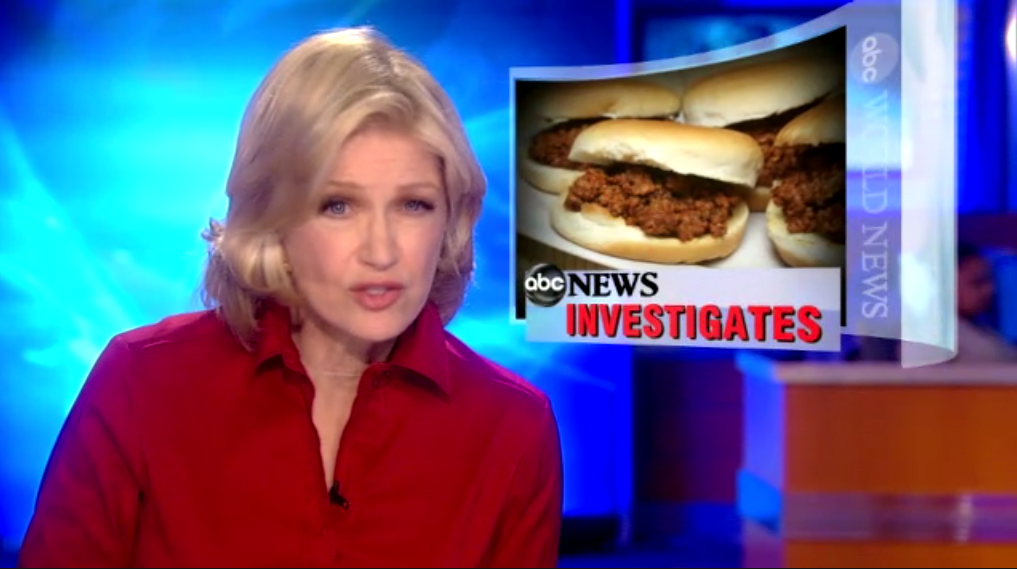 The broadcast networks have refused to cover the conclusion of a massive defamation case involving one of their own.

ABC News and Beef Products Inc (BPI) reached a confidential settlement which concluded a 5-year-old lawsuit as of June 27. BPI filed a $1.9 billion lawsuit against ABC News in 2012 for reports that the company’s lean finely textured beef (LFTB) as dangerous “pink slime.” ABC may have been liable for up to $5.7 billion if it lost the case because of South Dakota’s Agricultural Food products Disparagement Act.

ABC, CBS and NBC morning and evening news shows never mentioned the conclusion of the lawsuit between June 27 and July 5. None of the broadcast network websites reported on the story either. ABCNews.com and CBSNews.com merely ran the AP’s report. NBC published nothing. The broadcast networks also ignored the case when it first went before the jury on June 5, 2017.

They missed a lot. BPI went from receiving the Black Pearl food safety award to being attacked the media following ABC’s 2012 coverage. The beef company accused ABC News of making more than 200 “false and misleading and defamatory” statements about LFTB between March and April 2012. ABC used the term “pink slime” more than 350 times in 131 communications about the beef on various platforms including broadcast news shows, Facebook and Twitter. As a result, BPI lost 700 employees and had to close three of its four locations.

ABC News ran a series of broadcasts in early 2012 disparaging LFTB as unfit for human consumption. As a result, BPI was forced to close three of its four locations and lay off 700 employees in a single month.

ABC News Senior National Correspondent Jim Avila and then-World News anchor Diane Sawyer launched an attack against LFTB starting March 7, 2012. “Beef trimmings that were once used only in dog food and cooking oil [are] now sprayed with ammonia to make them safe to eat then added to most ground beef as a cheaper filler,” Avila fumed.

The story was followed by at least 130 other ABC reports and social media posts which further maligned the beef product.

ABC News initially labeled their FLTB coverage, “PINK SLIME MEAT IN SCHOOL LUNCHES -- WHAT IS REALLY IN THERE & IS IT SAFE?” court documents showed. A later version said “PINK SLIME MEAT INVESTIGATION -- DO YOU KNOW WHAT’S IN YOUR FOOD?”

A judge denied ABC’s request to throw out BPI’s defamation because of the initial title. The wording implied “ABC was pursuing a negative spin on its story from the beginning before any research was done and then took steps in its investigation only to hear and report what fit within that negative image,” The Hollywood Reporter revealed.

Prior to the first ABC report, Avila reached out to food safety expert David Theno, Sioux City Journal court reporter Nick Hytrek wrote. When Theno told Avila LFTB “was the safest component in ground beef at that state,” Avila questioned Theno’s credibility and hung up on him. When Theno called back, Avila said, “F*ck you!” and hung up again.

"I was troubled that he wouldn't at least listen to the other side of the story," Theno said in June, "He didn't want to listen to anything I had to say."

Theno’s comments never made it into any of ABC’s reporting. Nor did an interview with New York nutritionist and dietician Keith Ayoob, who also told ABC that LFTB “was safe and could lower the fat content of ground beef,” Hyrek reported.

Both BPI and the American Meat Institute also sent letters to ABC News prior to the March 7 broadcast which clarified the beef trimmings were not low quality and not used solely for dog food and cooking oil. Yet ABC News refused to mention the letters in any of their broadcasts, the Sioux City Journal reported on June 13, 2017.

“We looked at it [the BPI letter] and read it prior to broadcasting, but we chose not to run a portion of it,” David Peterkin told the court. Peterkin was an ABC executive director in 2012 who reviewed the pink slime reports before they aired.

ABC’s March 7 broadcast was just the beginning. “ABC produced a total of 131 communications on LFTB, including broadcasts, Tweets and Facebook posts in March and April 2012,” a content analyst hired by BPI told the court in June 2017.

Avila, who was specifically named in the BPI lawsuit, launched three other anti-meat attacks in 2012. He hyped a possible Mad Cow Disease outbreak (there was one), demonized the USDA about chicken inspections and boasted that meat consumption was down by 30 percent in the U.S.

After BPI and ABC News settled the lawsuit, Avila told reporters “it’s important to note we’re not retracting anything. We’re not apologizing for anything.”

ABC News also issued an official statement on June 27 saying “Throughout this case, we have maintained that our reports accurately presented the facts and views of knowledgeable people about this product.”

Though the specifics of the settlement are confidential, BPI was “extraordinarily pleased to have reached a settlement,” BPI attorney Dan Webb told CNN Money.

“This is a lesson about the power news organizations have if they run with inaccurate information,” BPI spokesperson Tom Becker told the Media Research Center, “The media have tremendous power and they can do real damage.”