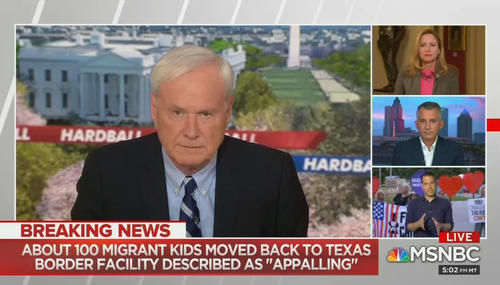 Curtis Houck
June 25th, 2019 10:52 PM
On Tuesday night, MSNBC’s Hardball stated in the A-block that the illegal immigration detention centers (yes, the ones the far-left thinks are concentration camps) are solely a Trump administration phenomenon and prove that America is “no longer....a haven for people around the world.” NBC correspondent Cal Perry reported from one such center in Homestead, Florida and… 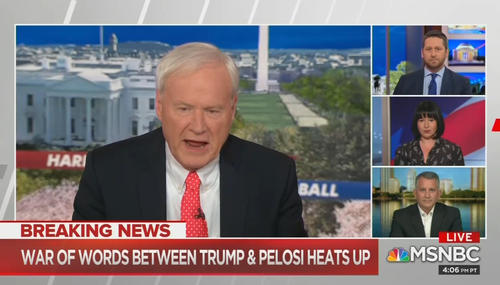 MSNBC’s Hardball host Chris Matthews took an interesting tact during a discussion Thursday night regarding impeachment and the feud between President Trump and Speaker Pelosi, challenging New York Times columnist and fellow lefty Michelle Goldberg over whether Pelosi’s actually praying for the welfare of the President considering how she’s “gaslighting” him with questions about his mental… 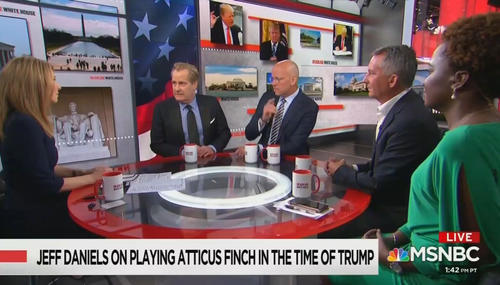 Let this serve as an example of how some liberal elites despise your way of life, who you vote for, the God you worship, and you yourselves as backward, irredeemable, and racist. On Monday’s Deadline: White House, liberal actor Jeff Daniels joined the MSNBC panel to bash their fellow Americans in the name of decency and love and fear for the country’s future. Daniels is in the midst of his… 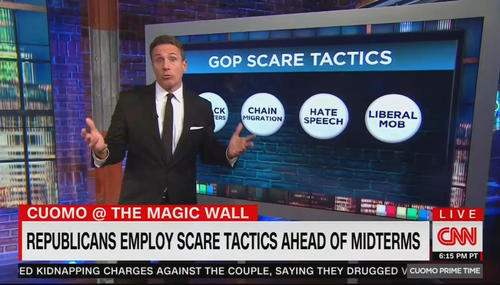 Curtis Houck
October 18th, 2018 5:27 PM
How again are the liberal media not a part of the opposition party? On Wednesday’s Cuomo Prime Time on CNN and Hardball on MSNBC, it just so happened that they ran nearly identical segments smearing Republicans for “employ[ing] scare tactics” and “fear-mongering” people into supporting the GOP at the polls. Thankfully, Brooke Baldwin wasn’t on-air during the 9:… 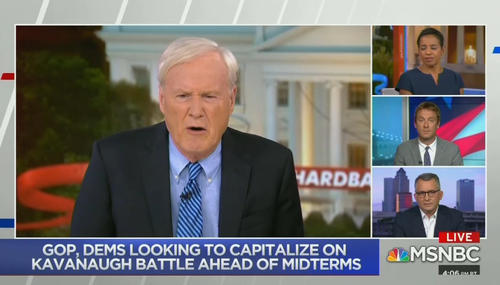 Curtis Houck
October 9th, 2018 11:12 PM
For the first 11 minutes of Tuesday night’s Hardball on MSNBC, the clownish Chris Matthews and his panel held a glorified get out the vote (GOTV) rally for Democrats. But began with Matthews gloating about his midterm forecast from April ended with the crude suggestion that America has been victimized by Trump like Dr. Christine Blasey Ford alleged she was by Brett Kavanaugh. 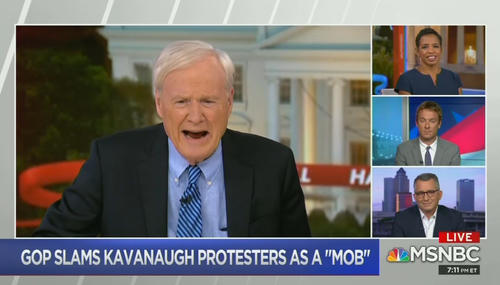 Curtis Houck
October 9th, 2018 8:36 PM
After an 11-minute-long Get Out the Vote (GOTV) effort for Democrats on Tuesday’s Hardball, MSNBC pundit Chris Matthews falsely claimed that anti-Kavanaugh protesters weren’t paid to physically corner and verbally harass Senators or try to break into the Supreme Court, comparing claims the mob was paid for to birtherism concerning Barack Obama. If that wasn’t enough, cable… 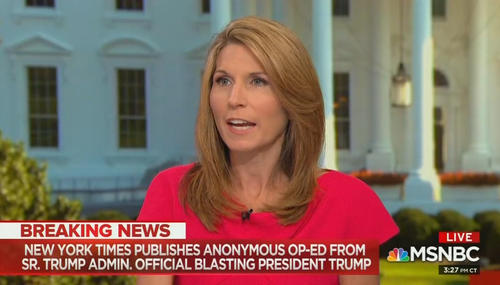 Ryan Foley
September 6th, 2018 9:43 PM
Reacting Wednesday to the anonymous New York Times op-ed written by a Trump administration official on MSNBC's Deadline: White House, host Nicolle Wallace seized on the op-ed's mention of the 25th Amendment to call on Congressional Republicans to begin hearings on removing Trump to do their part in carrying out the 25th Amendment 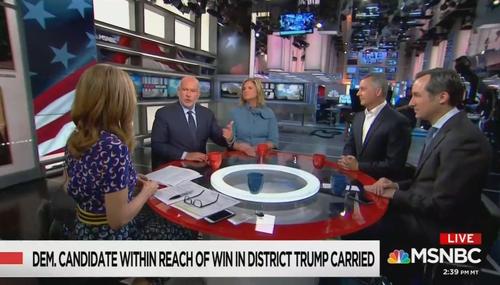 Curtis Houck
August 7th, 2018 10:40 PM
Ever want to see the TV news equivalent of a bitter crazy person shouting into the wind? Well, you’re in luck because that’s what MSNBC’s Deadline: White House is like on a daily basis and Tuesday’s installment didn’t disappoint. The assembled guests and faux Republicans bemoaned the lack of passion among elected Democrats and Republicans to impeach President… 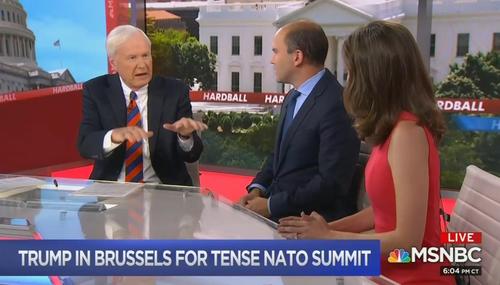 Curtis Houck
July 11th, 2018 4:01 PM
Yes, Chris Matthews said that on Tuesday’s Hardball. And, no, it didn’t appear that Matthews realized how what he said about President Trump came across as quite the case of irony. In the A-block of his MSNBC program, Matthews wondered if the world is “about to see collusion in plain sight” by “eight-year-old” President Trump and Russian President Vladimir… 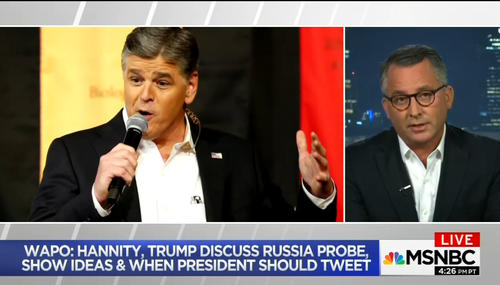 Curtis Houck
April 18th, 2018 11:36 PM
For the second time in as many days, frequent CNN and MSNBC guest/former Republican Congressman David Jolly proved his usefulness to the liberal media by not criticizing the relationship between President Trump and Fox News Channel host Sean Hannity on conflicts of interest or policy, but by cheaply condemning Hannity for not having graduated college. 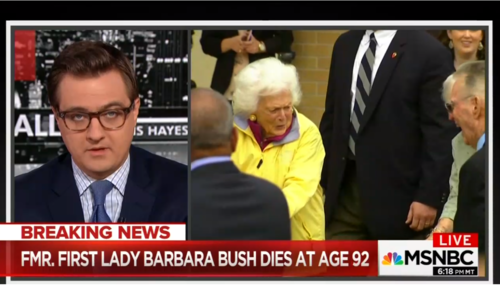 Morbid: MSNBC Uses Death of Barbara Bush to Malign State of the GOP

Nicholas Fondacaro
April 17th, 2018 9:41 PM
The news of Barbara Bush’s passing wasn’t even an hour old Tuesday night when MSNBC host Chris Hayes had his All In panel use the news to malign the current state of the Republican Party. The liberal brought on anti-Trump Republican David Jolly and former Democratic Senator Barbara Boxer (CA) to discuss how the GOP had fallen so far since it’s heyday with the Bush dynasty. 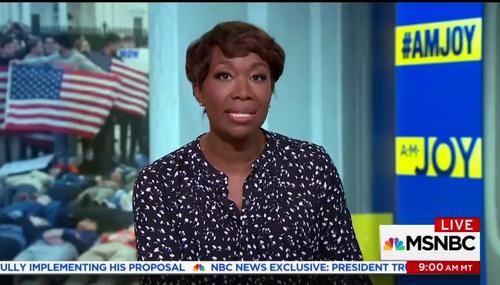 Brad Wilmouth
March 10th, 2018 2:37 PM
On Saturday's AM Joy, host Joy Reid led another panel discussion that vilified the NRA and supporters of gun rights as the MSNBC host suggested that the NRA does not care about armed teachers shooting black students by mistake, and tried to link the pro-gun group to a man arrested for making death threats against one of her guests, former Florida Republican Rep. David Jolly. Jolly -- a… 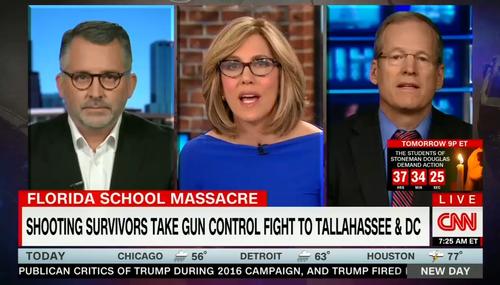 Brad Wilmouth
February 21st, 2018 11:24 AM
On Tuesday's New Day, CNN host Alisyn Camerota not only did her part to spread misinformation about how easy it is to purchase an AR-15, but she also defended liberal activist Cameron Kasky's decision to demonize the NRA as a "terrorist organization," suggesting that "calling out the NRA" in such a way "might be effective." She also got into an unusually…

Nicholas Fondacaro
February 2nd, 2018 1:04 AM
So-called fact-checking website PolitiFact proved just how much of a hack organization they were on Thursday when they announced that they were hiring former Florida Congressmen David Jolly (R) and the infamous Alan Grayson (D). The backlash was swift and came from across the political spectrum, especially for Greyson. The backlash was even present on HLN’s S.E. Cupp Unfiltered where Cupp…