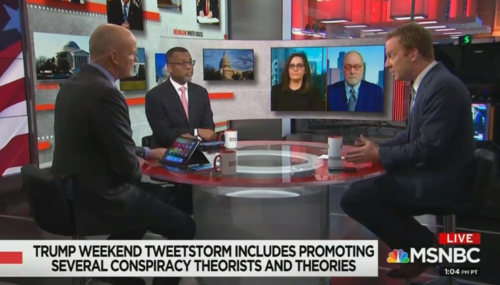 Nicholas Fondacaro
March 18th, 2019 9:35 PM
MSNBC’s Deadline: White House is known as being a hub for those willing to do or say anything to slime President Trump. On Monday’s edition of the show, they proved that to be true yet again when they dedicated the first segment to the suggestion that the President’s weekend tweetstorm was somehow an outward symptom of some sort of “crisis level” “psychological duress” brought on from a mental “… 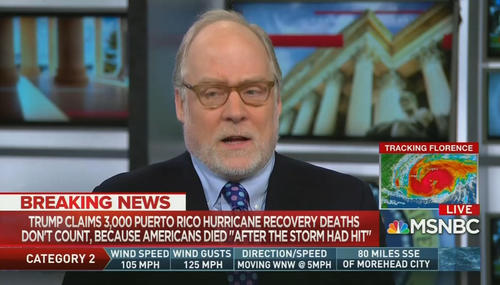 Likely still bitter after having wasted millions trying to make Jeb Bush president, Republican strategist and frequent MSNBC guest Mike Murphy quipped on Thursday’s Deadline: White House that he wouldn’t have used to a time machine to go back in time to stop Hitler but instead change Donald Trump. 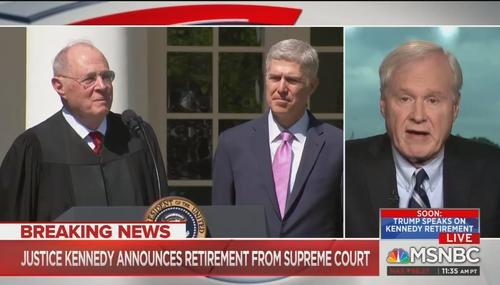 Richard Howell
June 28th, 2018 3:32 PM
Justice Kennedy announced his retirement Wednesday, and the ramifications sent the media into a frenzy over all things Supreme Court. On MSNBC Live with Katy Tury, stand-in host Steve Kornacki did not speculate on the best replacement for Kennedy but instead asked four different guests about the possibility of Republicans failing to confirm President Trump’s nominee to the high court. 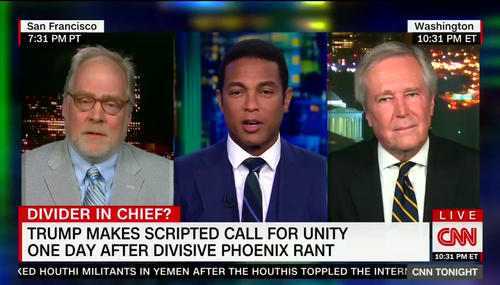 Curtis Houck
August 24th, 2017 12:11 AM
Wednesday’s CNN Tonight had no chance of surpassing the hall of shame lunacy showcased the day before after the Trump rally calling out the President’s mental health. However, host Don Lemon briefly lashed out at people who called him out, spreading lies that critics should “know better” and not make “a political point” by saying Trump’s sanity is being questioned. 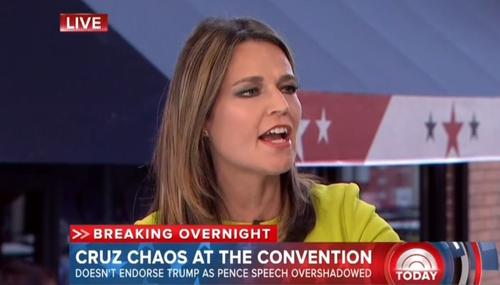 NBC: ‘Judas Cruz’ ‘Blew Himself Up’ With RNC Speech

Kyle Drennen
July 21st, 2016 11:36 AM
On Thursday, NBC’s Today blasted Ted Cruz in the most hyperbolic terms over the Texas Senator’s unwillingness to endorse Donald Trump during a Wednesday night speech at the Republican National Convention. Co-host Savannah Guthrie went biblical on the conservative lawmaker: “Peter King said it was a disgrace, that he's a liar. Chris Christie said it was an awful and selfish speech. I was walking… 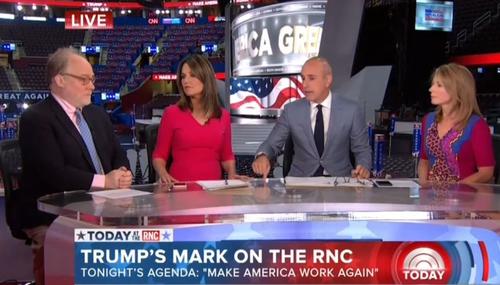 Kyle Drennen
July 19th, 2016 1:54 PM
On Tuesday, all three network morning shows worried over the Republican convention being too conservative and throwing “raw red meat” to the party base. On NBC’s Today, co-host Savannah Guthrie fretted: “Okay, let’s talk about the tone of last night. There was a lot of red meat for the base. Is that good strategy? Is this going to be a base election?” 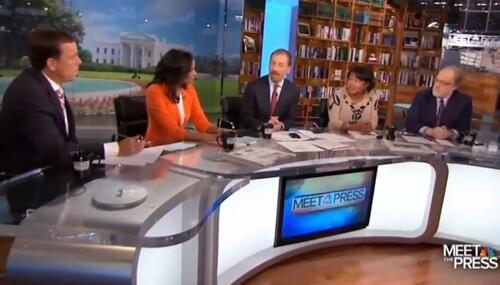 'Meet the Press' Panel: Losing Senate Would Actually Be Good for Dems

Kyle Drennen
September 15th, 2014 4:07 PM
In preparation for Democrats possibly losing control of the Senate in the midterm election, Meet the Press moderator Chuck Todd and his panel actually tried to preemptively spin such a defeat as a good thing for the Democratic Party. On Sunday, Todd proclaimed: "What everybody in Washington knows but won't say, and that is, secretly...I'm convinced, I think we know this, Hillary Clinton would… 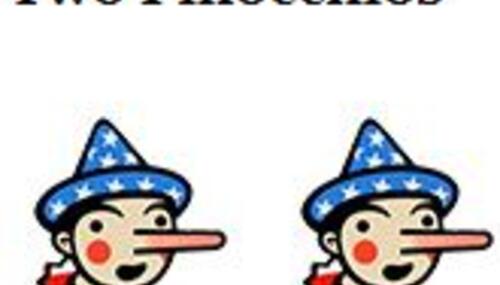 Kyle Drennen
June 24th, 2013 12:56 PM
On Sunday's NBC Meet the Press, moderator David Gregory lobbed this softball to Democratic Congresswoman Loretta Sanchez about the immigration bill being debated in Congress: "...are you going to be able to overcome conservative opposition to the idea of reforming a pathway to citizenship to get meaningful reform?" [Listen to the audio or watch the video after the jump] Later on the show,… 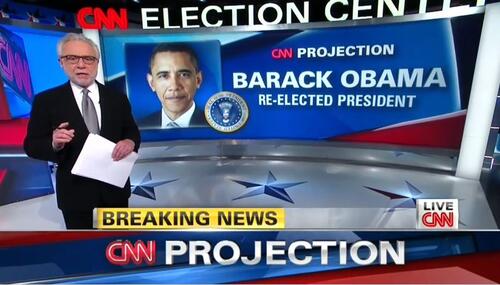 Randy Hall
November 21st, 2012 5:38 AM
Radio talk show host Rush Limbaugh responded on Monday to comments from Republican strategists Mike Murphy and Steve Schmidt, who have called on the party to “stray away from a vision” that is right out of the conservative commentator's “dream journal.” The radio personality deflected the criticism, noting that the moderate GOP consultants got the candidate they wanted -- former… 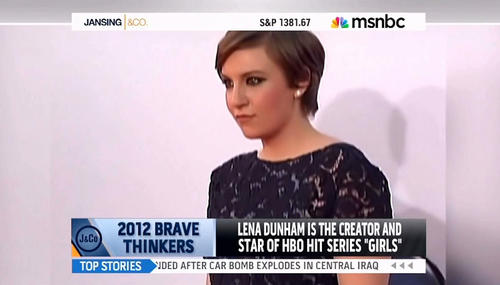 Kyle Drennen
November 19th, 2012 11:03 AM
Last week it was Republican strategist Steve Schmidt blaming Mitt Romney's loss on conservative "loons and wackos," this week on Sunday's NBC Meet the Press, fellow Republican strategist Mike Murphy joined the media chorus demanding the GOP move left: "...if we don't modernize conservatism, we can go extinct....we've got to get kind of a party view of America that's not right out of Rush… 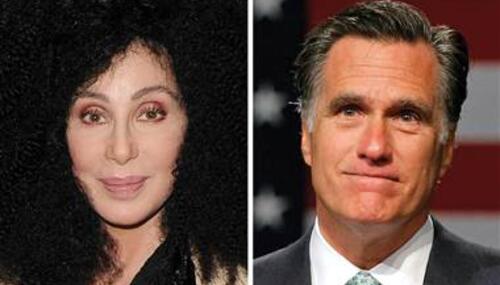 GOP Strategist Beats the Press: 'Media Assumes There's No Such Thing i

Kyle Drennen
October 22nd, 2012 3:03 PM
Appearing as a panelist on Sunday's NBC Meet the Press, Republican strategist Mike Murphy called out journalists for refusing to provide balanced coverage of abortion: "It's always amazed me how the media assumes there's no such thing in the world as a pro-life woman, it's the most under-represented, you know, group in the world, we never talk about them." [Listen to the audio or watch the… 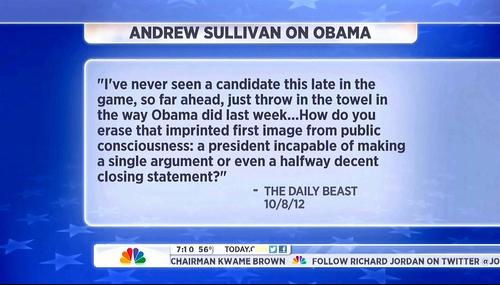 Matthew Balan
October 10th, 2012 2:56 PM
Norah O'Donnell hounded Republican strategist Mike Murphy on Wednesday's CBS This Morning, repeatedly hinting that Mitt Romney flip-flopped on the issue of abortion during his Tuesday interview with The Des Moines Register. O'Donnell conspicuously failed to mention that during the same interview, Romney promised to "reinstate the Mexico City policy....that foreign aid dollars...would not be… 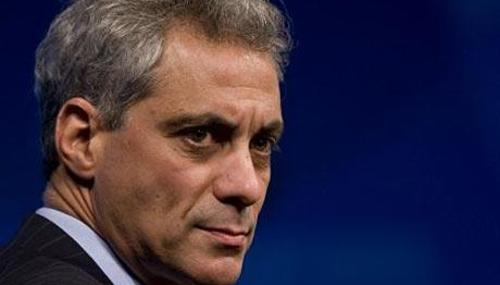 Tim Graham
July 25th, 2012 10:45 PM
The Hill reported that National Public Radio has hired the firm Navigators Global to preserve federal subsidies through the Corporation for Public Broadcasting. The House GOP majority has organized several votes and bills to defund public broadcasting, and Navigators Global is a lobbying shop chock full of Republicans -- the most notable being Mike Murphy, the former Mitt Romney strategist.…