On Tuesday, all three network morning shows worried over the Republican convention being too conservative and throwing “raw red meat” to the party base. On NBC’s Today, co-host Savannah Guthrie fretted: “Okay, let’s talk about the tone of last night. There was a lot of red meat for the base. Is that good strategy? Is this going to be a base election?”

NBC’s favorite liberal Republican, Mike Murphy, chimed in: “The problem with last night is we need a klaxon horn to blow and explain the primary is over. We’re still doing primary raw meat, which is great for the 41% we get for free and lose with. So we need the convention to expand the party and I’m not seeing that yet.”

ROBIN ROBERTS: Day two, today, what do you expect?

DONNA BRAZILE: A lot more acrimony, a lot of perhaps disgruntled delegates who will probably try to express themselves one more time when Mr. Trump's name is placed into nomination. A lot of red meat, more red meat than Outback Steakhouse.

On CBS This Morning, correspondent Major Garrett skipped the “red meat” label, but concluded his report on the event with this proclamation:

Delegates also adopted one of the most conservative platforms in Republican Party history. It includes against same-sex marriage and same-sex parenting. Calls for de-funding Planned Parenthood, a rejection of a White House directive met to address the use of school bathrooms by transgender students and calls for the construction of a wall along the entirety of the U.S. southern border.

Here is a full transcript of the July 19 panel discussion on Today:

SAVANNAH GUTHRIE: Let's chew this over with NBC political analyst, Nicolle Wallace and Mike Murphy, Republicans both of them, with us here at the table. Let’s keep this in perspective, okay? It’s not Watergate. There's no evidence that she herself is responsible for any plagiarism. But to you, Mike, what does this signal about the campaign? I mean, what do you think this does to the convention?

MIKE MURPHY: Well, if you look at the first 24 hours, the opening move was a war with the governor of Ohio, who’s hosting the convention, followed by the Colorado steamroller and tough tactics on the floor, and then we rolled into the speech-writing team of Xerox and Conaco, who I don't think are going to be on the campaign anymore. It was a very bad first day. But what counts in one of these conventions is Trump's speech later, that's the big moment. If they do good, it’ll help them. If not, they’re in trouble.

LAUER: And if that begins with, “Ask not what your country can do for you,” we’re in very big trouble.

LAUER: Let’s talk about what Paul Manafort said this –

WALLACE: Not a joke in this cycle, though.

LAUER: Let's talk about what Paul Manafort said this morning. He said there’s no cribbing, there was no copying. He doubled down, basically. Do you agree with that strategy?

WALLACE: Well, I do not agree with that strategy. There clearly aren’t press folks at the table making strategic decisions because you never subject a spouse to that. You get a spouse in and out of political controversy as quickly possible because a spouse is largely immune from the kinds of partisan attacks that come at a political figure. People root for a wife or a kid of a politician. And instead of letting her sort of get in and out of this scandal quickly, they’re going to guarantee that the campaign spends all day talking about whether or not she plagiarized Michelle Obama’s speech, which it certainly looks like she did.

GUTHRIE: Before we leave this topic, is there any doubt in your mind that it was plagiarized?

WALLACE: There is no doubt in my mind that whoever put those words on a piece of paper was very aware of what Michelle Obama said.

MURPHY: I think, you know, they’re similar stories, it’s kind of evergreen material, but it looks like somebody read that text and it stuck. 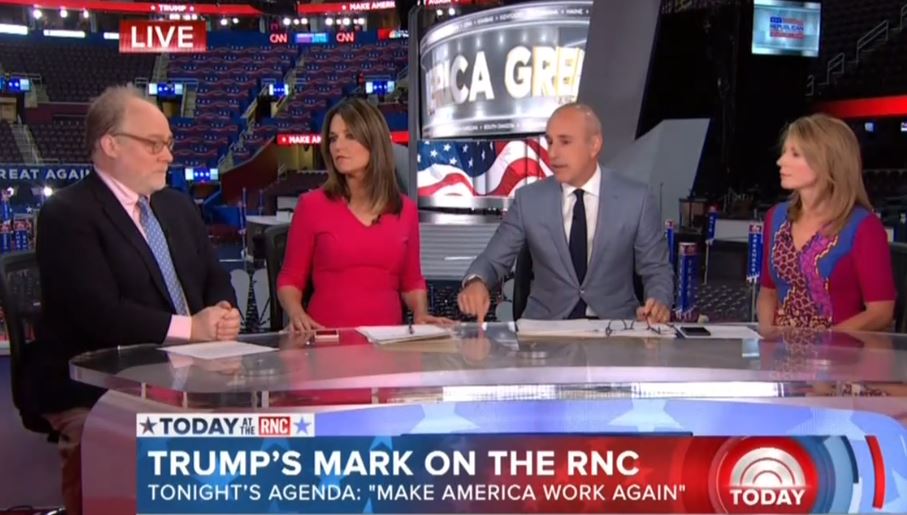 GUTHRIE: Okay, let’s talk about the tone of last night. There was a lot of red meat for the base. Is that good strategy? Is this going to be a base election?

WALLACE: Chuck Todd called it raw red meat. I mean, it was really fiery stuff. And just like everything that the Trump campaign has done so far, it was incredibly uneven. There were some  wrenching moments that had people in the room wiping their tears. There were some, you know, really compelling stories. Marcus Luttrell, the lone survivor, gave a great speech. But it was also marked with some really across-the-line rhetoric. So I’m not sure yet, and I don't think we’ll know until the convention ends how it was received in America’s living rooms.

LAUER: Let me let you way in on that, what was said last night, then I want to ask you about that floor fight yesterday.

MURPHY: The problem with last night is we need a klaxon horn to blow and explain the primary is over. We’re still doing primary raw meat, which is great for the 41% we get for free and lose with. So we need the convention to expand the party and I’m not seeing that yet.

LAUER: Colorado delegation walks out yesterday. They wanted that roll call vote on voting your conscience, they didn’t get it, they lose, but they did get attention because of it. Is that the last gasp of the Never Trump movement or do they have other opportunities over the next three days?

MURPHY: They have other optic opportunities. There’s no real rules opportunity to do anything meaningful. I mean, they’ve lost that fight. But they still have the power to do some disruption because the truth is this is the most downbeat convention I’ve been to for a long time. There is not a lot of delegate excitement among at least half the delegates for Donald Trump.

GUTHRIE: Okay, but what grade do you give the entrance? The Trump entrance in behind the scrim and the wall.

WALLACE: I’m sorry, A-plus. I’ve never seen anything that before.

MURPHY: I think David Copperfield’s gonna sue. A little too Vegas for me.

LAUER: And that was here in the convention.