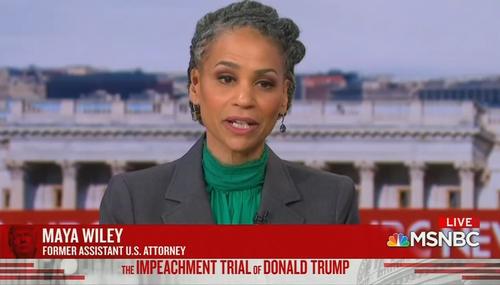 MSNBC's Judgment: Trump Enablers with Satan, the Democrats with Jesus

Tim Graham
February 3rd, 2020 2:35 PM
In today's outbreak of MSNBC Theology, legal analyst Maya Wiley lit into Sen. Lamar Alexander for allegedly sitting on Satan's fence, and therefore belongs to Satan. Given the channel's tilt, we can guess that the Pelosis and Schiffs are on the Jesus side, and Trump and his Republican enablers are with Satan. 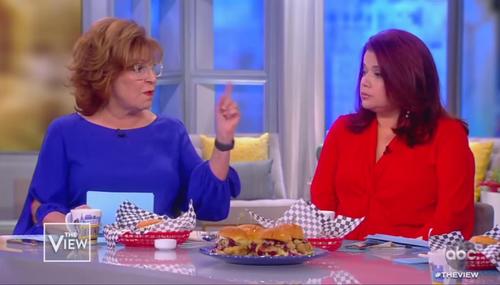 Kristine Marsh
January 31st, 2020 2:56 PM
The View hosts implored God to save America from President Trump, on Friday, after finding out there wasn’t enough votes from Republicans to allow witnesses in the Senate impeachment trial. Co-host Sunny Hostin seethed that the GOP was now a party of “extremists” who dismantle democracy and the Constitution for power. Friday co-host Ana Navarro tried to find the silver… 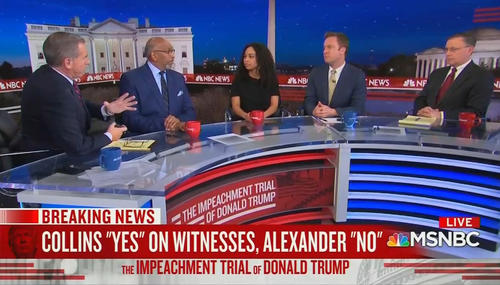 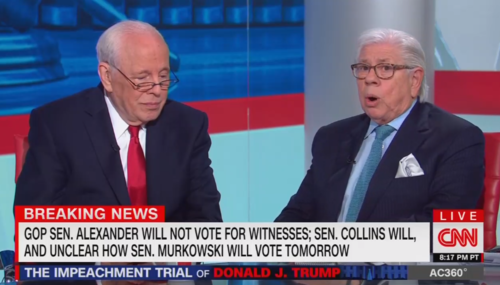 Nicholas Fondacaro
January 31st, 2020 12:47 AM
Tennessee Senator Lamar Alexander was the last of four moderate Republicans the liberal media had held out hope for voting to hear more witnesses in the impeachment trial. But shortly after the Senate trial ended the question and answer portion, the Senator made it known he was finished hearing the evidence and was ready to vote. Upon hearing this development, CNNers (particularly those… 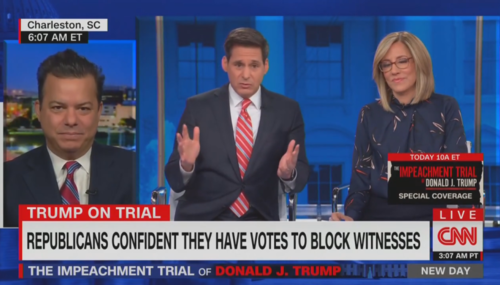 CNN's Avlon: Alexander Must Vote for Witnesses to 'Save Republic'

Mark Finkelstein
January 30th, 2020 10:32 AM
On New Day, angst-filled CNN political commentator John Avlon asks, "will the headline be: Lamar Alexander saves the republic, or saves the Republican party?" In other words, the republic will be lost if Alexander votes against witnesses.

Michelle Malkin
June 13th, 2012 5:58 PM
During the summer of 2009, conservative activists turned up the heat on Democratic politicians to protest the innovation-destroying, liberty-usurping Obamacare mandate. In the summer of 2012, it's squishy Republican politicians who deserve the grassroots flames. In case you hadn't heard, even if the Supreme Court overturns the progressives' federal health care juggernaut,… 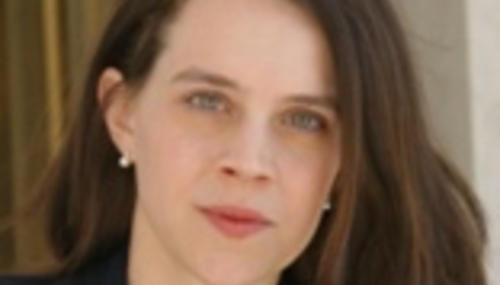 Noel Sheppard
November 2nd, 2010 8:45 AM
Politico's Mike Allen on Monday told Laura Ingraham the only way to do a piece about what Washington insiders are really thinking is to get anonymous opinions from unnamed sources unwilling to go on the record. Less than 24 hours later, New York Times columnist David Brooks showed Allen how wrong he is in an article about what Republicans are feeling heading into Tuesday's midterm…

Kyle Drennen
May 24th, 2010 6:02 PM
On Sunday's Face the Nation on CBS, host Bob Schieffer interrogated Republican Senator Lamar Alexander on GOP senate nominee Rand Paul: "Can you see yourself supporting a candidate who takes those kinds of positions, Senator?" However, Schieffer lobbed softballs to Democratic senate nominee Joe Sestak minutes later, who claimed the White House offered him a job to quit the primary race…

Brent Baker
February 28th, 2010 2:13 PM
Quite a contrast in how ABC’s Elizabeth Vargas, taking her turn hosting This Week, approached House Speaker Nancy Pelosi versus Republican Senator Lamar Alexander, all before agreeing with Sam Donaldson when he urged President Obama to become “ruthless” to pass his health care reform bill since that’s what FDR and Truman “would have done.” She affirmed: “That's a good point.”With Pelosi, she…

George Will Schools Krugman On ObamaCare Driving Premiums Up

Noel Sheppard
February 28th, 2010 1:26 PM
George Will Sunday gave New York Times columnist Paul Krugman a much-needed lesson on what happens if ObamaCare is passed.Krugman wrote a piece Friday accusing Sen. Lamar Alexander (R-Tenn.) of lying at Thursday's healthcare summit about premiums going up if the Democrats' plan is enacted.During the Roundtable segment of Sunday's "This Week," Will pointed out, "You said in the next…

Kyle Drennen
December 7th, 2009 12:06 PM
On Monday’s CBS Early Show, co-host Maggie Rodriguez pressed Republican Senator Lamar Alexander on the GOP’s opposition to ObamaCare: “...there’s been a lot of criticism that Republicans have done nothing but oppose this bill, nothing to help pass it, just try to kill it....have you done more than say ‘no, no, no, no, no’?”At the top of the show, Rodriguez described a weekend visit by President…

Lachlan Markay
October 22nd, 2009 1:58 PM
How do you know that the White House's anti-Fox News campaign has gone seriously wrong? When CNN, let alone Anderson Cooper, begins to compare the Obama and Nixon administrations (video embedded below the fold, h/t Mediaite's Colby Hall).On last night's "360," Cooper stated that "this White House is starting to look like another White House and the comparison is not flattering.…

Noel Sheppard
October 21st, 2009 1:09 PM
A top Republican Senator who used to work for President Richard Nixon has warned the Obama administration to not create an "enemies list" like that of his former employer.Sen. Lamar Alexander (R-Tenn) in his speech on the Senate floor Wednesday listed a number of recent events that uncomfortably remind him of how the Nixon White House treated everyone in America that didn't agree with…