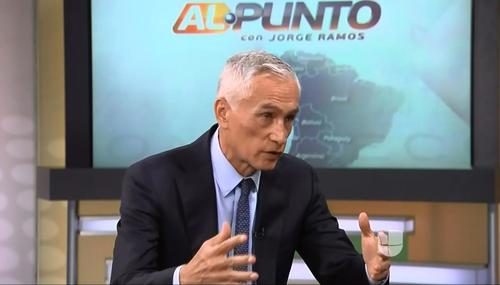 Jorge Ramos Comes Out Against Deportation of Criminal Aliens

Latino
Jorge Bonilla
December 14th, 2016 8:00 AM
This interview is perhaps the most consequential to emerge from Univision's still-smoking post-electoral rubble. Over the course of a few minutes, we are shown a definitive editorial direction, and we are treated to admissions that were unimaginable a little over a month ago.

Mark Finkelstein
May 23rd, 2010 4:06 PM
It's turned into something of a week for TV hosts, if not to bite, then at least to nibble hard on the hands that feed them . . . First, as noted here, on Friday Joe Scarborough passed along the comment of an unnamed conservative biggie who wondered "what the hell [Rand Paul] was doing on MSNBC?", where during an interview with Rachel Maddow he caused controversy with his comments on…

Sharpton: Prior to '78, Mormons Weren't 'Real Worshippers of God

Matthew Balan
May 8th, 2007 5:43 PM
Apparently, CNN can't get enough of Kathleen Sebelius, the Democrat governor of Kansas. She made two appearances on CNN on Monday, once on "American Morning," and the other time on "The Situation Room." Both times, she tried to blame the Iraq war for any hampered reactions to the devastation caused by a tornado in Greensburg, Kansas. The same evening, the "Paula Zahn Now…

Olbermann Revels in 'Racist' Limbaugh Getting Yanked Like Imus: 'Best

Brent Baker
April 12th, 2007 10:02 PM
Keith Olbermann opened his Wednesday MSNBC show by displaying video of Rush Limbaugh on screen as he smeared conservative talk radio as “racist,” asking, “Why have none from the racist right been protested, boycotted or fired?” He then delighted Thursday night when guest Sam Seder, of the far-left Air America Radio, predicted “the next time Limbaugh slips up, which I think is inevitable, I think…

Tim Graham
March 8th, 2007 10:59 PM
CNN put together a story featuring reporter John Roberts that absolutely hammered Vice President Cheney on Wednesday night’s Paula Zahn Now, concluding with an anonymous Republican suggesting the party needed an "exorcism" to rid itself of all its missteps and corruption.When the Laura Ingraham show played clips, Ingraham suggested reporter John Roberts should call in – and he did.…

Brent Baker
March 8th, 2007 10:01 PM
Time magazine's cover story image as reality? Displaying a mini-instance of pack journalism, MSNBC and CNN shows on Thursday afternoon and night pounced on Time magazine's cover story, “The Verdict on Cheney” beside a picture of Cheney under some dark clouds, as evidence Cheney's influence is declining in the White House in the wake of the Scooter Libby verdict. It may be, but the graphics on a…

The NewsBusters Weekly Recap: February 3 to

Scott Whitlock
February 9th, 2007 10:55 AM
This week, Chris Matthews' anti-Bush bigotry spilled over into a profanity laden rant. The "Hardball" host dropped the F-bomb during a live interview with Don Imus. Meanwhile, CNN’s Paula Zahn connected opposition of illegal immigration to, you guessed it, the Ku Klux Klan. This is the same network, however, that tried to downplay proven religious bigotry by a blogger for the John…