Who can turn the world on with his snark? For liberals, it’s long been Jon Stewart, whose Tuesday announcement that he’s in his stretch run as host of The Daily Show caused three writers for the lefty site Salon to reflect on what he’s meant to them, and to the nation.

TV critic Sonia Saraiya recalled in a Tuesday-night piece how Stewart tried to calm America’s post-9/11 jingoistic frenzy: “As the rest of the world went into incomprehensible patriotic overdrive—every 24-hour network adopted a news ticker, every politician started wearing a flag pin, and the armed forces started preparing for war against someone—‘The Daily Show’ appealed to the viewer’s sanity, to their humanity, to their sense of reason.”

Stewart, Saraiya argued, has served not just as a beacon of hope but also as a de facto “liberal organizer and rallying point” (bolding added): 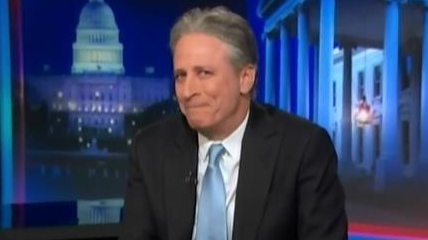 If the voice of the people is the voice of God—if comedy is the second, far more critical draft of history, following the news—then Jon Stewart is one of the most influential political figures of our era, despite having never run for public office, written a word of policy, or strategically donated millions and millions to a special-interest group. But his show, and his perspective, and his steadfast commitment to liberal-minded sanity got a lot of us through eight years with a crappy president and eight election cycles in a country that is increasingly polarized on the most basic civil rights, on the most essential responsibilities of government.

Stewart was the liberal organizer and rallying point before Obama’s presidency was a twinkle in David Axelrod’s eye; as difficult as it has been to advance a progressive agenda over the last 16 years, it would likely have been impossible without Stewart’s ability to connect to millions of viewers and remind them that they weren’t alone in hoping for something better—better from government, better from media, better from each other.

Steve Almond, a frequent Salon contributor and the author of Against Football, wondered on Wednesday whether liberals, once they lack both Stewart and Stephen Colbert’s faux-righty character as regular sources of entertainment, might intensify their activism (bolding added):

…A Marxist would have a hard time resisting the notion that comedy, and “The Daily Show” in particular, has become the chosen opiate of the Left.

…Is it possible that losing two comic giants, first Colbert and now Stewart, might actually be good for America? That the time has come for us to confront the decay of our civic institutions and the vacuum of leadership in our democratic systems—without pacifying punch lines?

After all, in the past our collective agitation led to moral progress. Abolitionists helped stoke a war against the slave states. The Crash of 1929 brought us the egalitarian policies of the New Deal. Citizen activism brought us the Civil Rights Act and an end to the Vietnam War. The iniquities of Watergate led to campaign finance reform…

For those of us who loyally watched Stewart over the past 15 years, perhaps the time has come for us to feel the anguish he and his staff dependably converted into laughter. How else might we begin to confront the very real existential threats to our country and planet?

Finally, Penn State professor Sophia McClennen, Salon’s unofficial chief Stewart/Colbert correspondent, warned somberly on Wednesday that Stewart’s announcement is “devastating news” that “signals not just a loss for satire, but also a threat to the health of our democracy.”