Poor Juan Williams. So occasionally correct, as when he wrote forcefully on the damage done by an urban culture which has made so many black children "believe that excelling in math and science is 'acting white.'"

But he's also so often egregiously wrong, perhaps never moreso than in his Monday column at the Hill. Williams is astonished that a recent poll, consistent with others, shows that over two-thirds of blacks support a photo identification requirement for voting. In the process, he cited perhaps the dumbest statistic I've ever seen on the topic, misrepresented a 2013 Supreme Court decision, and failed to understand that blacks may end up being most adversely affected if voter fraud ever become widespread.

Excerpts (bolds and numbered tags are mine):

Juan Williams: Dems should not be losing voting-rights fight 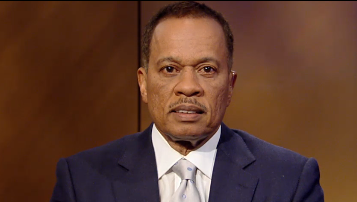 Why are Democrats losing the debate over voting rights?

... Even most black Americans — people who, overwhelmingly, don’t vote Republican — currently favor new requirements for voters to have photo identification. Three-quarters of all voters — people of all races and political parties — favor such laws, according to polls.

The black support for photo identification of voters can only be described as amazing.

The current state of public opinion, including among the black community, is doubly incredible because there is no evidence of widespread voter fraud anywhere in the nation.

Jill Lawrence recently wrote in U.S. News and World Report that “a recent study of more than 1 billion ballots cast from 2000 to 2014 found 31 credible instances of voter impersonation ... 31 out of over 1 billion.” [1]

... Studies show that black, Hispanic, young and elderly people who are qualified voters are the people least likely to have photo identification and most likely to get turned away at the polls. [2]

So how can it be that 71 percent of African-Americans in a new Rasmussen poll say they favor the use of photo identification before anyone can vote?

... 50 years ago this summer, President Johnson signed the 1965 Voting Rights Act. The Republican majority on the Supreme Court struck down the heart of the law in 2013. [3] The GOP majority in Congress has done nothing to restore it.

[1] — Let's start with the disingenuous language shift. Williams moves from "voter fraud" to "voter impersonation" as if they're the same thing, which they're not.

Even limiting the discussion to voter impersonation, the "31 out of a billion" statistic is absurd on its face, and the way the left has used it has exponentially distorted the picture.

Justin Levitt, the author of the study, in an October 2014 Washington Post piece, contended that voter ID laws:

... are designed for pretty much one thing: people showing up at the polls pretending to be somebody else in order to each cast one incremental fake ballot.

First of all, that's not true. The photo ID requirement also applies to absentee ballots in many states. Although obviously no on-the-spot facial comparison is possible, a fraudulent absentee voter knows that the chances of being caught are still a bit greater, and that if they are caught, the evidence supporting a conviction is far more compelling.

Williams and others have used it to give people the impression that only 31 ballots were involved; otherwise Williams wouldn't have repeated "31 in a billion" as if it was an apples-to-apples comparison.

It's not. Levitt chronicles 31 instances, "some of which involve multiple ballots." Levitt didn't have the courtesy to tell readers how many estimated ballots were involved (I wonder why?). The answer, based on an eyeball review of his list of 31, is about 250. Two of the items involve a likely range in the number of ballots involved.

For some reason (again, I wonder why?), he saved the four of the most blatant examples involving the largest number of ballots for the final four items on his list. The examples include one involving a person who voted in five different elections, another where 44 ballots were cast in the names of people who were in prison at the time (and thus not eligible to vote), and two where votes were cast on behalf of a combined 149 people who had died.

Levitt's number 17 has a range which could go anywhere from 4 to dozens, if not hundreds:

June 2007: The two contending city council candidates in a municipal runoff election in Hoboken, NJ, both reported instances in the election in which someone went to the polls and found out that someone else had voted in their place.

The "there is almost no voter fraud" crowd will of course cry that even 300 or so ballots out of a billion is inconsequential. But there are at least three problems with that.

The first is that while Levitt claims that his list is "comprehensive," it's not. I know of at least two more instances of voter impersonation involving almost 30 ballots just in Ohio, and I don't pretend to comprehensively follow it as Levitt does.

Levitt writes that "(since) 2008, when the Supreme Court weighed in on voter ID, I looked at every single allegation put before the Court. And since then, I’ve been following reports wherever they crop up." Then why did he go back to 2000 in estimating the number of ballots cast? Was it so he could get a nice, big round number of 1 billion?

Because he only really started in 2008, Levitt of course missed the following report out of Cleveland's Cuyahoga County in 2006:

NewsChannel5, in partnership with the National Institute for Computer Assisted Reporting, conducted one of the most extensive reviews ever of Cuyahoga County voting records, Pohlman reported. The process involved comparing more than 200,000 voters against death records reported by the Social Security Administration.

... Pohlman reported the examination of the records ... uncovered 27 people who are dead, but votes were cast in their name anyway.

It doesn't seem like too much of a stretch to believe that similar studies done throughout the country would surface many hundreds, if not thousands, of additional "ghost votes."

In choosing to employ the 1 billion figure, Levitt should have gone all the way back to 2000 and found older fraud-related reports instances like the one I just noted. Currently, he gives many people, clearly including Jill Lawrence of US News and Williams, the impression that he went back an additional eight years.

Levitt missed at least one more current instance of voter impersonation in my area, leading me believe that he has likely missed many. many others throughout the USA. A review of Hamilton County, Ohio's November 6, 2012 General Election Investigation Report indicates that a Carolyn A. Johnson "voted once," but that "someone voted again under her name."

The second obvious problem with Levitt's accumulation is one we can't expect him to solve, because his list and the other just-identified instances he missed represent only the people who were officially caught. As the Cleveland "ghost voter" item showed, there are a lot of people who have committed voter fraud but have never been apprehended. Additionally, voter fraud is a low-priority item for many prosecutors (again, I wonder why?), so it's likely that many cases which should be prosecuted never are.

The third point which Levitt doesn't appreciate is that requiring photo ID at the polls limits the options of those intent on committing voter fraud. The Hamilton County report I cited includes many instances of people who were caught voting in person and by absentee. If it becomes very risky to impersonate someone at the polls, and it becomes evident that duplicate in-person and absentee voting won't work, someone trying to commit voter fraud is probably going to try to accomplish their mission through fraudulent absentee voting.

[2] — Those studies don't cites actual instances of actual people turned away. Instead, as was the case with Wisconsin and Virginia, "researchers" (i.e., political motivated pretenders) have dishonestly tried to convince the courts that "hundreds of thousands" might be disenfranchised by the state's voter-ID laws. The claims haven't held up to even cursory scrutiny.

[3] — The Supreme Court did not, as Williams asserted — or as the New York Times contended when the ruling came down — strike down "the heart of" the Voting Rights law in 2013. The Justices concluded, 48 years after the Act's original passage, in accordance with that law's provisions, that "nine states, mostly in the South ... (could) change their election laws without advance federal approval." Often overlooked is the fact that the ruling also removed the heavy hand of Uncle Sam from "scores of counties and municipalities in other states, including" tiny enclaves known as "Brooklyn, Manhattan and the Bronx." In other words, all the court's ruling did is restore those areas' control over their own destinies in electoral matters — something the rest of the country has enjoyed on an uninterrupted basis.

Finally, there's the matter of Williams's bewilderment at blacks' support for voter ID.

Most of it is common sense, and even Williams admits it:

People say that if you need a photo ID to fly or check into a hotel, why not the same for voting? They forget voting is a constitutional right.

Good heavens, the fact that voting is a constitutional right makes it even more important that the process have integrity. People, including blacks not fully brainwashed by race hustlers who pretend they are civil rights leaders, get that.

Blacks may have a special reason to be behind voter ID, because Democrats' identity-obsessed political allegiances seem to moving in the direction of Hispanics. That's because more Hispanics are voting.

Far from all of those votes are legal:

Using an enormous database of voters nationwide (32,800 from 2008, and 55,400 in 2012), the authors find that about one-quarter of the non-citizens who participated in the survey were registered to vote. Studying survey responses, the authors judge that non-citizen voters tend to favor Democratic candidates by large margins.

A significant majority of non-citizens is Hispanic. An increase in fraudulent voting by non-citizens, made easier if there are no photo ID requirements, will only hasten that political shift, leaving the blacks, who have for now virtually mortgaged their future to the Democratic Party, without any effective advocacy.