At the Associated Press late Thursday morning, Ken Dilanian, the wire service's intelligence writer, did a marvelous job of covering up the essence of Director of National Intelligence James Clapper's Worldwide Threat Assessment testimony before the Senate Armed Services Committee.

The trouble is that if he were doing his job as our Founders anticipated he would when they gave the nation's press extraordinary and then unheard-of freedoms, he would have covered the story instead of covering it up.

The obviously most important element of Clapper's testimony (page containing link to PDF file is here; video is here) is that he contradicted a specific statement made by John Kerry very recently about how marvelously safe today's world is.

Kerry told the House Foreign Affairs Committee earlier this week that "we are actually living in a period of less daily threat to Americans and to people in the world than normally — less deaths, less violent deaths today than through the last century."

Clapper must not have read the memo, or perhaps got missed on the daily koolaid delivery — or maybe Kerry is twisting "violent deaths" in a national security discussion to include car accidents. Clapper told Senate committee members and the nation that "When the final accounting is done, 2014 will have been the most lethal year for global terrorism in the 45 years such data has been compiled," and that "2014 saw the highest rate of political instability since 1992, the most deaths as a result of state-sponsored mass killings since the early 1990s, and the highest number of refugees and internally displaced persons, or IDPs, since World War II."

The AP's Dilanian did not quote either item, and deferred his treatment of the ongoing general global terrorist threat until the 13th paragraph of his story, instead focusing his first 12 paragraphs on cyberterrorism — a critical issue, but clearly not the most important takeaway from Clapper's testimony.

And when he finally got there, Dilanian made it seem less important than cyberterror:

Beyond cyber, the assessment surveyed an increasingly uncertain world, noting the existence of more terrorist safe havens than at any time in recent history. 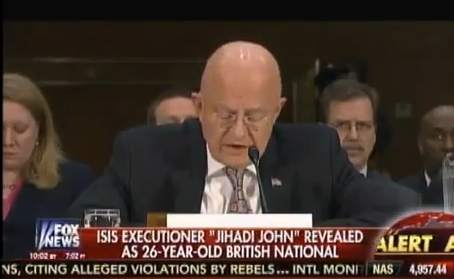 On terrorism, the assessment noted that "Sunni violent extremists" such as the Islamic State group are "gaining momentum" and that the groups "challenge local and regional governance and threaten U.S. allies, partners, and interests."

"The threat to key US allies and partners will probably increase, but the extent of the increase will depend on the level of success that Sunni violent extremists achieve in seizing and holding territory," the assessment says.

Another variable is "the durability of the U.S.-led coalition in Iraq and Syria," the assessment says.

"Homegrown violent extremists continue to pose the most likely threat to the homeland," Clapper said.

If there's a silver lining, and it's a small one, Dilanian at least used the word "Islamic" in his coverage. Clapper always referred to ISIL and never uttered any form of "Islam" or "Muslims."

And of course, Dilanian didn't mention how what Clapper said directly contradicted the Obama administration's Secretary of State.

That's because, as noted earlier, instead of covering the news as our Founders envisioned when they adopted the First Amendment, his job was as a member of the Associated Press, aka the Adminsitration's Press, was to cover it up.