The Associated Press is obsessed with global warming. It currently has seven items at its national site containing that term.

Two of them relate to how the U.S. is allegedly exporting more pollution, and therefore more global warming, to other countries even as it supposedly is cleaning up its act. These are the kinds of stories which the rest of the press would eagerly jump on if a Republican or conservative were in the White House, but they're basically getting the silent treatment (AP's Monday afternoon before Christmas publication may also have dampened interest). But the item I want to pick on predictably comes from the wire service's "Science Writer" and chief global alarmist Seth Borenstein, who two weeks ago set out to convince readers, with the help of a ginned-up federal report, that "The ice is melting! The ice is melting!" (bolds are mine throughout this post): 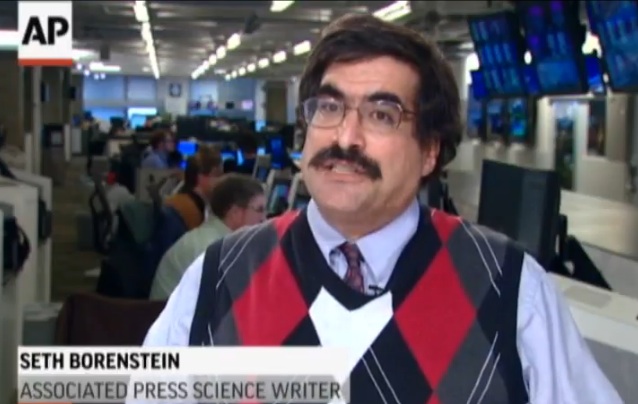 The Arctic and its future are looking dimmer every year, a new federal report says.

In the spring and summer of 2014, Earth's icy northern region lost more of its signature whiteness that reflects the sun's heat. It was replaced temporarily with dark land and water that absorbs more energy, keeping yet more heat on already warming planet, according to the Arctic report card issued Thursday.

Spring snow cover in Eurasia reached a record low in April. Arctic summer sea ice, while not setting a new record, continued a long-term, steady decline. And Greenland set a record in August for the least amount of sunlight reflected in that month, said the peer-reviewed report from the National Oceanic and Atmospheric Administration and other agencies.

... The report illustrates instead a relentless decline in cold, snow and ice conditions and how they combine with each other. And several of those have to do with how the Arctic reflects sun heat

The Arctic's drop in reflectivity is crucial because "it plays a role like a thermostat in regulating global climate," Jeffries said, in an interview. As the bright areas are replaced, even temporarily, with dark heat-absorbing dark areas, "That has global implications."

The world's thermostat setting gets nudged up a bit because more heat is being absorbed instead of reflected, he said.

Somehow, while all of this alleged "nudging" has been going on, global warming has been at a standstill, or "pause" (the alarmists' preferred term) for over 18 years, as Christopher Monckton noted earlier this month at Climate Depot:

Since October 1996 there has been no global warming at all (Fig. 1). This month’s RSS temperature plot pushes up the period without any global warming from 18 years 1 month to 18 years 2 months (indeed, very nearly 18 years 3 months). Will this devastating chart be displayed anywhere at the Lima conference? Don’t bet on it.

Figure 1. The least-squares linear-regression trend on the RSS satellite monthly global mean surface temperature anomaly dataset shows no global warming for 18 years 2 months since October 1996. The hiatus period of 18 years 2 months, or 218 months, is the farthest back one can go in the RSS satellite temperature record and still show a sub-zero trend.

What will the chart look like this time next year, at the beginning of the Paris world-government conference, at which the Treaty of Copenhagen will be dusted off and nodded through by the scientifically illiterate national negotiating delegates of almost 200 nations, ending the freedom and democracy of the West and putting absolute economic and political power in the hands of the grim secretariat of the UN climate convention?

I don't know, but I guess we had better figure out how to stop it, don't you think, folks?

Meanwhile, Steven Goddard at Real Science noted today that the fear of disappearing sea ice about which Borenstein has repeatedly written are unfounded:

The area of Arctic sea ice is nearly identical to 30 years ago.

... All of these things are the exact opposite of what experts forecast.

Look for them to continue to lie about this for as long as they can get away with it.

Given the Paris meeting cited above, one certainly hopes that the lying can't sustain itself much longer. The liars' cause is certainly helped by the press's contrary information blockade in these matters.

Thus, December has been a particularly rough month for the alarmists.

May the rough patch continue, and worsen.