Certain members of Congress abused their positions Monday to imply that "Hands up, don't shoot" was something Michael Brown actually said before he was killed by police officer Darren Wilson in Ferguson, Missouri in August.

On Friday, the Associated Press irresponsibly gave voice to those who say that the slogan is now a "metaphor" for police brutality targeted against blacks, even though the claim that Michael Brown did or said any such thing has been completely discredited by the physical evidence and the grand jury's credible witnesses. In covering the congressional histrionics, Lucy McCalmont at the Politico, aka Pathetico (HT Seton Motley) took things to the next level.

McCalmont effectively treated the slogan as valid by failing to note its lack of basis: 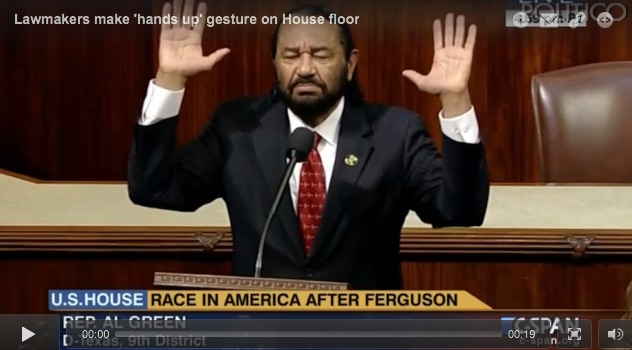 Several lawmakers took to the House floor Monday evening to make the “Hands up, don’t shoot,” gesture to protest the police shooting of the unarmed Ferguson teen, Michael Brown.

Really? "Rural communities across America?" Got any specifics there, Mr. Jeffries?

... Joining Jeffries were Reps. Yvette Clarke (D-N.Y.), Sheila Jackson Lee (D-Texas) and Al Green (D-Texas), who praised the handful of St. Louis Rams’ players for also making the “hands up” gesture as they entered the field for their game on Sunday.

“This has become the new symbol, a new statement, a statement wherein people around the country now, are calling to the attention of those who don’t quite understand that this is a movement that will not dissipate, it will not evaporate. It is a movement that is going to continue,” Green said on the floor.

If we're to believe that it's a "movement" — it's more like an orchestrated campaign by at the very most a few thousand die-hard "progressives" and communists desperate for a cause — it's based on a lie.

Wilson testified before the grand jury that Brown reached for his (Wilson’s) gun and a struggle for the gun followed, during which Wilson fired two shots. Later, Wilson pursued Brown and, after he turned and then charged toward Wilson, fired multiple shots bringing him to the ground about 8 to 10 feet away from him.

The physical evidence is consistent with his testimony.

... At some point in the altercation, it appears undisputed that Brown (and his friend Dorian Johnson) ran away from Wilson. Wilson pursued on foot and, according to Wilson, Brown eventually paused, turned around, and then charged at him.

There is no excuse for McCalmont's failure to note that the "Hands up, don't shoot" slogan has no basis in fact. Her report, and any report which doesn't identify that reality, is a de facto accessory to building a myth.