CNN’s Reliable Sources devoted most of its show Sunday to the Brian Williams scandal, but host Brian Stelter made sure that Williams defenders in the liberal elite, from Joe Klein to Bill Moyers, were quoted and discussed. Stelter didn’t interview or quote any conservative critics of Williams, although he did interview Iraq war pilots and Lt. Gen. Russel Honore, who oversaw Katrina relief efforts.

Stelter quoted Bill Moyers from Twitter to former network reporter and analyst Jeff Greenfield, now with The Daily Beast. Moyers linked to a piece on his own website making the usual charge that the liberal media "aggressively cheer-led an invasion predicated on a massive falsehood: the Iraqi possession of WMD...From embedded journalists to ultra-militaristic news logos and music, US television news media were more than willing to throw gas on the invasion fire."

#BrianWilliams's helicopter lie is nothing compared with the misinformation spewed by US press in lead-up to Iraq War http://t.co/ZjeJbnUPsR

STELTER: Jeff, let me put a tweet on screen from Bill Moyers. He's linking to a colleague of his, what he wrote online yesterday. It says: "Brian Williams's helicopter lie is nothing compared to the misinformation spewed by U.S. press in lead-up to Iraq War."

Jeff, there's been a lot of jokes saying Brian Williams is being the only one punished for lies involving Iraq. Is there some truth to the idea that we're focusing so much on this and ignoring some of those bigger issues?

If a conservative had been on set, this was an obvious fat pitch to whack. Does Stelter really believe that liberals didn’t spend the last decade roasting the press and Team Bush for lying about (or going soft on false information) on the war in Iraq? Moyers himself was able to create and air a showy PBS documentary in 2007 called Buying the War. Greenfield answered:

GREENFIELD: Yeah, there's a great irony here that one of the legitimate, many legitimate critiques of the media is that they tend to focus much more on, say, personalities in a political campaign than more fundamental issues.

And certainly, if you compare the damage, apart from the damage done to NBC, from Brian Williams' misstatements or lies or whatever they are compared to what the consequences were of bad, or inaccurate or negligent reporting in the run-up to the war in Iraq, it's geometric. It's an enormous gap.

There’s a logical fracture in this argument. A lie doesn’t have to result in actual casualties of war to ruin someone’s trust with an audience. Just lying about being in a helicopter hit by a grenade can be damaging enough. Greenfield continued: 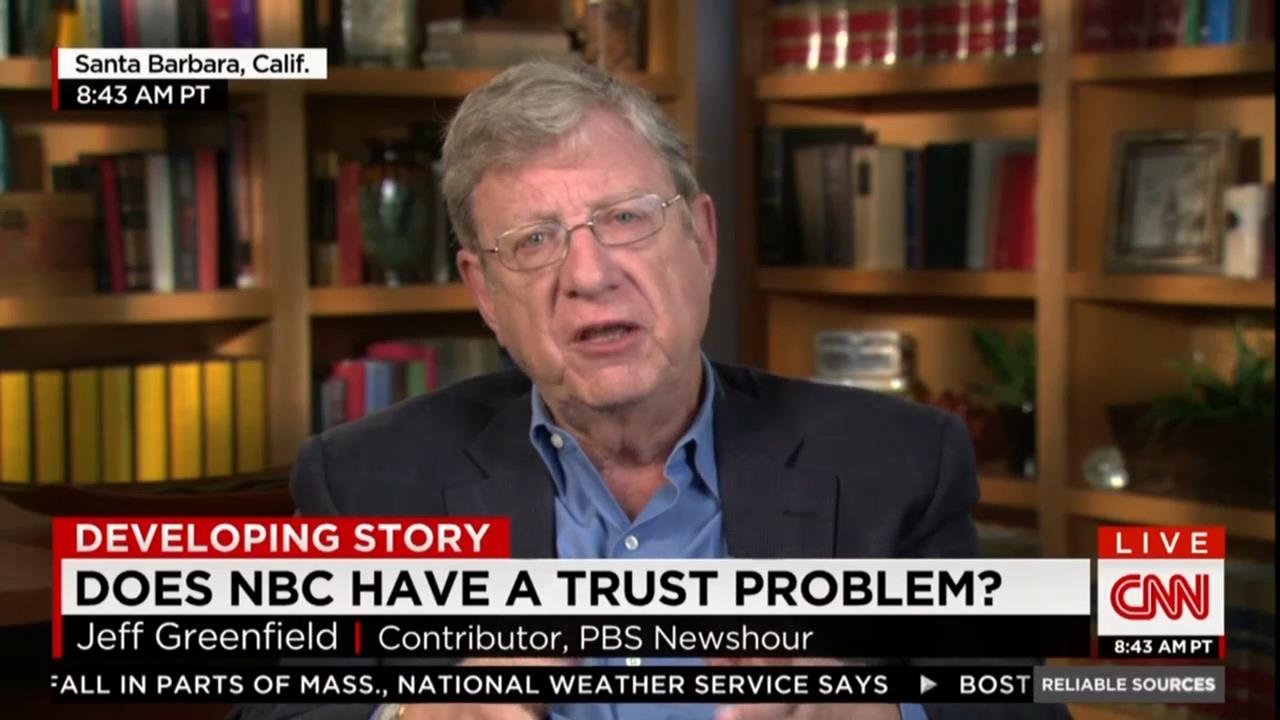 GREENFIELD: There's one other quick point I think that is worth making, and that is that one of the reasons that Brian is in trouble is, he -- this fits a familiar narrative of on outsized personality who may not be what they want us to think they are. For instance, the liberal who votes for school busing and sends his kids to private school, the war hawk with five draft deferments, the environmentalist who flies a private jet to a climate change rally, the moral -- traditional moralist who procures an abortion for his mistress.

In this sense, what I'm getting at is, it was very important for NBC to paint Brian Williams -- and this is true of a lot of people in the news business -- as someone who hasn't forgotten his roots.

STELTER: Jeff, are you calling Brian Williams a fraud?

Earlier in the segment, Greenfield insisted the media elites haven’t been protective of Williams at all. One might guess this is not an analysis of the actual press coverage – which was originally slow in coming or buried deep in the papers – and more about the tone of pundits (and perhaps media elitists talking to each other) about whether Williams Must Go.

STELTER: Jeff, do you think it's possible that Brian Williams innocently made a series of memory mistakes?

GREENFIELD: I think it's possible. But what has struck me in this whole story is that one of the beliefs of people who really are hostile to mainstream media, that the wagons get circled and the elite protect their own, boy, has that not happened. This goes to the question of, can he survive?

You see things like The New Yorker magazine, sort of ground zero of coastal liberalism, with almost savage satire on him. Maureen Dowd's column in The New York Times today has very tough things to say.

And what has struck me about this is that with a few exceptions, Dan Rather, Joe Klein of Time magazine, there has not been any notion of giving Williams the benefit of the doubt. I'm not talking about places like the New York Post, which for whom schadenfreude in something like this is a given...

GREENFIELD: ... but in the people you have talked to at the networks, legacy media, who don't seem to feel that there's any chance that there's a relatively OK explanation.

What Kimberly Dozier said -- and this is somebody who almost lost her life in combat -- it's one of the few things you hear about this -- that the general belief or the general impression given even by the elite media is this guy is a fabulist, at best. And that, I think, is what he has to overcome if he's to survive.

STELTER: You mentioned Joe Klein. Let me read from his column that he wrote a couple of days ago. He said: "I find the phenomenon of the schadenfreude circus that has erupted yet again to be overwrought and unnecessarily brutal." He went on to say: "And the judgments about whether Williams should be fired, from pundits who never saw the inside of a Chinook helicopter," he finds those self-righteous and gagging.”

Earth to Joe Klein: You don't have to see the inside of a Chinook to know Brian Williams was being a schmuck. Don't exaggerate your danger in a war zone. Period.