The journalists at CBS This Morning on Wednesday promoted as uncontroversial the idea that Andrew Jackson should be removed from the $20 bill and substituted with the likes of Planned Parenthood founder Margaret Sanger or radical environmentalist Rachel Carson. Co-host Norah O'Donnell described this as "a mission to replace Andrew Jackson on the $20 with a female American hero."

The website Womenon20s.org is championing the concept of jettisoning Jackson. It features a list of 15 nominees and, certainly, there are heroes there, including icons such as Rosa Parks and abolitionist Harriet Tubman (among others). But 8 of the 15 choices were either prominent Democratic or liberal activists. Though an on-screen graphic featured an image of Sanger, one of the "extraordinary women" according to Chip Reid, there was no mention of her organization's eventual support for abortion.

Both CBS and Womenon20s.org ignored her affiliation and affinity for the racist Ku Klux Klan. In January, The American Spectator explained of Sanger: 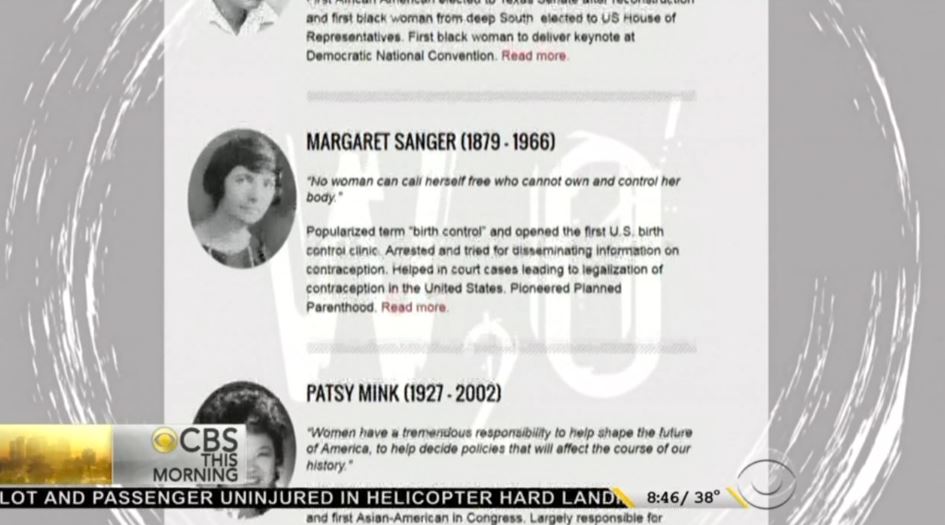 There, on pages 366 and 367, Sanger began by immediately justifying her acceptance of the invitation: “Always to me any aroused group was a good group, and therefore I accepted an invitation to talk to the women’s branch of the Ku Klux Klan at Silver Lake, New Jersey.”

Progressives today dare not raise the alarming specter of Sanger’s “Negro Project,” or her correspondence with Dr. Clarence Gamble, one of her Negro Project collaborators. In a remarkable December 10, 1939 letter today held in the Sanger archives at Smith College (I have a photocopy), Sanger urged Gamble: “We do not want word to go out that we want to exterminate the Negro population.” 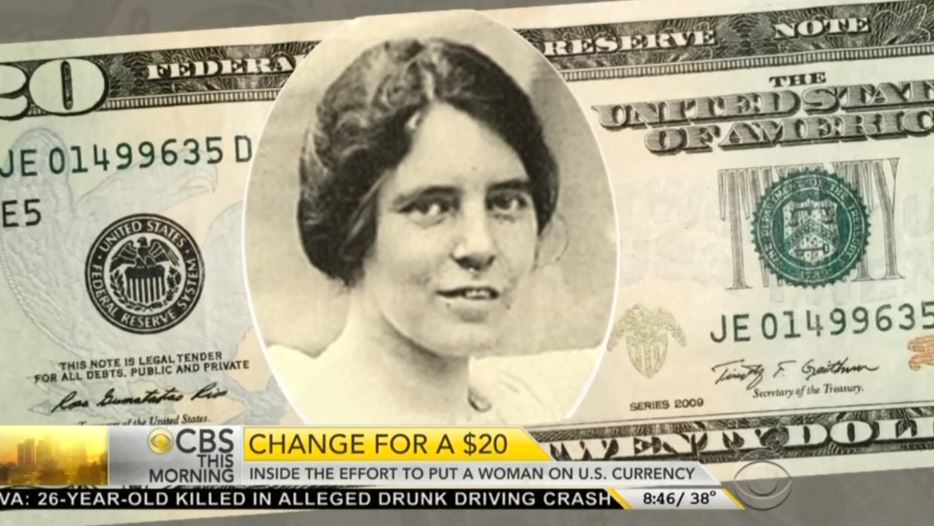 Excluded from consideration were pioneering women such as Abigail Adams, Amelia Earhart and Shirley Jackson, the former head of the United States Nuclear Regulatory Commission and the first African American female to earn a doctorate from M.I.T.

Of course, women such as conservative icon Phyllis Schlafly weren't considered worthy candidates. Reid enthused, "When they narrow it down to run, [founder Barbara Ortiz] Howard says they'll ask President Obama to order the Treasury Department to create a new $20."

Environmentalist Rachel Carson was nominated by the website. Carson's errors and false assertions about DDT led to the death of millions of lives in Africa. Also included in the list of suggested women for the $20 was feminist Betty Friedan.

None of this seemed controversial to CBS in reporting on the campaign. (The network also covered the story on Tuesday's Evening News.) Last week, NBC's Nightly News found it similarly uncontroversial. Certainly, honoring many of the women to contributed to the United States is a good idea. But the current campaign focuses heavily on liberal women and the reporters at CBS should have pointed this out.

A transcript of the March 25 segment is below: 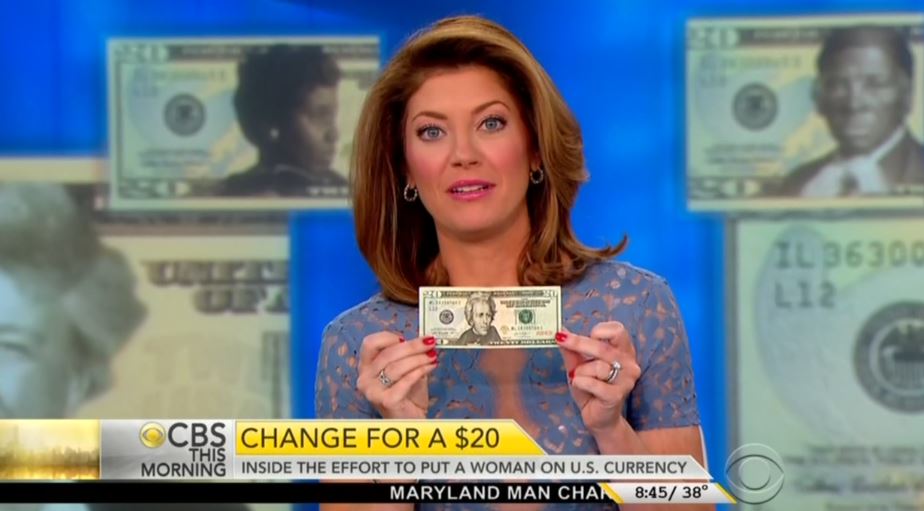 NORAH O'DONNELL: Have you heard? There's a growing movement this morning to give the $20 bill a facelift. It's a mission to replace Andrew Jackson on the $20 with a female American hero. And Chip Reid is outside the Treasury Department with the make over momentum for our money. Chip, good morning to you.

CHIP REID: Well, good morning. We talked to a founder of the small private organization that is leading the charge to put a female face on American cash.

BARBARA ORTIZ HOWARD: One day, it did occur to me that there were no women on the money and I thought, "Gee, this is a crazy omission."

REID: Barbara Ortiz Howard runs a company that maintains apartment buildings near New York City. But the last couple of years, she's been on a mission to send Andrew Jackson packing and put a woman on the $20 bill. The website Womenon20s.org allows people to vote for their favorite candidates.

HOWARD: When we see something that we are not really in tune with any longer, we want to change that about ourselves and this is a great opportunity to do that.

REID: She and some friends came up with a list of 15 extraordinary women, including Rosa Parks, Susan B. Anthony and Clara Barton. Do you have a favorite?

HOWARD: I have 15 favorites, in fact.

REID: She won't say on the record, but she clearly has a soft spot for Harriet Tubman, who rescued slaves on the underground railroad.

REID: Gets you emotional.

HOWARD: Yeah. I mean, people put themselves so out there.

REID: The initiative has some star power behind it. Susan Sarandon tweeted her support and urged others to vote and tweet their support too.

YOUNG BOY: It's crazy that there are no girls on the money.

REID: There's also a video of kids using their persuasive powers to get out the vote.

YOUNG BOY: Girls are just as important as boys. Oh, my gosh!

REID: When they narrow it down to run, Howard says they'll ask President Obama to order the Treasury Department to create a new $20. Just last year, the President said he got a letter from a young girl asking him to put a woman on U.S. currency.

BARACK OBAMA: She gave me, like, a long list of possible women to put on our dollar bills and quarters and stuff, which I thought was a pretty good idea.

DORIS KEARNS GOODWIN: My personal choice would be Eleanor Roosevelt.

GOODWIN: He didn't like banks anyway. I don't know that he would have liked to be on a bill, because he was the one who fought the National Bank.

REID: Do you think this is a long shot?

HOWARD: No, I don't think it's a long shot, because it is something that is so natural. We're so many women. It's like 50 percent of the population is women. Where are the women? We need to be on the money.

REID: The goal is to start phasing out this $20. Sorry, Andrew. And start circulating a new, more feminine $20 by the year 2020. That will be the 100th anniversary of the 19th Amendment to the Constitution, which gave women the right to vote.

GAYLE KING: We like this idea, Chip Reid. A lot, a lot, a lot. Also on the list, Eleanor Roosevelt, which I like. Doris Kearns Goodwin suggestion. Betty Friedan. Clara Barton is a good one. Harriet Tubman, Rosa Parks. There's a lot to choose from.  Wouldn't this be a nice thing, Norah?

O'DONNELL: I think it would be a fabulous. I wonder whether it's really going to happen.

KING: I think there's a shot.