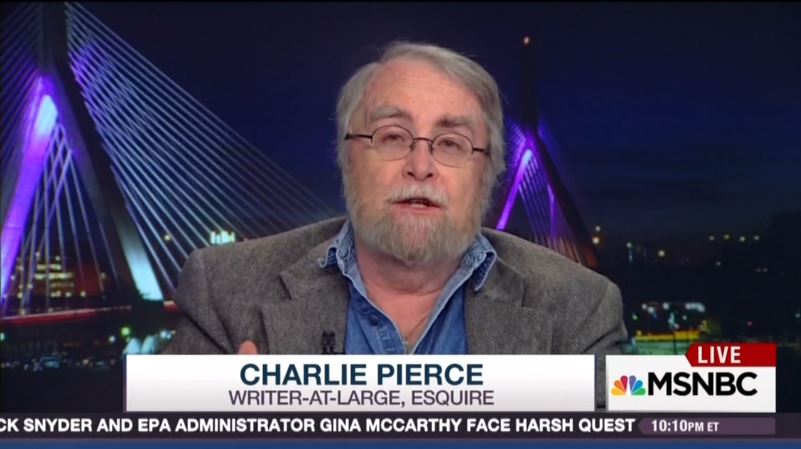 Esquire’s Charles Pierce readily concedes that Ben Carson (“an elite neurosurgeon”) and Mike Pompeo (“graduated at the top of his class at West Point”) are smart guys. In a way, though, they’re also tragic figures, he suggests, since they’ve “had to tailor their politics and their public personae to cater to the anti-rational, theocratic, anti-intellectual Id of modern conservatism…This means that both Carson and Pompeo have long histories of saying and writing things that sound like transmissions coming through their molars from Planet X.”

The pegs for Pierce’s Thursday piece were that day’s Senate committee hearings for Carson (the nominee for Secretary of Housing and Urban Development) and Pompeo (for CIA director) at which they, in Pierce’s skewed paraphrase, distanced themselves from the “nutty stuff” they’ve said and pledged that, if confirmed, they “will try to ignore the interplanetary signals as best [they] can.”

Pierce led into Pompeo’s 2015 comments about jihadism -- "This evil is all around us" -- and politics in general, which he called "a never-ending struggle…until the rapture," by alleging that Pompeo “more than occasionally has fallen out of the crazy tree and hit every branch on his way to the ground.” After the quoted material, Pierce sniped, “I'm certainly comforted by the fact that our country's spooks are going to be supervised by a guy who believes that he's going to get wafted up to glory prior to the day that Jesus comes back and starts disemboweling people in the Middle East.”

The Collected Works of Ben Carson, who never has been elected to anything and is, therefore, a complete creature of the extremist right, are even fuller of chewy, wingnutty goodness…

Ben Carson is a religious extremist. He has been one his entire career, and he has prospered outside of his area of expertise because the establishment institutions of modern conservatism have made being a religious extremist a profitable career choice. And now both of these men are being proposed as people who can lead their respective departments of government on behalf of all the people. This has required them to look either disingenuous or ridiculous in their performance before the Senate committees. There was no third choice for them.