Lefty Pundits on Giuliani: ‘Unhinged…He's Lost His Balance and Maybe His Mind’ 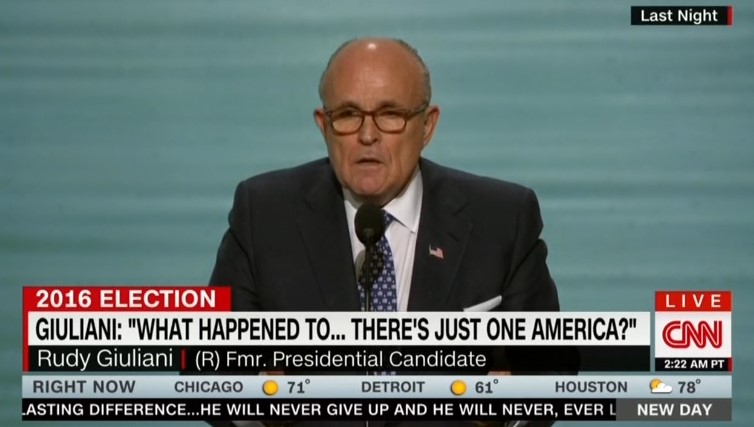 -- Talking Points Memo editor and publisher Josh Marshall remarked that “ever since the late and great Molly Ivins quipped that she thought Pat Buchanan's speech at the 1992 GOP convention sounded better in the original German it's been sort of a parlor trick to compare a 'hot' Republican speech to one from this or that fascist dictator. But this speech was really febrile and unhinged…The wild hand gestures, frequent screaming, the agitated and febrile manner. It…brought together all the themes of violence, death, betrayal and rage that shaped the evening…It's like Giuliani has spent the last fifteen years living together with 9/11 in a two bedroom apartment of his mind…He's lost his balance and maybe his mind.”

-- Fred Kaplan of Slate claimed that Giuliani “spew[ed]…rank nonsense” and “delved into the shallowest realm of Trump’s attack on Obama’s (or Obama-Clinton’s) counterterrorism policies—the refusal to call our enemy by their name: as he bellowed it, 'Islamic extremist terrorism' (words that drew an enormous ovation). Obama has addressed this critique: It is silly to believe that, if only he uttered those three words (like 'Beetlejuice, Beetlejuice, Beetlejuice!'), the bad guys would turn and run—or anything different would happen whatsoever.”

-- Esquire’s Charles Pierce offered some unsubtle analogies to Mussolini, alleging that Giuliani “bellowed like a man in search of a balcony, or a man in search of a Thorazine the size of a manhole cover…Giuliani did everything Monday night except guarantee that the trains would run on time.”

-- Matthew Yglesias of Vox opined that Giuliani, if nothing else, boosted his speech fee:

Tonight, Giuliani found a welcome home in the new Republican Party that Trump has forged and laid the groundwork for a renaissance as an in-demand angry yelling man on the conservative speaking circuit.