Slate’s Dahlia Lithwick: Trump’s Attacks On Curiel Part of the GOP’s ‘War On the Judiciary’ 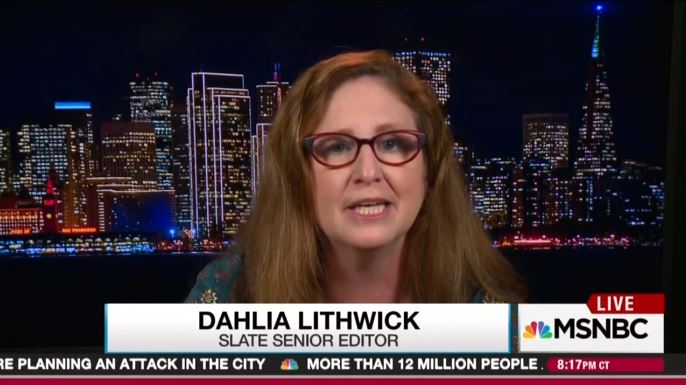 Conservative Paul Ryan and liberal Dahlia Lithwick agree that Donald Trump’s recent digs at Gonzalo Curiel were racist, but disagree about their significance. Ryan considers the attacks peculiar to Trump, while Slate writer Lithwick sees them as of a piece with the Republican party’s “wider assault on the judiciary in the Obama era.”

“The same GOP leadership calling Trump out as inappropriate today have been pulling modified versions of this stunt for years,” argued Lithwick in a Monday article. “Consider for a moment Senate Republicans’ continued refusal to confirm Obama nominees for the lower courts. The vacancy rates at federal trial courts are now nearly double those at this point in George W. Bush’s presidency.”

Lithwick then posed a stretchy rhetorical question: “Do Trump’s smears of Judge Curiel differ all that greatly from Senate Republicans’ refusal to even hold a hearing for Merrick Garland…? Sure, nobody on the Senate Judiciary Committee is calling Garland a biased Mexican. But the baseless, one-sided campaign to discredit a respected federal judge they once praised as moderate and well-qualified is just as damaging as Trump’s personal vindictiveness.” She added that Trump’s “race-based attacks on Curiel sound awfully familiar to those of us who remember the attacks on Justice Sonia Sotomayor at her confirmation hearings.”

“Don’t believe that Trump’s ideas about suppressing, belittling, and controlling federal judges are unique,” concluded Lithwick. “He differs in the racist rhetoric he uses and the depths he is willing to go to, but he’s part of the ongoing war on the judiciary itself that is waged every single day by Senate Republicans.”