Time: Trump's Cabinet 'Wrecking Crew' Is 'Dismantling Government As We Know It'

The most recent cover of Time Magazine — or I should say what's left of it, given its parent company's recent decision "reducing ... circulation and frequency" of the formerly iconic publication — calls President Donald Trump's cabinet "The Wrecking Crew" on a mission of "dismantling government as we know it."

The cover's word selection is obviously out of line, as none of the three is proposing to "dismantle" — meaning to "take (something) apart" (and not put it back together) — the agencies under their charge. The headlined addition of "as we know it" doesn't change that. But it does feed leftist paranoia, which is apparently the point.

Of course, none of Time's four articles pointed out that "government as we know it" has gone from spending just over $2 trillion per year to just shy of $4 trillion in the past 20 years. After taking inflation into account, that's a 41 percent increase in real terms. Today's "government as we know it" doesn't accomplish much more than it did 20 years ago — unless getting in the way of progress is considered an accomplishment. 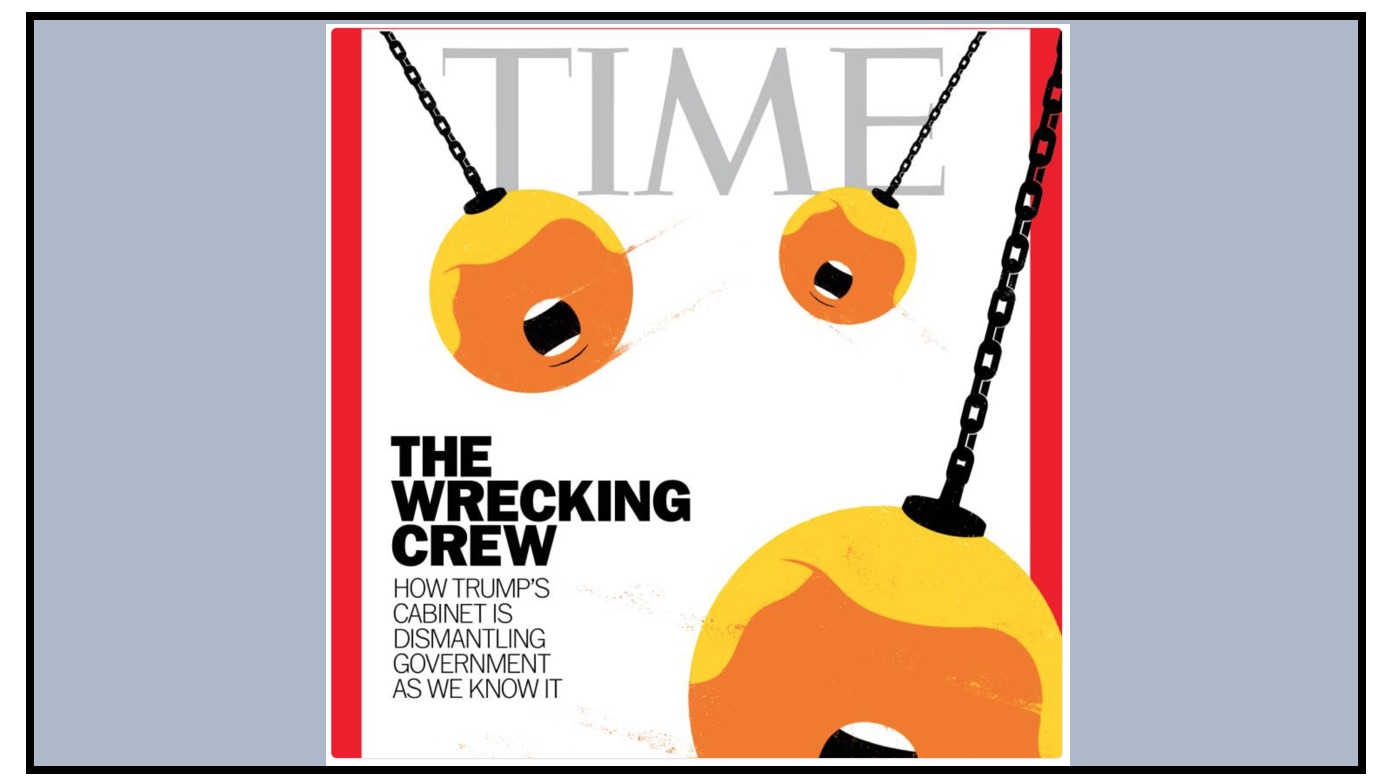 That didn't stop Deputy Washington Bureau Chief and Senior Correspondent Massimo Calabresi from claiming a "dismantling" again in his opening content. Rather than cite recent related statements by Trump, likely because he couldn't find any that were sufficiently inflammatory, Calabresi obsessed over Steve Bannon. Bannon was fired two months ago (the link is to Time's report on the firing), largely because he seemed to relish making outlandish claims, using terms like "deconstruction," about the scope of Team Trump's efforts.

Calabresi cited the departed Bannon's description of "deconstruction" in his opening paragraph as his basis for then trying to move readers' fright meter into the red (bolds are mine throughout this post):

While Trump Is Tweeting, These 3 People Are Undoing American Government as We Know It

... For most of the year since Trump's stunning election win, his pronouncements have commanded the public's attention the way an unexpected announcement does on a long plane ride. But on the ground, things have been happening. Quietly, the Administration has taken thousands of actions, affecting everyone from the poorest day laborer to the richest investment banker. And it's touting its work. "No President or Administration has deregulated or withdrawn as many anticipated regulatory actions as this one in this short amount of time," says White House communications director Hope Hicks.

Two major moves have enabled the Trump administration to begin to get a grip on regulations — but it's only a beginning, as we'll see shortly.

One is Trump's decision to dust off the Congressional Review Act, a 1996 law passed while Newt Gingrich was House Speaker and Bob Dole was Senate Majority Leader. It went into force with Democratic President Bill Clinton's signature. The CRA initially gave the Trump administration the ability to review and withdraw "rules adopted as far back as June 3, 2016" — and many were indeed withdrawn. Frequently utilizing this law made particular sense because the Obama administration had gone into regulatory overdrive during its final months.

The other major contributor to the halt in the expansion of regulatory overreach has been Trump's January 30 Executive Order telling agencies that "for every one new regulation issued, at least two prior regulations (are to) be identified for elimination."

For all the ginned-up outrage on the left and all of the administration's back-patting, the following sentence in a complimentary item at Ben Shapiro's Daily Wire tells us that Trump has only stopped the net increase in regulations, which is obviously a far cry from "dismantling":

In other words, Trump has to this point only stopped the monster from growing bigger.

Contradicting the alarmism on its cover and in Calabresi's introduction, two of Time's three items on specific Cabinet officials were relatively complimentary.

With DeVos, Stuart Taylor Jr. wrote about "What Betsy DeVos Gets Right About Campus Sexual Assault."

In early September, DeVos spoke out against 2011 Obama-era regulations which weakened normal due-process protections for college students accused of sexual assault. As Taylor described it, those regs "weakened traditional protections for the accused, like presumption of innocence and the right to cross-examine an accuser." In her speech, DeVos decried them as "shameful ... un-American, and ... (an) anathema to the system of self-governance to which our Founders pledged their lives over 240 years ago."

Despite many knee-jerk outcries after that speech, Taylor noted, with apparent wonder:

Less predictable was the support DeVos received from other, traditionally liberal quarters. She won cautious applause from the editorial boards of the Washington Post, the Boston Globe and USA Today. Even more surprising, she is making common cause with some respected feminist law professors, major organizations of lawyers and even California Governor Jerry Brown, a progressive Democrat. On Oct. 15, Brown vetoed a bill designed to perpetuate the Obama regulations in his state, citing some "colleges' failure to uphold due process for accused students."

Tessa Berenson's item on Ben Carson and HUD actually gave sympathy to common-sense, center-right themes which are important to Carson:

How can the government help people in need by propping them up without becoming a crutch?

... the real goal of the agency, Carson argues, has to be for people to no longer need its help at all.

Virtually all of Time's venom was found in Justin Worland's item on Pruitt. Examples include the following:

... the sharp turn at the EPA and Pruitt's close ties to the industry have raised questions about whose interests the agency is protecting.

... the change has also weakened an agency designed to save lives.

... In Pruitt's view, protecting the environment is just one element of his job as the country's chief environmental regulator, on par with promoting the economy. (Heaven forbid.)

... Schedules released in response to open record requests show that his calendar has been crammed with meetings with industry executives, from the president of Shell Oil Co. to Bob Murray, the Ohio coal baron. (You're no longer economic royalty if your company has been flirting with bankruptcy for over a year.)

... In most cases, Pruitt does not argue that regulations have no benefits. Instead, he attacks them as inconsistent with the letter of the law and argues that the economic costs outweigh the benefits. (Imagine that.)

In his wrap, Worland screeched that "The chemicals and pollutants spilling into our air and water will not just disappear when a new EPA chief comes to town." The truth is their reduction will continue, as they have for at least the past 50 years.

So at the end of the day, Time's "Wrecking Crew" alarmism about "dismantling" and "deconstruction" is bogus. But management must think it will sell magazines, even though biased far-left reporting is what has caused its ongoing shrinkage.