Reporter-turned-columnist Timothy Egan at the New York Times is so enamored of the mythology surrounding Barack Obama that he claimed in a Friday column that the 44th President's rhetoric "was the best American music" which "celebrated" a United States where, in Egan's words, "people from all races, ideologies and religious sects would check their hatreds at the door after becoming citizens." 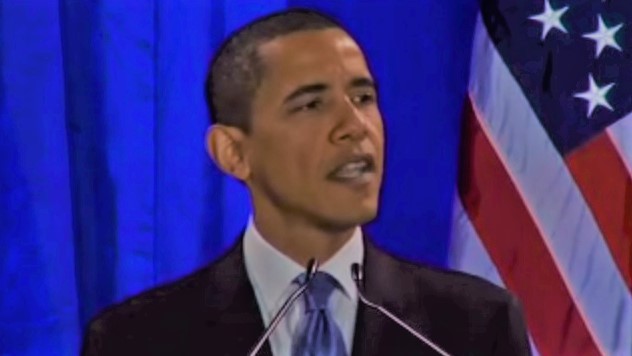 Egan based his fantasy-driven view of Obama's rhetoric and legacy on four quotes from just one 2008 speech, which then, in his mind, gave the Times columnist free rein to pretend that the nation's current identity-driven divisions are all due to current President Donald Trump.

It's telling that to make his flawed case, Egan's column solely referred to Obama's words from a single speech which is now over 9-1/2 years old, delivered 10 months before he was first inaugurated.

Here is the first of four quotes Egan used from that speech (bolds are mine throughout this post):

(Trump) has shattered the idea, eloquently expressed by President Barack Obama, that we are not "irrevocably bound to a tragic past."

Obama hastily-planned March 18, 2008 speech at the National Constitution Center in Philadelphia took place only because the controversy surrounding his longtime membership in Chicago's Trinity United Church of Christ (TUCC), whose pastor at the time was the overtly racist Rev. Jeremiah Wright, was threatening to derail his candidacy.

Shortly after that speech, McClatchy's Margaret Talev reported the truth (also noted at NewsBusters) about TUCC's religious outlook. Talev's analysis really is worth a full reading for those who need an historical refresher, but here are a few key points:

... Jesus is black. Merging Marxism with Christian Gospel may show the way to a better tomorrow. The white church in America is the Antichrist because it supported slavery and segregation.

Those are some of the more provocative doctrines that animate the theology at the core of Trinity United Church of Christ in Chicago, Barack Obama's church.

... But in repudiating and putting in context Wright's inflammatory lines about whites and U.S. foreign policy, the Democratic presidential front-runner didn't address other potentially controversial facts about his church and its ties.

... It isn't clear where Obama's beliefs and the church's diverge.

Wright perfectly demonstrated his warped world view in his "God d**n America" sermon in 2003. A video containing only that statement is here; a longer excerpt is here.

So Obama and his family attended a church dedicated to division, grievance, and even slavery reparations for nearly two decades. He then hoped that the establishment press would lionize the speech, while doing all it could to ignore his past and keep it away from people who several years later would be characterized as "low-information voters." The cynical strategy worked.

Even if they don't know the detailed history, millions of Americans now know that Obama's pose as a uniter was a ruse. It was brazenly aided and abetted by a press corps which desperately wanted to see Obama win the presidency (in the process betraying Hillary Clinton's 2008 candidacy). Obama's supposed dedication to unity, a pose which began with his 2004 Democratic Convention speech, began to significantly dissipate well before his 2008 president campaign ended, and, as we will see later, completely disappeared by mid-2012. Even Egan observed that "About eight million citizens voted for President Obama — twice — and then flipped their vote for Trump." That's because they saw through the outgoing president's "uniter" scam, and recognized that Hillary Clinton, if elected, would perpetuate the divisiveness and ramp it up further.

Here are the next two quotes Egan used from that March 2008 speech:

What they heard from Obama was the best American music. “In no other country is my story even possible,” he said in his 2008 speech on race. After noting that he won some of the whitest counties in the country, he criticized a view “that sees white racism as endemic, and that elevates what is wrong with America above what we know is right with America.”

Perhaps recognizing that using four quotes from one speech isn't exactly convincing evidence of a lifelong commitment to national unity, Egan structured the second sentence in this paragraph in a way that will give some readers the impression that its quote came from a much later address after Obama was first elected.

It didn't. Obama was only referring to his "commanding victories in states with some of the whitest populations in the country  during Democratic primaries — as if getting more votes from fever-swamp Democratic Party voters in those contests than the deeply flawed Hillary Clinton proves anything about his ability to unify the entire country. We now know, based on his eight-year tenure, that it clearly didn't.

Egan's fourth quote from that speech is not exactly what Obama said:

To dismiss white concern over busing or affirmative action as racist “only widens the racial divide and increases misunderstanding,” he said.

As seen both in the transcript and in the speech's video, this is what Obama said:

... to wish away the resentments of white Americans, to label them as misguided or even racist, without recognizing they are grounded in legitimate concerns - this too widens the racial divide, and blocks the path to understanding.

Egan replaced "this too" with "only," and erroneously kept the word within the quote. "Increases" — the word Egan put into the quote to replace "blocks the path to" — is not present anywhere in the speech's transcript. It would appear that the Times should consider bringing back those laid-off and early-retired copy editors.

The "Obama as uniter" scam was so obvious by May 2012 that Matt Negrin at the ordinarily Obama-worshipping ABC News pronounced it dead, and recognized that it began dying even before his 2008 presidential win:

In Memoriam: The Old Obama, Who Wanted to Bring People Together

The 2004 version of Barack Obama, who captured the nation with a dazzling speech about unity and went on to win the presidency on a message of hope, died on Monday. He was 8 years old.

... Obama's illness got the best of him late Monday, as he announced that his campaign for four more years in the White House would be based not on optimism, but rather the shady corporate record of his opponent, Mitt Romney, who ran a private-equity firm that few Americans knew about before this year.

... Obama's admission was in some ways the completion of a metamorphosis that began even during the 2008 campaign, as it became likely that he would be elected.

This news apparently hasn't yet arrived at Egan's desk or made its way to his computer. Instead, the Times columnist pretended that Donald Trump invented divisiveness and identity politics:

We are retreating to our tribal, ethnic and primitively prejudicial quarters. Everything is about race and identity. We come from privilege, or oppression. We choose politicians based on whether they help our tribe or hurt People Like Us.

This is President Trump’s legacy.

No, Tim. The idea that deliberately dividing the American people began with Trump is complete horse manure, and the left completely owns the obsession with "race and identity."

A complete, thorough, fair-minded review of Obama's and his administration's statements and actions during his presidency demonstrates that he left a legacy of a "weaker and more divided America."

Additionally, Trump's "divisiveness," though often not helpful, is nonetheless successfully exposing the people who are on the brink of dominating leftist politics as violence-prone, unhinged, and out of touch with the concerns of average Americans.