The latest installment in leftist excuse-making when socialism fails goes into the "It would work if leaders just had the right people handling things" file.

It comes in the form of a Friday morning "analysis" at the Associated Press. Writers Jorge Rueda and Joshua Goodman want readers to believe that the economy in the Bolivarian socialist and once fairly prosperous nation of Venezuela would be in much better shape today if the military didn't botch the responsibilities de facto dictator Nicolas Maduro had previously given it to handle the nation's "battle against widespread food shortages." Now the AP pair believe it will get even worse, because the military has essentially been given total control in this area.

Sorry, guys. It will get even worse because the Maduro government continues to expand the scope of the socialist policies which have already brought Venezuela's economy to its knees.

Here are selected paragraphs from the AP's "we have to find something to blame besides the noble project of socialism" attempt. The final three bolded items below are the ones which best explain the current situation: 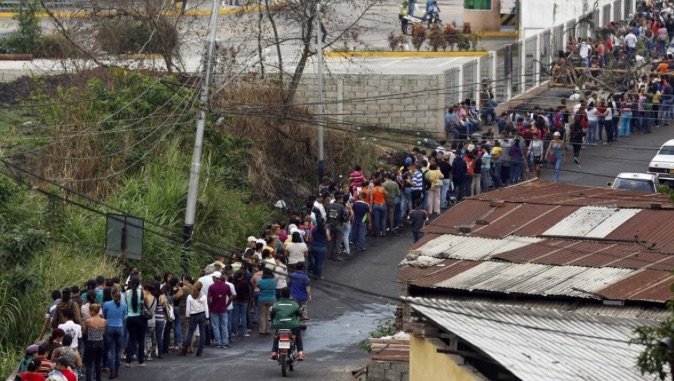 President Nicolas Maduro's announcement this week that the military will lead the battle against widespread food shortages overlooks one key fact: The armed forces have played a big role in Venezuela's economic mess.

Since Maduro took office in 2013, he has named a number of active and retired generals to run the economy. All five of his food ministers who manage one of the government's largest budgets have come from the armed forces. And they in turn have placed dozens of their military cohorts to lead everything from a state-run chain of supermarkets to an agency overseeing food imports.

None of those moves, however, can match the scope of Maduro's promotion this week of Defense Minister Vladimir Padrino to head what is called the Great Mission of Sovereign Supply.

The goal is to boost production and guarantee the smooth distribution of food in the face of what Maduro sees as economic sabotage by his opponents. As part of the overhaul, all ministries will take orders from Padrino, and the nation's ports will fall under the "total control" of the military.

That has led some to compare the move to a discreet power grab by the armed forces, the historical arbiter of Venezuela's political disputes.

... The doubling-down on the armed forces would appear to make political sense for Maduro, who lacks the military background of his predecessor and mentor, the late Hugo Chavez. With Maduro's popularity low amid daily food riots and an opposition push to recall him from office, it's vital for him to have the loyalty of the armed forces, which put down a wave of anti-government protests in 2014.

But leaning on the military is unlikely to yield the economic miracle Venezuela desperately needs — at least judging by its record so far.

... When the opposition won control of the legislature in a landslide in December, Padrino — surrounded by the military command — appeared on TV to congratulate Venezuelans for peacefully fulfilling their civic duty. For some opponents, that was a cryptic sign that he isn't wedded unconditionally to Maduro's socialist project.

... "They've given the military total power to fix a problem they helped create and for which there's no solution," said Fernando Antich, a retired general and former defense minister in the pre-Chavez era. "The only result is they'll now share responsibility for the failure."

As the final three bolded items note, Maduro's gambit drags the military into his corner, and in public perception will make its members as responsible as he is for the nation's woes. So his move is an attempt to get insurance against a coup for his failed "socialist project" (what a bizarre term that is; it's as if the Venezuelan people are Maduro's lab rats).

The AP writers completely fail to understand that the military's job isn't to grow crops, get food to market, or find the money to buy food to import. That was formerly handled reasonably well by the Venezuela's private sector and pre-Hugo Chavez governments. The private sector has since collapsed because of government seizures of land, agribusinesses and supermarkets, price controls and intimidation. Rampant inflation accompanied by those price controls have made it uneconomical for farmers to farm, and, more broadly, for workers to work. As the AP reported earlier this week in an unusually well-done but lengthy Tuesday morning dispatch which was then cut by 80 percent during the rest of the day to remove the most damning material, "fields lie fallow while farmers spend their days waiting to buy imported goods" in hours-long-lines. Military control of farming won't change any of this.

The military can't create plenty out of virtually nothing, and the reason there's virtually nothing is that Maduro's socialist government has taken over the entire enterprise in the process of ruining Venezuela's economy.

Venezuela's devolution into a super-sized and potentially far worse version of Cuba continues. The Venezuelan people, almost 90 percent of whom "say they do not have money to buy enough food," are now enduring a government-created famine, as the world mostly stands by — partly because press exposure of the dire circumstances has been so light, and partly because even when the press deigns to expose it, it makes excuses for a form of government which has, once again, utterly failed..