In a Thursday morning column at Salon.com, leftist and longtime social critic Camille Paglia found it amusing that the New York Times thought that its supposedly major exposé about "a boastful, millionaire New Yorker (who) liked the company of beautiful women" was going to be considered big, game-changing news.

In Paglia's view, the fact that the people at the Times believed they had something newsworthy in light of, in her words, the "long record of crude groping and grosser assaults" committed by Democratic frontrunner Hillary Clinton's husband Bill, demonstrates "why NYT can't lay a glove on Trump."

Paglia, who is no fan of a possible Donald Trump presidency, took her primary shots at the hit piece's authors. But I think the real problem here is that the paper's editors failed to acknowledge how weak their story was. They should have killed it, but they didn't, and for the same reason the authors felt they actually had something, namely what Paglia calls "the rote political correctness that has saturated elite American campuses for nearly 40 years."

Here's Paglia's take (bolds are mine):

Zap! If momentum were a surge of electromagnetic energy, Donald Trump against all odds has it now. The appalled GOP voters he is losing seem overwhelmed in number by independents and crossover Democrats increasingly attracted by his bumptious, raucous, smash-the-cucumber-frames style. While it’s both riveting and exhilarating to watch a fossilized American political party being blown up and remade, it’s also highly worrisome that a man with no prior political experience and little perceptible patience for serious study seems on a fast track to the White House. ...

... The drums had been beating for weeks about a major New York Times expose in the works that would demolish Trump once and for all by revealing his sordid lifetime of misogyny. ... On Monday, after seeing countless exultant references to this virtuoso takedown, I finally read the article—and laughed out loud throughout. Can there be any finer demonstration of the insularity and mediocrity of today’s Manhattan prestige media? Wow, millionaire workaholic Donald Trump chased young, beautiful, willing women and liked to boast about it. Jail him now! Meanwhile, the New York Times remains mute about Bill Clinton’s long record of crude groping and grosser assaults—not one example of which could be found to taint Trump. 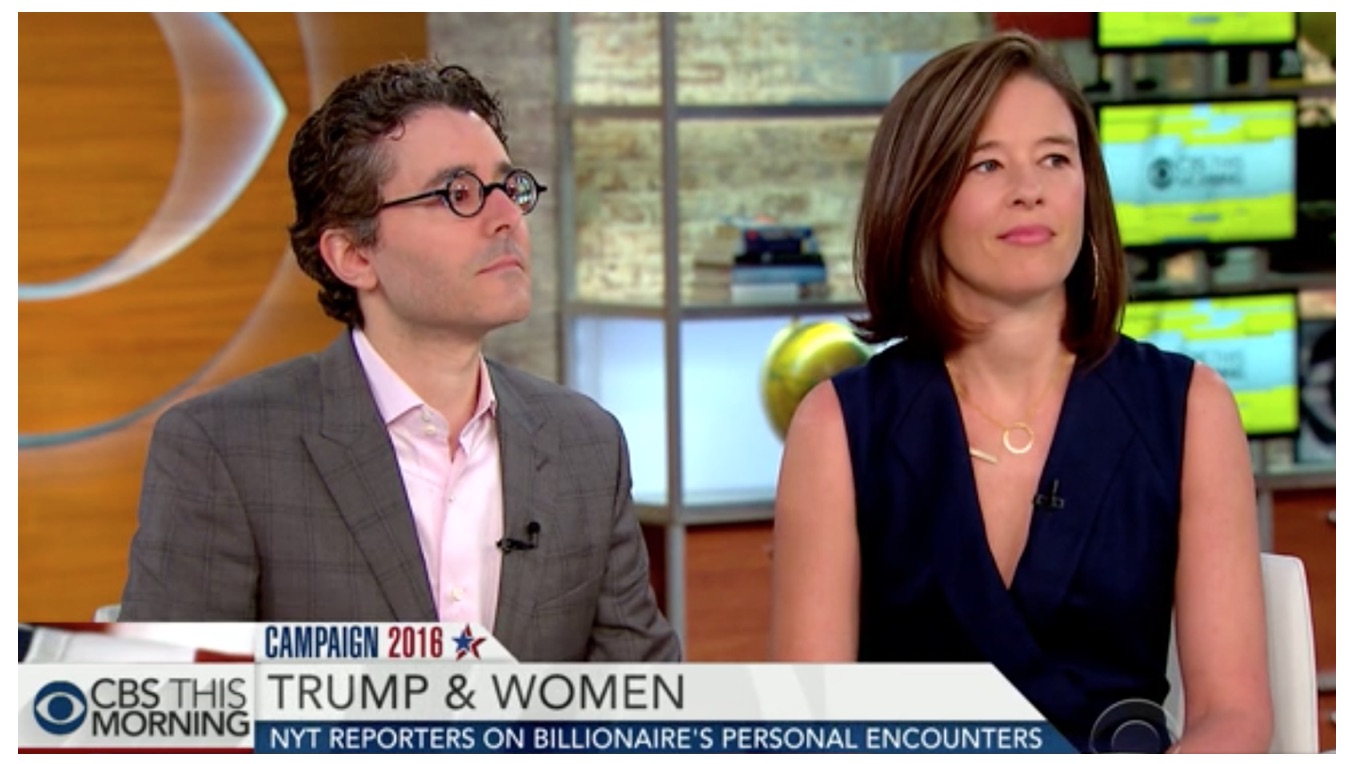 Blame for this fiasco falls squarely upon the New York Times editors who delegated to two far too young journalists, Michael Barbaro and Megan Twohey, the complex task of probing the glitzy, exhibitionistic world of late-twentieth-century beauty pageants, gambling casinos, strip clubs, and luxury resorts. Neither Barbaro, a 2002 graduate of Yale, nor Twohey, a 1998 graduate of Georgetown University, had any frame of reference for sexual analysis aside from the rote political correctness that has saturated elite American campuses for nearly 40 years. Their prim, priggish formulations in this awkwardly disconnected article demonstrate the embarrassing lack of sophistication that passes for theoretical expertise among their over-paid and under-educated professors.

... Twohey, with her snippy, bright and shiny careerism, took a page from the slippery Hillary playbook in the way she blatheringly evaded any direct answer to a pointed question about how Rowanne Brewer Lane’s pleasantly flirtatious first meeting with Trump at a crowded 1990 pool party at Mar-a-Lago ended up being called “a debasing face-to-face encounter” in the Times. The hidden agenda of advocacy journalism has rarely been caught so red-handed.

As noted earlier, though, editors at the Times should have realized that their pair of reporters had unearthed nothing meaningful, and that their double standard relating to Hillary Clinton's husband's behavior would be made so obvious that perceptive liberals like Paglia, who supports Bernie Sanders, would call them out.

Even worse for the paper's pet causes, which are electing Democratic Party presidents and pushing them as far to the left as they possibly can once elected, editors at the Times should have realized that the story's publication would cause the ever-opportunistic, never-shy Trump to bring up the R-word — rape — in Bill Clinton's past. Team Hillary had to be hoping that the Juanita Broaddrick story would remain suppressed from general circulation until Election Day. Oops. Oh, and Broaddrick is now trying even harder to keep her story alive.

So now look what the New York Times has done. Hillary Clinton is falling further behind Trump in the polls. Her and her campaign's actions are betraying that they have serious concerns about closing the deal. Threatened by the Sanders-supporting energy on her left, Mrs. Clinton is blubbering about how, according to the Hill, "there's 'no way' she won't be the party's presidential nominee," even as her Alinsky-following acolytes hysterically try to lecture the Vermont senator's true believers on, of all things, civility. And this is even before considering the possibly damning results of that pesky FBI criminal investigation and related civil actions.

Hillary Clinton's statement to CNN's Chris Cuomo, reported at the Hill, that "I will be the nominee for my party, Chris. That is already done in effect" — before she has clinched the nomination, with several primaries remaining, and as her momentum's slippage advances into its ninth week — plays right into the hands of outraged Sanders supporters who believe with growing evidential support that the Democratic Party's selection process has been rigged from the start.

As Paglia effectively pointed out, the Times is really, for all practical purposes, doing Donald Trump's bidding. From Hillary's point of view, with "friends" like these, who needs enemies?