The best way to tell when a leftist's gaffe is serious is to see if the Associated Press or the New York Times have recognized its existence. As of 9 p.m. ET this evening, neither has. So it's serious. Pile-ons are coming from the left and the right.

As the prolife movement has been saying since 1967, when the walls protecting the unborn began to be breached, the "unborn person" is today's equivalent of Jews in Germany during the Nazi era, and of slaves in pre-1865 America. Roe v. Wade is the Dred Scott decision of our time.

The abortion-obsessed left is furious that Mrs. Clinton has recognized the indisputable reality that the unborn child is a person. Bradford Richardson at the Washington Times explains the Orwellian outlook of the pro-abortion crowd — or, as much as anyone can "explain" an outlook so simultaneously incoherent and disgusting (bolds are mine): 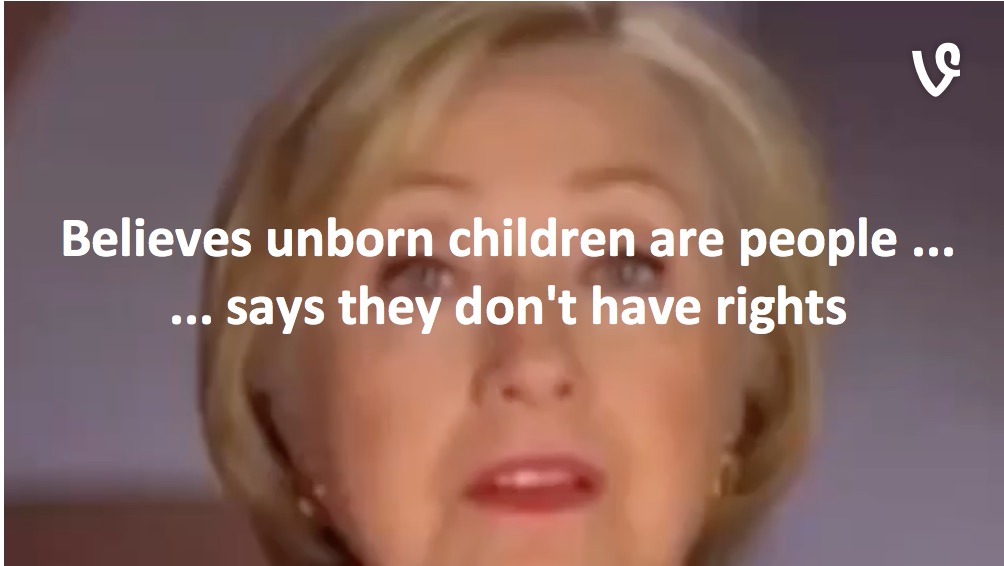 The comment "further stigmatizes #abortion," Ms. Arellano said in a tweet. "She calls a fetus an 'unborn child' & calls for later term restrictions."

Describing the fetus as a "person" or "child" has long been anathema to the pro-choice movement, which argues the terms misleadingly imply a sense of humanity.

In addition, the specific term "person" is a legal concept that includes rights and statuses that the law protects, including protection of a person's life under the laws against homicide. Pro-choice intellectuals have long said that even if an unborn child is a "life," it is not yet a "person."

Guidelines issued by the International Planned Parenthood Federation discourage pro-choice advocates from using terms such as "abort a child," instead recommending "more accurate/appropriate" alternatives such as "end a pregnancy" or "have an abortion."

"'Abort a child' is medically inaccurate, as the fetus is not yet a child," the guide reads. ...

Mrs. Clinton's gaffe in acknowledging that an unborn child is indeed a person — as seen above, it's leftist heresy  — is deserving of at least as much attention as Donald Trump's apparently infinitely flexible positions on the issue during the past week. But it's not getting any from the nation's two primary news gatekeepers. Searches on "Hillary person" (not in quotes) at the Associated Press's main national site, its "Big Story" site, and at the New York Times all came up devoid of any reference to her comment.

Pro-lifers are naturally having a field day with the idea that Mrs. Clinton, a lawyer whose name is more closely associated with abortion on demand than anyone who has ever run for president of this nation, can't even keep her politically correct language in line (direct links to tweets are here, here, here, here and here):

No wonder the AP and the New York Times haven't touched Mrs. Clinton's statement. Her contradictions are so obvious that even low-information voters who hear about may finally understand the horror this nation has enabled nationally for over 40 years. If they hold out until early Monday morning, they'll keep Mrs. Clinton's gaffe off of the Big 3 networks' morning shows. After that they'll treat is as "old news" not worthy of coverage.

(Graphic HT to Jodi McPhee Giddings, who has a Vine of Hillary's seven words at her Tweet)