As of 11 p.m. ET on Friday, according to CNN, the death toll was "at least 153" (since updated to "at least 128") who have been "killed in gunfire and blasts" in Paris in "coordinated attacks." CNN claims that "It is still not clear who is responsible." (Update: Early Saturday morning Eastern Time, ISIS claimed responsibility.)

Two days ago, leftist Democrat Hillary Clinton laughed at the idea of Republican presidential candidate Carly Fiorina being strangled. Today, we've learned that wealthy "liberal funders" are considering bankrolling the Black Lives Matter movement, whose followers have frequently been seen and heard targeting police with language like, "Pigs in a blanket, fry 'em like bacon" and "What do we want? Dead cops!" But Salon's Chauncey DeVega wants everyone to know that, after Paris, it's the right in the U.S. which needs "to tone down their incessant violent rhetoric."

DeVega's headline also seems to betray a desire to stifle attempts to identify and condemn those responsible for the murderous acts in Paris (HT Twitchy; bolds and numbered tags are mine; links are in originals):

And so the hate speech begins: Let Paris be the end of the right’s violent language toward activists
Real terror unfolds in Paris. Perhaps this will convince the right to tone down their incessant violent rhetoric 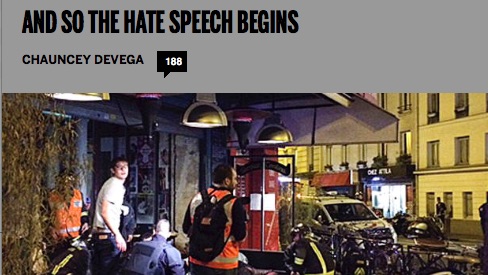 It is not a game.

In the United States, the right-wing media and movement conservatives have for decades consistently used eliminationist and other violent rhetoric to describe liberals, progressives and other people with whom they disagree. As was seen in the recent attacks on a Charleston-area black church, and other violence by right-wing anti-government militias, such rhetoric does not float in the ether of the public discourse, harmless and unacknowledged. No, it does in fact lead to action.

In recent months, the right-wing media has used language such as “terrorism” and “violent,” or that the latter is “targeting police for murder” to describe the Black Lives Matter movement. Such bombastic and ugly screeds–which are wholly unfounded, with no basis in empirical reality [1] – have also been used by right-wing opinion leaders to describe the African-American students who are fighting against racism at Yale and the University of Missouri.

... Bill O’Reilly has declared “war” on Black Lives Matter and in doing so described them as a type of contemporary Ku Klux Klan (KKK). At its height of popularity in the United States during the late 19th and early 20th centuries, the KKK was America’s largest terrorist organization. It was responsible for the murders of thousands of African-Americans. In contrast to the KKK, Black Lives Matter is a group dedicated to protecting the human rights of all people against state-sponsored violence and police thuggery and murder. [2]

Ben Carson, in his designated role as a black conservative whose primary purpose is to disparage black Americans and to excuse-make for white racism, recently told Fox News’ Megyn Kelly that the black and brown students who are advocating for their full rights and respect at Yale University are ushering in “anarchy” and “this is just raw emotion and people just being manipulated, I think in many of these cases, by outside forces who wish to create disturbances.”

Likewise, Fox News has repeatedly described the student protesters at Yale and Missouri using the same language. O’Reilly has even gone so far as to suggest that Black Lives Matter and the students who are protesting racist treatment are part of a cabal that is engaging in “fascist” behavior and “running wild” against white people. Trumping his allusions to “fascism,” on his October 22, 2015 episode of his TV show, Bill O’Reilly even made the absurd claim that Black Lives Matter is akin to the “Nazis.”

These are implicit threats and overtures to violence as racial authoritarian fascists are a clear and present danger to democracy and freedom. [3] Thus, they must be eliminated by any means necessary.

Other critics of the student activists at Yale University and Missouri such as The Atlantic’s Conor Friedersdorf have even made the absurd claim that so-called “safe spaces” are being “weaponized” by student activists in order to deny free speech. [4]

[1] — All sorts of violence has happened in areas agitated by and as a result of the activities Black Lives Matter "activists" (thoroughly catalogued through early September here). Some of them include the several episodes of rioting and violence in Ferguson, Missouri; the Baltimore riots and lootings, and the murders of two New York City police officers (the murderer cited the "pigs in a blanket" meme just before he killed them). In sum "the group’s history is a long list of riots, vandalism, looting, arson, random shootings, shootings targeting police, burned out cars, rocks and bottles thrown at cops resulting in over 100 injuries, blocked highways, death chants, and at least one bomb plot."

[2] — Black Lives Matter is no such thing. If it were, its members and followers wouldn't go ballistic and attempt to shout down and intimidate anyone daring to argue, correctly, that "all lives matter."

In the video of Tim Tai trying to carry out his ESPN assignment, I see the most vivid example yet of activists twisting the concept of “safe space” in a most confounding way. They have one lone student surrounded. They’re forcibly preventing him from exercising a civil right. At various points, they intimidate him. Ultimately, they physically push him. But all the while, they are operating on the premise, or carrying on the pretense, that he is making them unsafe.

It is as if they’ve weaponized the concept of “safe spaces.”

“I support people creating ‘safe spaces’ as a shield by exercising their freedom of association to organize themselves into mutually supporting communities,” Ken White wrote prior to this controversy. “But not everyone imagines ‘safe spaces’ like that. Some use the concept of ‘safe spaces’ as a sword, wielded to annex public spaces and demand that people within those spaces conform to their private norms.”

Yesterday, I wrote about Yale students who decided, in the name of creating a “safe space” on compass, to spit on people as they left a talk with which they disagreed. “In their muddled ideology,” I wrote, “the Yale activists had to destroy the safe space to save it.”

DeVega is basically saying that if conservatives and other sensible people who object in any way to the Black Lives Matter and current campus movements' tactics and statements don't shut up, they will be to blame for any and all violence committed by these groups, who in his twisted mind have acted as and would otherwise have continued to acted like pacifists.

One Tweeter tonight characterized Salon as "The internet media garbage can."