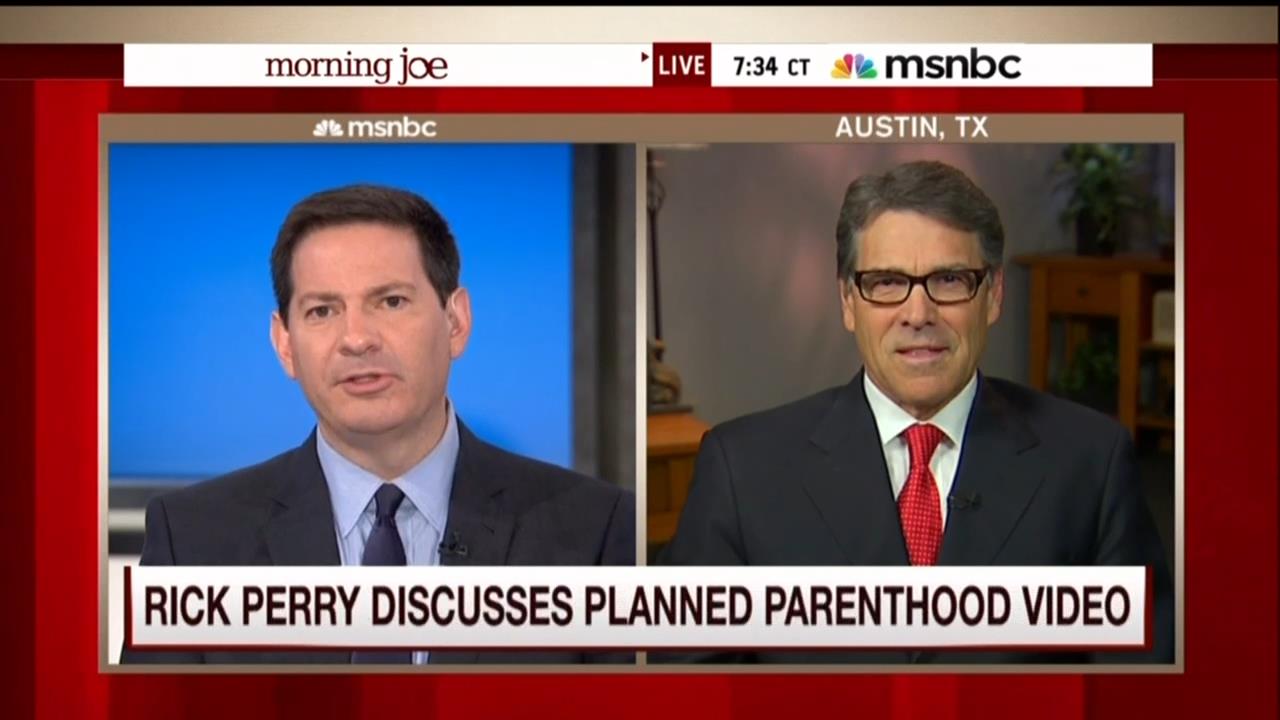 As usual, much of the press has responded to scandalous behavior by leftist sacred cows by making the story about Republicans criticizing the actions instead of the scandal itself.

On the one hand, are we really supposed to believe that only pro-lifers are horrified by the evidence that Planned Parenthood, aka Planned Parthood, sells the body parts of aborted preborn babies? Gosh, I hope not. So it's more than fair to turn the question around on anyone who tries to isolate the objections in that way. Mark Halperin at MSNBC tried that on Rick Perry, asking him, "Why are you so troubled by this video?" — as if the former Texas governor is the one with a problem.

As will be seen in the video below (HT the Washington Examiner), Perry was in no mood to make it about him:

MARK HALPERIN: Governor, I'd like to ask you a couple of questions about Planned Parenthood. There's a controversy swirling around that you've weighed in on. First, I'd like you to say, does Planned Parenthood do anything, provide any services that you think are valuable, and if so what are they, and second, why are you so troubled by this video?"

RICK PERRY: Well, Planned Parenthood does give some services which I would suggest are good for women's health, but —

HALPERIN: Which ones, Governor? Can you be specific on that?

PERRY: Oh, I think some of the cancer screenings, some of those types of screening are obviously good for women's health. But when you look at the overall picture of what they do, they are, they're in a business that people of Texas have a conern about.

And Mark, let me ask you, You looked at that video and you're good with it?

HALPERIN: I think the video raises a lot of questions and you and others have raised them.

PERRY: It does indeed. And I think you just answered the question for us. Thank you.

A few seconds after Perry's answer, Morning Joe co-host Mika Brzezinski said "Nice!" at how successful Perry was at turning Halperin's question around.

Scarborough gently asked Halperin to expand and comment on what Planned Parenthood did in “tearing fetuses apart so they can save this tissue.” Halperin seemed utterly incapable of mustering any outrage of their business in baby parts beyond many finding it “troubling.” Let’s guess Halperin isn’t one of them.

HALPERIN: Well, look, leave the politics aside for a second. There are obviously still a lot of ethical issues, medical ethical issues still around from the discussions we had back when President Bush was in office on stem cell research and other things, but the comments made in this video are troubling to a lot of people, not just Republicans, I don’t think for Governor Perry, I’ll say, but for others, it's a partisan issue, really, it’s not just a question of not just taxpayer money, but the question of ethics of a national organization that has the responsibility to do what’s right.  And I think this is a case where lots of people need to be involved in the debate, and Governor Perry have raised it, as have a lot of members of Congress, so that people can understand what is happening and debate whether it's the right thing for our society.