The weirdest thing about big-time reporters is that they trash-talk Republicans, saying that have yet to prove Joe Biden was involved in Hunter Biden's business dealings. Earth to big-time reporters: Isn't it your job to investigate that? Instead, they joined Democrats in impeaching Donald Trump for insisting someone should be investigating the Bidens.

On Thursday, The New York Times published a story at the top left of the front page headlined "The Tale of Hunter Biden To Come Front and Center." Inside, it covered two whole pages and part of a third. That sounds serious, right? But inside was this unserious passage: 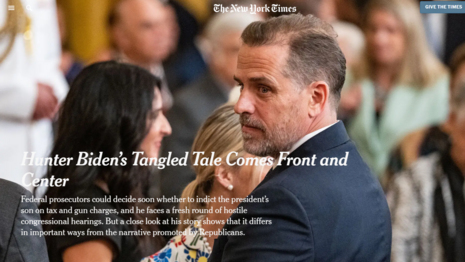 Despite their years of efforts — including Mr. Trump’s attempt to muscle Ukraine into helping him sully the Bidens, an escapade that led to his first impeachment — Republicans have yet to demonstrate that the senior Mr. Biden was involved in his son’s business deals or took any action to benefit him or his foreign partners.

This is false, and Hunter Biden's laptop had that information....if the leftist media hadn't so aggressively squelched it before the 2020 election and argued it had all the hallmarks of Russian disinformation. Then in 2022, the Times admitted oh -- there were authentic documents on it. They hadn't wanted to "sully" the Bidens by investigating.

Hunter Biden has always maintained that he avoided discussing his business activities with his father. But they sometimes came up, such as when the elder Mr. Biden found out about his son’s board seat at Burisma and called to say, “I hope you know what you are doing.”

Republicans have pointed to a series of encounters between the elder Mr. Biden and his son’s business associates to build a case that they were working with each other. The Bidens and many of their associates tell a different story, saying that the encounters were typically fleeting and involved no substantive discussions even if they provided Hunter’s associates with a degree of access to his father.

They admit Vice President Biden met with Burisma executive Vadym Pozharskyi in Washington and two of Hunter's Chinese business associates in Beijing. We're supposed to believe Biden staffers and associates that these were "fleeting" and unimportant. Obviously, showing that Hunter could provide access to Joe was part of his business. They certainly showed that Joe Biden typically lies by insisting he never discussed business with his son, including "what time do I show up to meet your friends?" They briefly touched on the allegations of Tony Bobulinski and the 10 percent for the "big guy," but only briefly.

The headlines inside was "In the Cross Hairs of His Father's Foes," and on the third inside page, "FBI and IRS Delve Into a Troubled Scion."

This caption appeared in large type over a picture of Joe and Hunter: "Regardless of what the Justice Department decides, Republicans who now control the House intend to intensify their scrutiny of Hunter Biden in a bid to inflict damage on his father as he prepares for a likely 2024 re-election bid."

The Times is transparently in the business of Biden damage control.

Investigative reporters Adam Entous, Michael Schmidt, and Katie Benner were on the case. But the tweets suggested the usual sympathy. Take Entous:

How pressure to make money, depression, addiction and self-destructive behavior put Hunter Biden in the crosshairs of the Justice Department. At his lowest point, he told a close family friend, “I know you all think the wrong brother died.” https://t.co/Jz03bIsBFH