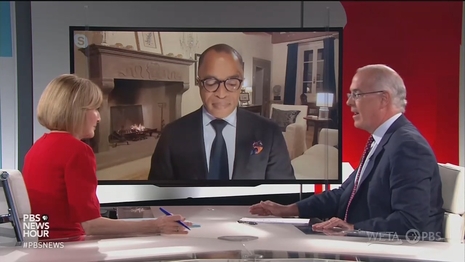 One of the silliest myths in TV newscasting is that objectivity is still a lodestar. As PBS NewsHour anchor Judy Woodruff was wrapping up her last show in the anchor chair on Friday, pundits David Brooks and Jonathan Capehart both pretended Woodruff exemplified neutrality.

Do they think Republicans never watch this show? NewsBusters has the truth on this. You can watch her trash Trump's COVID record with Vice President Mike Pence. It's nothing like the softness Woodruff has offered Hillary Clinton. Or Joe Biden. Or Adam Schiff.

After lauding her lack of ego, Brooks proclaimed “just finally, you have done it in a difficult moment in journalism, when we have had to be fair to everybody, be neutral and objective, but at the same time not be morally neutered, not not react when moral outrageous and cruelties happen."

CAPEHART: But you are such an avatar for the profession. You're someone who — you're inscrutable. There's no one anywhere in the country or the world who watches you who can tell what your views are. [!]

And let me tell you, for those who are watching, when I'm sitting at the table, and I'm looking at Judy, and I'm giving my opinion, she gives me this flat look, where I'm thinking ‘Does she think an I'm — she thinks I'm an idiot, or I don't know what she's thinking.’

CAPEHART: But that is the quintessential — that's quintessentially you, Judy. But I want people to understand that folks who — I'm on the opinion side. David is on the opinion side. Our job is to tell you what we think. Judy is on the news side. Her job is to tell you what is happening, and why it's happening, in the context of history and the context of the moment.

Her job is not to tell you what she thinks. And so, if you don't think, for real, that news side journalists don't take that job seriously, then just look at Judy Woodruff and her work, not just at PBS, but when she was at CNN and other places.

In the next segment, "fair and balanced"  and "Judy is the gold standard of trustworthy journalism." Then Woodruff closed with more blather about PBS neutrality:

I have tried to stay true to what the program's founders, Robin MacNeil and Jim Lehrer, believed so fiercely, that we're here to report, to tell you as accurately and fairly as we can what's going on in the world, and to let you make up your minds about what to think, and to have the courage, as my beloved co-anchor, Gwen Ifill, did, to ask the tough questions, to hold people in power accountable, and, I would add, to care enough about each one of you to respect you and your beliefs, what your lives are like.

If you think Woodruff asked the "tough questions" to everyone, you missed the soft soap for Jill Biden.

PBS NewsHour puffing itself up is brought to you....by you, the American taxpayer.