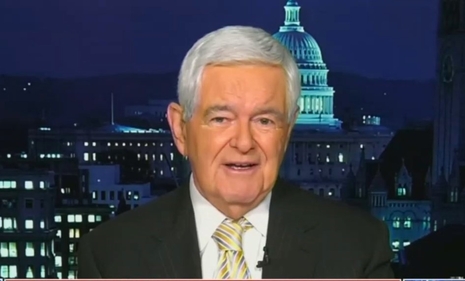 NPR interviewed Newt Gingrich for Friday's All Things Considered, ostensibly to underline how successful President Biden has been. Their headline at NPR.org was "Newt Gingrich thinks the GOP needs to stop underestimating Biden." Anchor Mary Louise Kelly couldn't help but steer the car into the woods when Newt said the 2020 election was "rigged," as in Twitter censorship and Zuckerbucks.

Kelly started down a well-worn path when she asked Newt whether Trump helped or hurt in 2022, and he said we was very helpful in some races, and not in others.

This is where the interview about Biden quickly went awry, as liberals are as obsessed with anyone claiming 2020 wasn't ideal.

KELLY: But that has been what he has wanted to talk about - I mean, his repeated false claims about a stolen election, which I have to note you supported and talked about and spread. That did seem to fall flat with midterm voters. Is - how big a problem is that for Republicans?

KELLY: I just need to pause you there because it's not me saying this. This is dozens of courts across the U.S. that have rejected claims of rigged elections.

GINGRICH: No, no. They rejected claims of stolen elections. Nobody ever looked at rigging.

KELLY: For the record, do you believe Joe Biden was legitimately elected president?

GINGRICH: For the record, I believe that he won under the terms that were set up, and I think that the entire elite system cheated in every way they could to defeat Donald Trump.

KELLY: I need to push you on this before we go on. I'm not hearing you say you believe he was legitimately elected.

GINGRICH: I believe he won under the rules, and I think that the system that elected him did everything it could to rig the game, including, for example, Twitter kicking off the incumbent president of the United States, kicking off the New York Post. I just did a podcast about this that we're releasing with a New York Post reporter who - Miranda Devine, who can walk you through step by step.

Newt wasn't so combative as to remind the NPR anchor that part of the "rigging" could be NPR and its "Public Editor" dismissing the Hunter Biden laptop as a time-wasting non-story, a "pure distraction." Then Kelly is just reeling, to the hilarious point that she says "I'm not debating you." Yes. You are.

KELLY: Let me focus you on where we are now because I heard you making the case that...

GINGRICH: You're the one who wanted to go back to the past. I'm happy to debate you about the nature of the 2020 campaign.

KELLY: I'm not debating you. I'm trying to figure out what you think and why. And I want to focus you on the point you were making about - whoever becomes the GOP nominee in the next presidential election, you would like to see them run - what were your words? - for the country. On policy. So lay out for me what you see that as - what that looks like.

Then the composure of NPR's anchor could be restored.

The audio is here:

NPR's website is being sponsored by the American Friends Service Committee, a leftist Quaker lobbying shop. They know who is dominant in the NPR audience.