Anonymous sources can cut both ways. After CBS anchor Norah O'Donnell sloppily tweeted an inaccurate claim that Trump was lying about the FBI taking his passports in the Mar-a-Lago raid, unnamed critics inside CBS pounced in a Tuesday New York Post story. 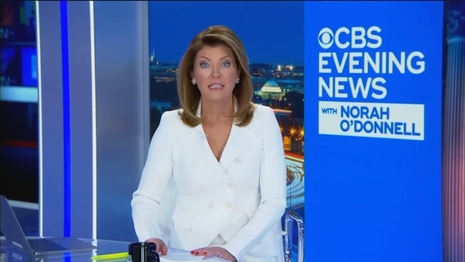 [T]he anchor attributed the information to a single source — a big no-no at CBS News, which has a strict two-source protocol, angry CBS sources told The Post. They added that the tweets also made it sound like O’Donnell was calling the former president a “liar.”

“This is an embarrassment for CBS that the face of your network can’t even make a second call to a Justice Department rep,” one livid source said. “It’s Journalism 101.”

The loathing of Trump routinely leads to sloppy, rushed reporting to paint Trump as perennially engulfed in damaging scandal.

NEW: According to a DOJ official, the FBI is NOT in possession of former President Trump's passports. Trump had accused the FBI of stealing his three passports during the search of his Mar-a-Lago home.

Team Trump responded with an email acknowledging they took the passports:

This is how Fake News works, folks. Biden admin actively feeds half truths & lies that the media willingly amplifies—advancing a partisan narrative to attack Trump.@NorahODonnell, did your “source” read you this email? Did you bother asking if they indeed seized the passports? https://t.co/DlzkagN0ie pic.twitter.com/VwCU7DPCvg

In a written statement to The Post, a CBS rep defended O’Donnell’s series of tweets.

“Donald Trump publicly alleged that his passports were ‘stolen’ and in the hands of the FBI. As part of the normal reporting process, our reporters inquired with the DOJ about whether they had Donald Trump’s passports,” a CBS rep said in a statement to The Post.

“They replied that they did not,” the rep added. “Our reporting reflected that; it was true then and it is true now that the FBI was not in possession of his passports at the time. And as the tweet thread makes clear, any items that were not contained in the warrant would be returned.”

“It’s still bad journalism,” the source punched back. “She didn’t ask if the passports were ever in their possession. She didn’t say ‘no longer in possession.'”

On Tuesday night, The Post Editorial Board piled on:

No sooner did we warn that the media was back to relying on dubious anonymous sources to pump up anti-Trump narratives than CBS Evening News anchor Norah O’Donnell proved our point.

“According to a DOJ official,” she tweeted Monday, “the FBI is NOT in possession of former President Trump’s passports. Trump had accused the FBI of stealing his three passports during the search of his Mar-a-Lago home.” No name for the source, of course.

Oops: Trump spokesman Taylor Budowich soon shared an email from the Justice Department admitting it did confiscate three of the ex-prez’s passports, “one being his active diplomatic passport.”

CBS lamely tried to cover, claiming the FBI no longer had Trump’s passports at the time O’Donnell tweeted. Sorry, no: She plainly was painting the ex-prez as a liar.

This follows breathless Washington Post and New York Times pieces similarly promoting the anti-Trump claims of anonymous government sources — despite all the corrections and retractions the papers have had to past stories that relied on anonymous liars.