George Will Dares to Expound on 'How the Media Polarized Us' 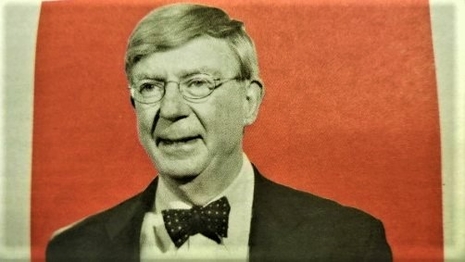 George Will almost sounded like a conservative columnist again in Thursday's Washington Post. The headline was "How the economics of news altered the news itself." Will was promoting as "newsworthy" an article titled "How the Media Polarized Us" by Andrey Mir in the Manhattan Institute's City Journal.

In his article, Mir blames the rise of the internet for depriving newspapers of advertising revenue. Classified advertising collapsed. Corporate advertisers realized Google was much better at targeting their potential customers. In 2000, advertisers gave newspapers $19.6 billion — about a third of papers’ revenue. In 2013, Google’s $51 billion in ad revenues eclipsed American newspapers’ total ad revenues of $23 billion. By 2018, revenue from the classifieds was just $2.2 billion.

So their business model shifted to rely on readers rather than advertisers. Mir asserts they went from journalism to "post-journalism," by which the media elite supply not news but “news validation.” Will summarized:

“Even the strongest American newspapers,” Mir says, “could not hold advertisers: the New York Times began getting more revenue from readers than from ads in 2012.” So, “journalism now sought new partners”: digital subscriptions, the multiplication of which could be driven by anger and fear, the fertilizers of polarization. Editors “agitated the digitized, urban, educated, and progressive youth to the point of political indignation.”

This trend began before Trump, but was exacerbated by Trump. Mir notes the younger progressives were the first to join social media en masse, but eventually older and more conservative Americans joined in.

Until then, the mainstream media did not have any commodity to offer their newly chosen referential group. Trump helped fix that. He became that missing commodity immediately after his shocking victory. The mainstream media understood the signal, upgraded Trump from amusement to existential danger, and started selling the Trump scare as a new commodity.

Will avoided the mention of Trump and his newspaper's pompous motto, even as he more selectively quoted the business model as "donations to a cause." As Mir wrote:

The media quickly learned to solicit subscriptions as support for a noble effort—the protection of democracy from “dying in darkness,” as the Washington Post put it. A new business model emerged, soliciting subscriptions as donations to a cause. Donations required triggers that the love-hate alliance of Trump and the media readily supplied. The crucial part of the new business model was not just Trump himself but the significant number of his supporters. The most terrifying thing was that fully half the electorate supported such a “monster” (in the view of the other half).