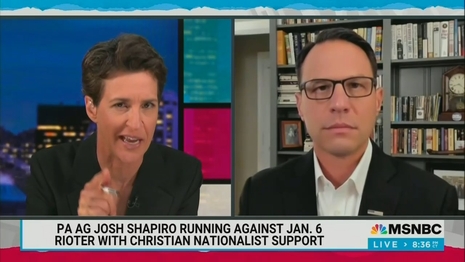 On Monday night, Rachel Maddow fulsomely interviewed Josh Shapiro, the Democrat nominee in the governor's race in Pennsylvania, about how his opponent Doug Mastriano is a dangerous, anti-democratic extremist, and never asked Shapiro why -- if he was such a danger -- Shapiro spent almost a million dollars trying to help him win the Republican nomination.

Shapiro spent $840,000 running ads calling Mastriano “one of Donald Trump’s strongest supporters.” The ad went on to say that Mr. Mastriano “wants to end vote by mail. He led the fight to audit the 2020 election. If Mastriano wins, it’s a win for what Donald Trump stands for.” Shapiro and the state Democratic Party sent out mailers boosting him.

It's cynical, but MSNBC doesn't think it's worth mentioning. This, obviously, is the same tactic the Democrats attempted with Trump in 2016, only to see it backfire in their faces. But Maddow will play the game of pretending they had nothing to do with this!

MADDOW: What I was talking about these developments in the news in the previous segment and in this introduction here, I kept finding myself stumbling over the word "nominee" because a lot of people can run for things. You know, a lot of people are candidates for anything, and you get all sorts of wheat and chaff  in large candidate fields. This is the Republican nominee for governor. This is who the Republican Party has chosen to run against you to become governor of the state. Is it possible that the Republican Party didn't know what they were getting into with him? Is this a form of radicalism and extremism for Mr. Mastriano that was not evident before they chose him to be their nominee?

SHAPIRO: No. Folks knew exactly who he was when he picked him. He received over 40% in a field of nine or ten candidates. This is the modern-day base of the Republican Party. Now the good news is many Republicans are breaking from him. We had just the other day nine Republican leaders in the state join our campaign. There will be many more to come, folks who certainly don't agree with me on every issue, but they know that what Mastriano is doing is a threat to our democracy. It's beyond the pale. It's not normal, and it should not be acceptable in our politics today. Democrats, Republicans, independents here in Pennsylvania are stepping up and saying that is simply too far. We don't want the kind of chaos he would bring to our politics here in Pennsylvania.

Shapiro ran an "Operation Chaos" in the race, spending money to make it possible that the "dangerous chaos" candidate won. And MSNBC is presenting this Fake News impression that he never wanted this to happen.

It's not the first time. Mediaite noted that Nicolle Wallace played this same kind of patty-cake with Shapiro on July 15.

It's not like this question couldn't be asked. CNN's Dana Bash asked it back in May. It's especially disingenuous to present this as something only the Republicans did.