Column: What Can't the Newspapers Put on Page One?

Way back in the 20th century, we learned in journalism classes that a news story assembles the facts in order of what’s most important to the public. But in this century, national newspapers too often assemble their information to pack a liberal wallop, and bury the information that, well – doesn’t serve the public, by their most compassionate “social justice” lights. 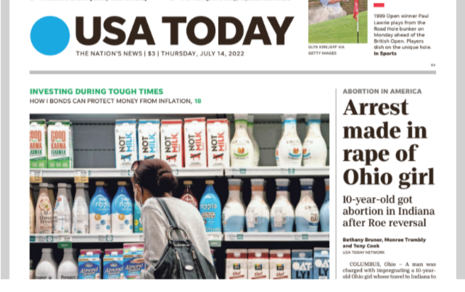 The July 14 USA Today provided a glaring example with all three of its front-page stories. At the top left was this headline: “Arrest made in rape of Ohio girl: 10-year-old got abortion in Indiana after Roe reversal.”

The story of a young girl crossing state lines for an abortion “quickly went viral,” the paper said. Her travel to Indiana “led to international attention and became a flashpoint in the national furor over the Supreme Court’s decision to overturn Roe v. Wade.”

Reporters Bethany Bruner, Monroe Trombly, and Tony Cook added “Gerson Fuentes, 27, whose last address was an apartment in Columbus,” was arrested “after police said he confessed to raping the child on at least two occasions.” But nowhere in this article was there any focus on his immigration status.

A source at Immigration and Customs Enforcement told Fox News that “Fuentes is a Guatemalan national in the country illegally and that ICE has placed a detainer" on him. In the Columbus Dispatch, these same three reporters noted Fuentes “is believed to be undocumented,” but McPaper left that snippet on the proverbial cutting-room floor.

The other story at the top of the front page was headlined “Inflation at 40-year-high, again.” Reporter Paul Davidson assembled his facts very, very carefully, The reader would have to make their way to the very end of the story on page 8A for any mention of politics or the president. It was paragraph 21: “In a statement, President Joe Biden called inflation ‘unacceptably high.’” Then paragraph 22 channeled Biden shifting the blame, that “it is hitting almost every country in the world” and “it is a reminder that all major economies are battling this COVID-related challenge, and Putin’s unconscionable aggression.”

Davidson ended with facts bolstering Biden, that inflation in Turkey is 80 percent, and “in the Eurozone, comprised of the 19 countries sharing the euro, inflation rose to 8.6%, the highest ever.”

The story on the bottom of the front page came from Akron: “Jayland Walker’s casket stays open at funeral.” The front page oozed that “his killing has led to national rallying cries for police reform. The family’s decision to show Walker’s body during funeral services reminded some of the choice by Emmett Till’s mother, Mamie Till-Mobley, in 1955 that helped galvanize the national civil-rights movement.”

Till was lynched by two white men at age 14. Somehow the Akron police are comparable.

USA Today waited until inside the paper to note Walker was shot 60 times “after a car and foot chase.” Did Walker shoot a gun? “He wasn’t armed when he was shot, but authorities said Walker, 25, fired a shot from his car 40 seconds into the chase. The police footage shows Walker wearing a ski mask [in June], jumping out of the front passenger door of his moving car, then running into a parking lot.” They found a gun in the car. This was only two paragraphs of a 21-paragraph story that mostly stuck to a modern Emmett Till narrative. One mother said “This is a fear that I have, that police will shoot my boys.”

Anyone who only read the front page of McPaper on this day would receive carefully laundered details. Casual readers might even feel misinformed.