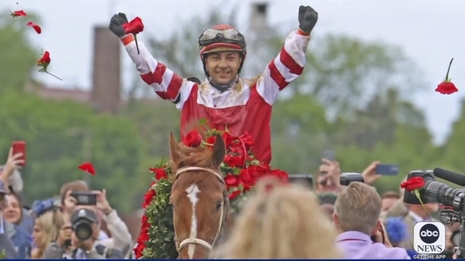 The Democrat "fact check" website calling itself PolitiFact is so fervently dedicated to defending President Biden that it's repeating its lame fact checks of previous Kentucky Derby jokes. On Monday, staff writer Monique Curet threw a "Pants on Fire" rating at a Facebook user named Eddie Foley -- with about 1,300 friends at this juncture -- for repeating a joke about Biden being insulted as a "horse's ass."

But we MUST know this remarkable upset on Saturday was not somehow marred by anti-Biden remarks:

But there is no evidence that Leon made that remark about Biden, based on Leon’s Twitter profile, video footage of his post-race comments and jockey comments released by the Derby. We also did not find any credible stories that included those remarks.

There also is no evidence — such as White House press releases or credible news stories — that Leon received or declined an invitation to the White House.

The jockey who won the 2022 Kentucky Derby didn’t get invited to the White House or insult President Joe Biden, contrary to social media claims. The same claim has circulated in previous years about other jockeys. https://t.co/P2CavufqVG

Curet reported PolitiFact barked fiercely at this Biden joke for the second year in a row!

In 2018, in what was clearly a joke, the same quote was attributed to the horse, Justify, that year’s winner of the Kentucky Derby and the prestigious Triple Crown, awarded to a three-year-old Thoroughbred horse that wins the Derby, the Preakness Stakes and the Belmont Stakes in a single season.

"Breaking: #Justify turns down invitation to White House," read one June 9, 2018, viral tweet. "Asked why, the #TripleCrown winner said,"If I wanted to see a horse’s ass, I would’ve finished second." At that time, former President Donald Trump was in office.

In 2021, the joke eluded folks when it was changed to falsely attribute the quote to a real person: jockey John Velazquez, who won the Kentucky Derby that year.

But Velazquez didn’t say it and neither did Leon.

We rate this claim Pants on Fire!

All this makes you laugh at the claims THEY make on social media about how they do "honest, independent reporting" to "hold people accountable." They take money from Facebook to police any mean-spirited comedy about their beloved chief executive.

Honest, independent reporting will ensure communities across the country have the facts to govern themselves and hold people accountable for their actions. Give now to PolitiFact. https://t.co/HojffmOLxO