On Friday, Fox News media reporter Joseph Wulfsohn reported that since Wednesday evening, when the New York Times report admitting the Hunter Biden emails on his abandoned laptop were real, ABC, CBS, NBC, MSNBC and CNN gave it "zero attention" Thursday or Friday. This is also true of the PBS NewsHour. 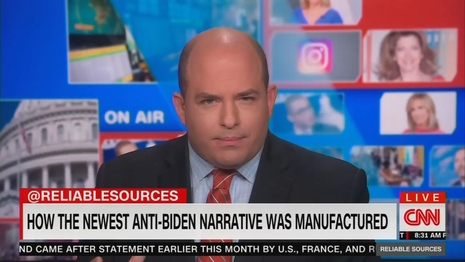 Wulfsohn added that "CNN media correspondent Brian Stelter also ignored the Times report in his media-centric 'Reliable Sources' newsletter, but managed to squeeze in a mention about Meghan Markle's newest podcast." (The avoidance continued in their Friday night newsletter by Oliver Darcy.)

It's quite a contrast with Stelter's show on October 18, 2020, when Stelter mocked the New York Post story as an invention: "Let's take a look at how a story line is manufactured, in this case, a loudly anti-Biden storyline redounding to Trump's benefit. First, it helps to really view this as storytelling, not so much news coverage, but as political entertainment where crushing the other party is entertaining."

This story was compared to TV dramas like Game of Thrones, designed to squeeze ratings and help conservatives "stay mad and stay tuned." He suggested that the story had to be false because it was being pushed by Trump die-hards.

STELTER: Now, we already know some of the American producers of this drama, because the New York Post says it was tipped off to the existence of the e-mails by Steve Bannon, Steve Bannon. Then Rudy Giuliani gave the post a copy of a hard drive containing the e-mails.

Now, here's where it gets even weirder. The Post claimed that the emails were found on a laptop computer that was brought to a repair shop in Delaware in the spring of 2019. And a shop employee saw the emails and then was worried about getting in trouble or getting in danger and he made copies of them. There's a lot about the story that does not add up. And the employee has not helped matters. He has contradicted himself in interviews with reporters. And I mean, for all we know, these emails are made up or maybe some are real, and others are fakes. We don't know. But we do know that this is a classic example of the right-wing media machine.

Around the same time in 2020, Stelter yelled at reporter Susan Ferrecchio in a BBC interview when she suggested CNN lacked ethics on their Russian collusion pushing. “How dare you! Don’t you dare! Don’t you dare act like newsrooms didn’t have ethics in 2017 and 2018,” Stelter interrupted.

PS: Liberal networks like MSNBC like to discuss Hunter Biden only as a fixation of crazy right-wingers, like he's a fictional character of some kind. On Tuesday's Deadline White House, MSNBC's Q-Anon tracker Ben Collins talked about the biolabs in Ukraine and dragged in the embarrassing Biden offspring:

I will say, this specific thread of this conspiracy theory, where there is this map of the biolabs and they said, you know, Anthony Fauci or Hunter Biden or somebody is involved in making these biological weapons, this is an American far-right idea, spawned from the anti-vax communities on the internet and Q-Anon communities.