For his reliably liberal Reliable Sources program, Brian Stelter brought on former Clinton press secretary Joe Lockhart (wearing his Tom Brokaw glasses) to argue that somehow, the press is "failing" to treat Joe Biden fairly. Apparently, he's supposed to be getting even more positive press than he's received because he deserves a "truth and decency dividend" for being the anti-Trump.

This is hilarious, since the networks energetically buried not just his terrible year-end polls, but the ongoing chaos at the border.

Brian Stelter sets up "Democrat point of view" on press and Biden. Joe Lockhart said the press has FAILED, they're treating Biden unfairly! They're too snarky, and they're not airing Jen Psaki's "truth" briefings live!

LOCKHART: Listen, I think the press is failing. They're treating him unfairly.

First off, there ought to have been a dividend for returning truth and decency to the White House, and we didn't get that, we didn't get it at all. We've kind of returned to the snarky interviews that we saw with Trump, and in respects to Obama.

And I will give you examples about some of the decisions that get made. As I said, from the very first briefing, the Trump spokespeople lied. They lied every day, every briefing. And the majority of those briefings were aired live on television.

Jen Psaki is in there now telling the truth. She's telling us what's going on in the government, what people need to hear, and they're rarely on live television. So that tells me this is more about entertainment than it is about news. It's more about getting viewers than letting people know what's going on in the country. And that's a failure as far as I'm concerned.

Stelter didn't get defensive about CNN ignoring the Psaki briefing. It might just be their way of avoiding putting Peter Doocy questions live on CNN. At least Stelter asked Alyssa Farah Griffin about the lack of press conferences. She didn't exactly attack the White House for hiding Biden. 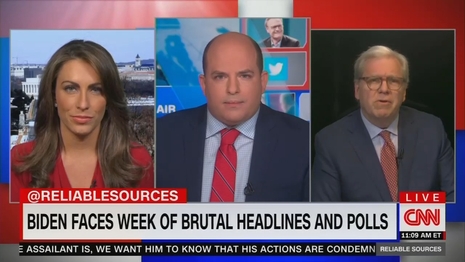 STELTER: Press briefings every day, press conferences very irregularly. Let's look at the past, the few presidents will show compared to Biden. Biden's been holding formal press conferences less often, there's the data. However, he does hold informal Q&As quite often, more than past presidents, where he answers a few questions from the press corps after the event. So, that's the data.

Now, we have a formal press conference coming up here this week, it's been announced almost a week ahead of time. What do you make of that strategy, Alyssa?

GRIFFIN: It kind of goes against my PR 101. You just don't know what the news cycle will be so to announce it this far in advance kind of builds expectation. But, look, any time the president is talking to the American people and taking questions from the press is a good thing.

Biden's challenge is this, there are -- you know, his press secretary does speak to the press daily. That is a good thing. But they're very confusing and conflicting guidances going out around COVID. He needs to be answering the questions more regularly.

At least Griffin rebutted the "decency dividend" junk: "I would disagree with Joe. I think that Biden was very divisive this past week. Listen, there's no comparison to Donald Trump, that's not what I'm suggesting. But he's a man who ran on unity and being the president to all Americans and you cannot outright dismiss 50 percent of the country."

This segment was brought to you in part by Prevagen. Joe Lockhart could use that to be mentally sharper and realize the media has been plenty pro-Biden so far.