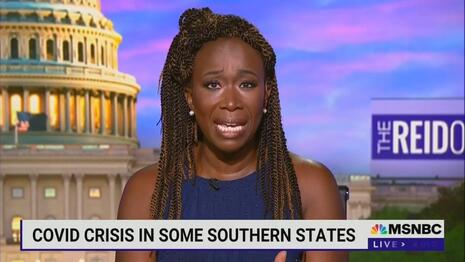 On her hourlong freakout The Reidout on Tuesday, MSNBC's Joy Reid smeared Florida Gov. Ron DeSantis as "Dr. Death," who is "pro-COVID" and "rolling out the red carpet for this ravenous virus."

Reid also slammed South Carolina and Texas for "rolling out the red carpet" for coronavirus infection and death.

REID: In a disturbing flashback to the spring of 2020, Broward Health Medical Center is adding temporary mortuary facilities. And despite all of this unnecessary death and agony, Florida Governor Ron DeSantis, who has emerged during this pandemic as a kind of Dr. Death, continues to wage his war not against the virus but against the people who are fighting to stem the tide of this Delta tsunami. And people are getting frankly tired of it.

A new Quinnipiac Poll of Floridians shows that 59 percent of the adults say the COVID situation is now out of control. Local officials and corporations are also losing patience with a seemingly pro-COVID governor.

Reid, a Florida native, noted major Florida employers like Disney are mandating vaccines for workers and for their cruise passengers. "And today the Broward County School Board refused to back down on their mask mandate. They could be fined up to $31,000 for daring to protect the lives of the kids in their district. Just take that in for a second. They're being punished for protecting children."

She added "Clearly, DeSantis isn't the only governor rolling out the red carpet for this ravenous virus. In July, the South Carolina legislature passed a law prohibiting schools administrators from requiring masks. Over the past two weeks, South Carolina's COVID death rate has risen 278 percent."

That sounds dramatic. BlackEnterprise.com used that number. But they linked to the New York Times, which shows that the seven-day average of deaths in the state went up from 11 per day to 29. That's out of a population of 5.1 million people.

Reid interviewed two energetic mask-mandate advocates, Broward County School Board chair Rosalind Osgood and Michael Hinojosa, superintendent of Dallas schools. She threw this softball to Hinojosa:  "Talk about what your school district is doing in the face of a governor that would rather fight you than fight the virus."

Meanwhile, liberal doctors on Twitter are showing maps that also show blue states like California and New York in the delta danger zone:

#DeltaVariant is causing this #COVID19 surge across all 50 US states—even in heavily vaccinated ones. Vaccines definitely work, but we have to dispel the notion that 1 shot for 70% is enough. We likely need 85%+ double vaccinated coverage with 2x more contagious Delta. Stay safe. pic.twitter.com/m0RqRH53A7

But Reid ended her segment with more slamming Texas for not letting their roaming Democrats win on voter ID rules: "I will note that that special session, we talked about it yesterday, did not include any measures that would protect children in the state of Texas from dying of COVID. COVID was not on the agenda. All that was on the agenda was a lot of Republican sort of talking point of materials, including stopping people of color for voting, because, of course."