We noted CNN reporter Clarissa Ward’s strange statement on Monday about the Taliban: "They're chanting death to America, but they seem friendly at the same time." Washington Times columnist Tim Young mocked this on Twitter:

The Taliban are sooo "friendly" that the female CNN reporter went from dressing like a free woman to covered head to toe in black in 24 hours because of... I guess... "friendship." pic.twitter.com/5I0206cRhD

Then on Tuesday, AP Fact Check leaped into action, claiming it was “missing context”!

CLAIM: Photo shows CNN journalist “covered head to toe in black in 24 hours” after Taliban took over in Afghanistan.

AP’S ASSESSMENT: Missing context. Two photos of Clarissa Ward, chief international correspondent for CNN, circulated on Twitter -- one where she wears no head covering and another where she wears an abaya. Social media users suggested that this shows the contrast of life before and after Taliban rule.

But AP claimed: "Some social media users criticized the offhand comment, including Texas Sen. Ted Cruz. Other posts misrepresented Ward’s reporting.”  They quoted Young’s tweet, but they didn’t link to it and classified him only as a “social-media user.” They didn’t even specify it was Twitter! That’s a weird lack of specificity.

Young didn't "misrepresent Ward's reporting" at all. He mocked the idea that the Taliban were friendly to female reporters from America. AP was covering for colleagues at CNN, touting Ward’s defensive tweet:

This meme is inaccurate. The top photo is inside a private compound. The bottom is on the streets of Taliban held Kabul. I always wore a head scarf on the street in Kabul previously, though not w/ hair fully covered and abbaya. So there is a difference but not quite this stark. pic.twitter.com/BmIRFFSdSE

The meme is NOT inaccurate. If a female reporter has to dress head-to-toe in black, it's not "friendly," and it's not "dressing like a free woman," as Young noted.

On Wednesday, AP itself ruined its own "Fact Check" by adding the "context" that the Taliban weren't being friendly to Ward and her team at all!

NEW YORK (AP) — Clarissa Ward described on Wednesday how a member of her CNN crew was nearly pistol-whipped by a Taliban fighter as they were covering a tumultuous scene outside the airport in Kabul.

“I’ve covered all sorts of crazy situations,” Ward said in a report that aired on CNN. “This was mayhem. This was nuts.”

...At one point, she said, a Taliban fighter shouted at her to cover her face or he wouldn’t talk to her. He was carrying a makeshift whip with a heavy chain and padlock.

The CNN producer, Brent Swails, was taking video with a cellphone when two Taliban fighters approached him with their pistols and seemed about to strike him, Ward said, making a motion with her arms to simulate it.

But they seem kind of friendly, she had said!

The AP article ended with Ward saying she was OK with suddenly dressing head to toe in black: "I have to be willing to wear whatever it takes, honestly, to be able to go out and do my job and respect the tradition of whatever culture it is I’m reporting from.” But that "culture" is obviously enforced ruthlessly. Feminists generally don't "respect" it, even if they observe it.

The AP "Fact Check" supporting CNN was also reinforced with a Twitter moment: 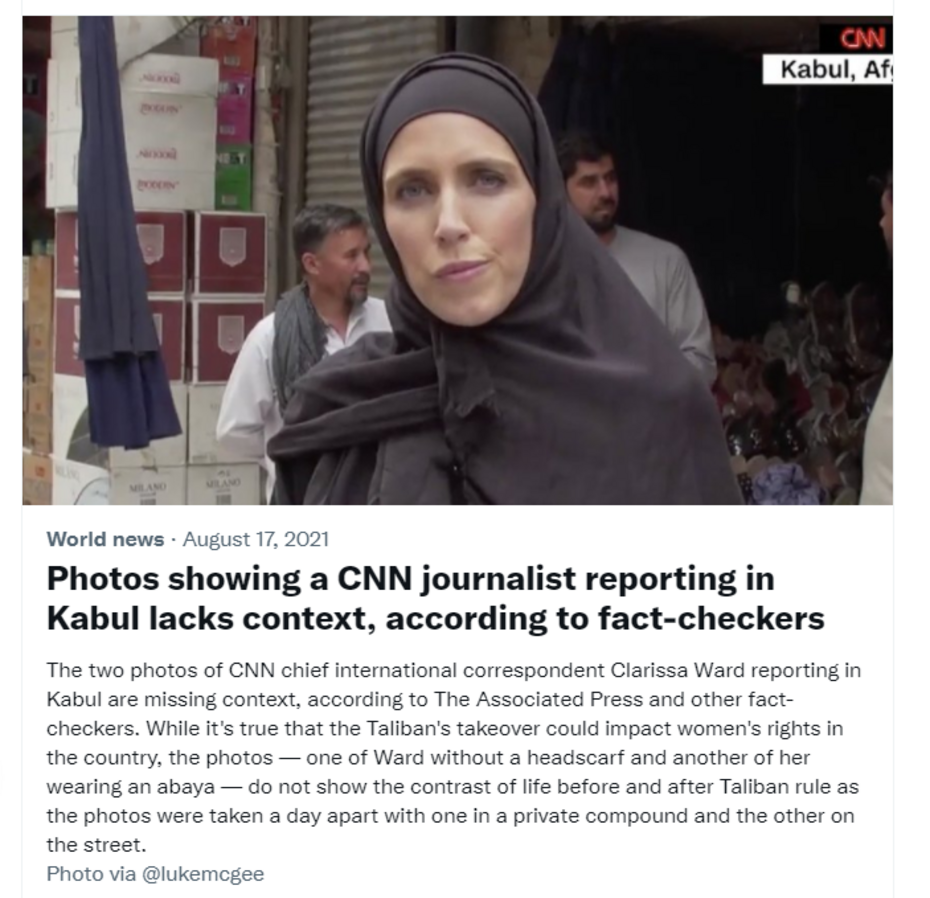 Ward reported courageously from a dangerous scene, but the "fact checkers" and their social-media amplifiers can't handle anyone who mocked the idea the Taliban were friendly. By Saturday, Ward decided to fly out of Afghanistan. Another Twitter Moment: 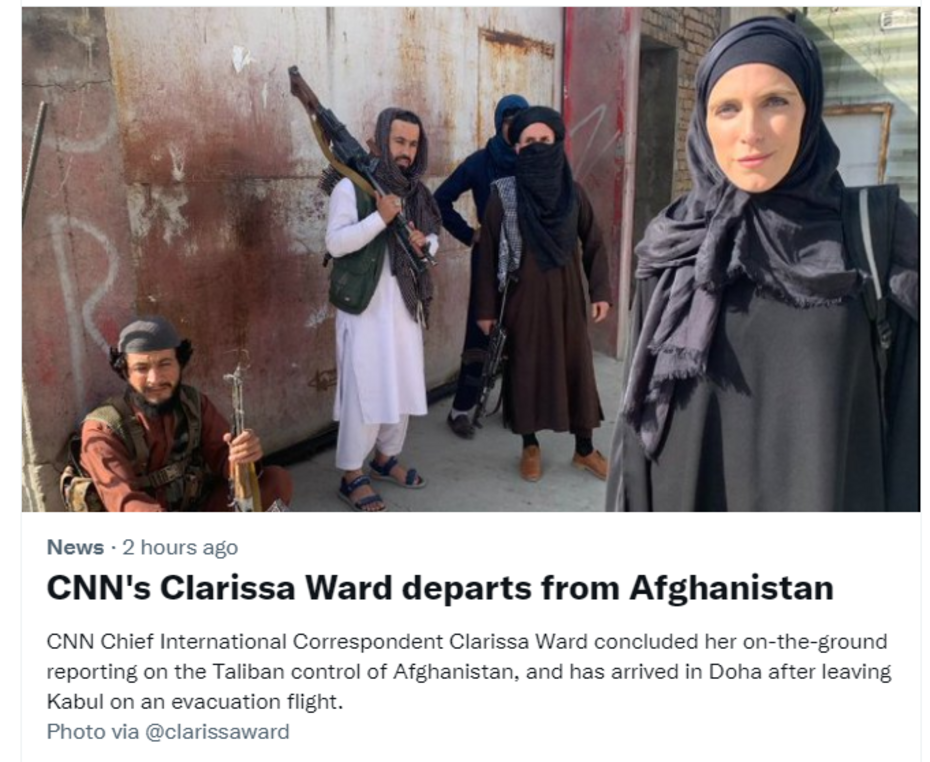