This Is CNN: Militants Chant 'Death to America,' But 'Seem Friendly at the Same Time'

CNN's Media Unit was incredibly unhappy on Monday when conservatives on Twitter mocked CNN reporter Clarissa Ward reporting from Kabul on New Day: "They're chanting death to America, but they seem friendly at the same time. It is utterly bizarre."

It is bizarre to imagine you'd feel it's a friendly reception when people wish death on your entire country.

Clarissa Ward donated $500 to Obama (and Biden by extension) in the fall of 2008 when she was at ABC. In the Reliable Sources newsletter, CNN's Oliver Darcy cast Ward's critics as irrational people freaking out, in a way that was freaky: 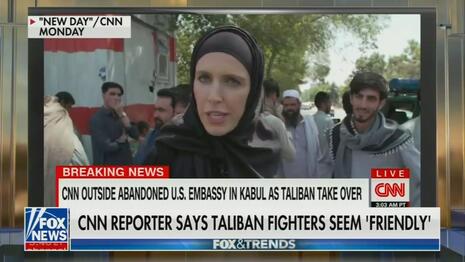 Every rational person recognizes that Clarissa Ward and her team have been doing a phenomenal job on the ground in Kabul. That's what made the right-wing media freakout so, well, freaky on Monday. Numerous MAGA personalities dishonestly took a sound bite from one of her packages out of context to suggest that she was a Taliban sympathizer. When Ward tried to bring nuance to a story and make a point about how the Taliban were bizarrely chanting "death to America," but also attempting to appear friendly at the same time, bad-faith actors attacked.

On Twitter, Ted Cruz retweeted the Ward video clip from Jack Posobiec with the line "Is there an enemy of America for whom @CNN WON’T cheerlead? (In mandatory burkas, no less.)"

The @CNNPR account shot back "Rather than running off to Cancun in tough times, @clarissaward is risking her life to tell the world what's happening. That’s called bravery. Instead of RTing a conspiracy theorist’s misleading soundbite, perhaps your time would be better spent helping Americans in harm’s way."

One can grant the courage of any reporter setting foot into a dangerous foreign scene...but that doesn't mean they're immune from criticism. Ward's reporting in Afghanistan hasn't been "cheerleading" in general, but for decades reaching back to when Ted Turner was the owner, CNN has thought of itself as an "international" channel that somehow floats above America and its grubby military adventures.

This is a feature of CNN, not a bug. Back in March, CNN's Nima Elbagir interviewed a spokesman for the Iranian-backed Houthi militants waging a civil war in Yemen. She asked "One of your key slogans talks about death to America. How do you see this as pushing forward the negotiations and the possibility of piece in the future?"

CNN host Erin Burnett also uncorked this on a Republican congressman in January 2020: "I will say I was in Tehran when they were chanting "Death to America" once. I was at a rally -- the people couldn't have been more friendly to me personally as an American. It sort of felt like a -- it felt like a thing and a trope, as opposed to anything that actually was seriously meant and considered."

It also reminded us of Elizabeth Palmer reporting from London for CBS in 2015, when the Obama-Biden team had negotiated an arms deal with Iran. It was a little embarrassing that Iranians chanted "Death to America" after this bowing to Iran, so she announced "At Friday prayers there was the usual chant of death to America, but more [out of] habit than conviction."

Why always downplay the sincerity of "Death to America"?

Ward was not alone at CNN in finding friendly Taliban surroundings, as our eagle-eyed Curtis Houck discovered:

CNN's Nick Patton Walsh: "[The Taliban] have maintained today, as far as we can see, calm & order inside the capital. Remarkable sight, frankly, to drive down the street & see Taliban...carrying their guns in broad daylight...They are, it seems, keeping a degree of calm" (2/2) pic.twitter.com/HeAQxAmmV4

CNN's Darcy also pointed out that fellow liberal Tom Jones at the Poynter Institute wrote a gushy passage about how CNN is somehow perfectly equipped for foreign coverage: "In times like these, it’s evident that no US network is more equipped to cover such a major international and national story quite like CNN." Jones touted Ward and Walsh as "outstanding."